With the Dow Jones Industrial Average, Standard & Poor's 500 Index and Nasdaq Composite Index all closing below key levels, I'm getting a lot of questions from investors. And the most-frequent query is this: "How low can it go?"

If you're a serious investor, you'll want to know where the markets are headed and what the maximum downside could possibly be. I've got some good answers for you. Let me show you some key numbers.

In a talk I gave last November, I warned that 1,329.26 on the S&P 500 was essentially a "trigger point" at which we'd start to hear recessionary talk from the U.S. Federal Reserve. And I stunned my audience when I told listeners we'd be down to that level by the middle of January. 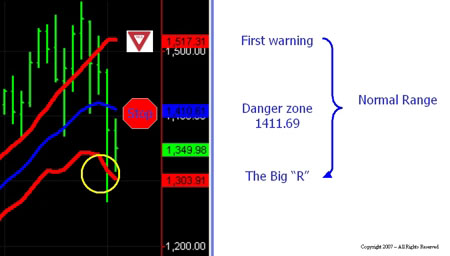 The bottom line: The S&P 500 closed Friday at 1,293.37, which means we can expect a whole new round of hand wringing from the "Inside the Beltway" crowd. Unfortunately, what we really need is for them to launch a carefully considered, decisive response to the problems at hand.

As for me, I'm now watching for the key Standard & Poor's stock index to hit 1,291.02. If we drop below that level in the next few days – and if there's no decisive countermove from central bank Chairman Ben S. Bernanke – my proprietary analytics suggest the S&P may retreat all the way down to 1,117.43.

Fortunately, there's an easy and painless way to escape this pain.

Let me review some important steps for you to consider:

I'm certainly not suggesting that a 1929 "Great Crash" is right around the corner. But there's little question that the markets will stumble around for some time. The credit crisis that started with the subprime-mortgage meltdown is nowhere near finished. My own metrics show that this could become a trillion dollar problem. If that happens, it is going to take time for the markets to work their way through it.

But no matter how low the markets go, Money Morning will be here to help and keep you informed of the latest market news. [Editor's Note: To read Keith Fitz-Gerald's Money Morning research report, "Five Survival Strategies That Will Allow You to Profit Even in a Recession" please click here. The report is free of charge.]