The moment Beijing won the right to host the 2008 Summer Olympics, the Chinese government embarked on an ambitious cultural etiquette program designed to make Beijing more hospitable to the 500,000 foreigners expected to visit for the Games, which start only weeks from now.

And from the looks of things, such obvious niceties as...

On that point, at least, China's leaders aren't acting a moment too soon.

When Cultures Connect - or Collide

It can be quite difficult for English-speaking visitors to keep a straight face when placing an order at a luncheon business meeting in China - given such menu choices as "chicken without sexual life" (Translation: Chicken that's very tender because it was too young to reproduce when it was turned into a roaster), or "wood flower picks sea cucumber hoof." At the same time, for veteran travelers such as myself, there's also a certain fondness for these descriptive dishes. It's part of the culture.

Which is why I'm torn after hearing reports that such listings as "the farmer is small to fry king" may vanish from my favorite restaurant menus along with the "fragrant spring onion sauce explodes the cow son." And let's not forget the perennial classic - "retchup" - either.

But all joking aside, this is the kind of change that is emblematic of China's emergence on the world stage. And it's an important sign for investors that things are proceeding as planned. China's leaders understand the new role their country will be playing - a role that will result in much greater visibility and far more stringent scrutiny, part and parcel of the global power and influence the country will very soon possess.

Particularly in Asia, as much as language reflects a culture, it also reflects change and frequently mirrors the underlying social and economic agenda long before the results show up in company share prices.

And while anthropologists and etymologists study the former (language reflecting culture and change), investors should anticipate and then study the latter (economic shifts and resultant escalations in market prices). The reason: China's history (and, indeed, the history of other nations, as well) is filled with linguistic examples that precede massive economic change and growth - for better or for worse.

In a Money Morning report just last month, I made a similar point by demonstrating how language subtleties actually alerted Asian observers of a major change in Sino-Japanese relations - a historic development that the Western media largely missed.

The current changes involve only China, but are no less important - or telling.

For instance, Chinese texts show that words like "grape," "pomegranate" and "lion" entered the picture back during the days of the fabled Silk Road. Indeed, they actually preceded the first great wave of foreign trade centuries ago.

Other so-called "loan words" in more recent times reflect the growing interaction between countries in the Asian Rim - especially Japan - during the late 1800s. That, too, presaged a new blossoming of China's society at the beginning of the 1900s.

And while there is great debate about who borrowed what from whom, modern Chinese language reflects entire concepts borrowed from the Japanese language that have been transformed into something called wasei-kango (literally Japanese-made Chinese). Words like diànhuà (denwa, "telephone"), shèhuì (shakai, "society") are great examples.

According to Chinese and Japanese academics who study this sort of thing, there have even been cases where words have gone from Chinese to Japanese and back again. One such example is jīngjì (keizai). In original Chinese, it meant "the workings of the state." But it was narrowed to mean "economy" in Japanese before making the full circle to be re-adopted as part of the modern Chinese language, according to Wikipedia.

Lately, there's been a whole host of Chinese words emerging as a result of increased western contact and/or influence. Examples include:

Not to mention China's "taikonaut," which is the English nickname for Chinese astronauts known as yǔhángyuán, or "travelers of the universe."

Not surprisingly, these new words mirror the emergence of consumerism and technology  - trends we've been following closely as we invest in China.

As new words develop and new slang enters the lexicon, we'll be watching carefully. Not only because these will be interesting in and of themselves, but because of what they suggest about future business trends.

In the meantime, I'll be in the Hall of Mental Cultivation (Yangxindian)... 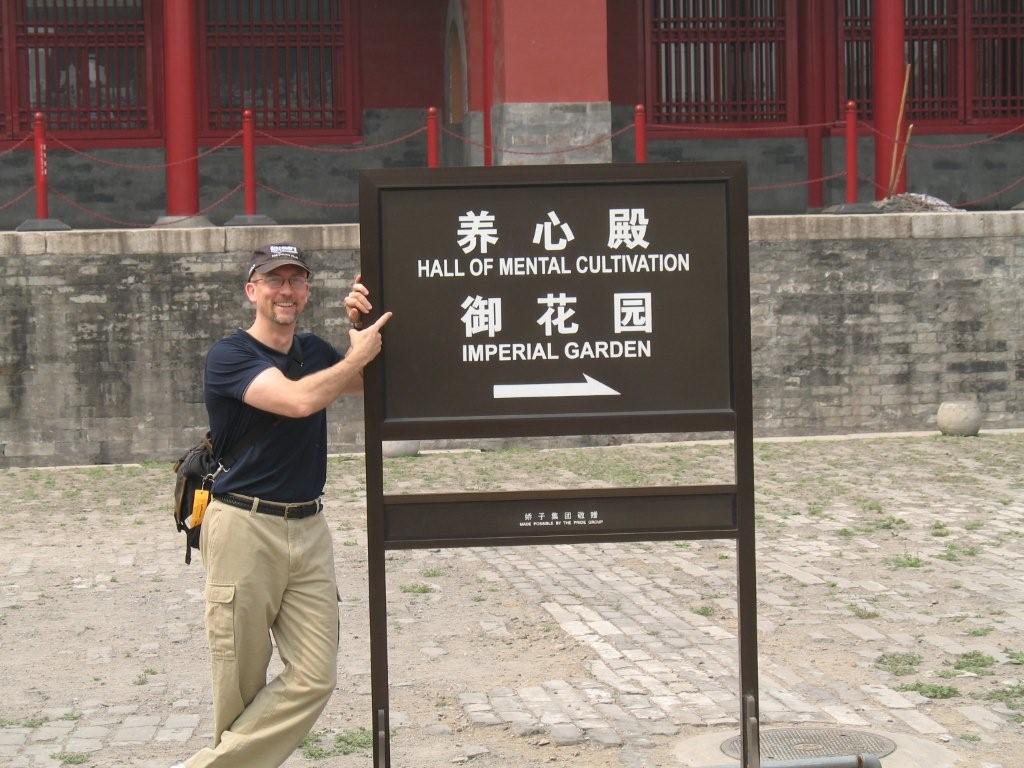 Money Morning Investment Director Keith Fitz-Gerald studies a sign for the Hall of Mental Cultivation in China's historic "Forbidden City" in Beijing, China, this past spring. Fitz-Gerald was in China to lead an investment tour of subscribers from Money Morning and The Money Map Report. Fitz-Gerald also is the editor of the specialized trading service, The New China Trader.