Stocks moved lower for the third consecutive day on Friday, something that hasn't happened in more than three weeks, as the bulls just couldn't capitalize on a short-term overbought condition. Measures of selling pressure eased as the bears rested their knuckles after a two-day pummeling.

Investors are worried. The big question – as always – is whether the primary uptrend remains intact.

And the answer is yes.

To understand just what that target should be, let’s take a look at where we are right now.

Just before Wednesday's sell-off, measures of the supply of stocks moved to new lows, while demand moved to new highs. This means bull-market-trading rules remain in effect. But as the cyclical bull market matures a little, we need to change the target of our buying efforts.

Although it looked like losses would be cut in the early afternoon, a lack of demand resulted in the major U.S. indices settling gently at support near the high end of the August trading range. The Dow Jones Industrial Average lost 0.4%, the Standard & Poor’s 500 Index lost 0.6%, the Nasdaq Composite Index lost 0.8%, and the Russell 2000 lost 0.5%.

All the major sector groups save healthcare finished in the red. The declines were the most severe among industrial conglomerates. The Industrials Select SPDR (NYSE: XLI) lost 1.4% thanks to a 2.5% fall in Textron Inc. (NYSE: TXT). Bank stocks were also weak as Bank of America Corp. (NYSE: BAC) dropped 2.2%. Defensive healthcare and utilities stocks were relatively buoyant with a gain of 0.1% for the Healthcare SPDR (NYSE: XLV) and just a 0.3% loss for the Utilities SPDR (NYSE: XLU).

Homebuilders were under some heavy selling pressure over the past week, likely the consequence of the U.S. Federal Reserve's decision to slow its purchases of mortgages. By spending $1.45 trillion, the Fed kept the difference between mortgage rates and the yield on U.S. Treasury debt very low.
Now, as these purchases taper off, mortgage rates will creep higher and erode some of the awesome affordability levels that are driving buyers to take advantage of the government's first-time homebuyer tax credit and stabilize the housing market. As a result, the iShares U.S. Home Construction ETF (NYSE: ITB) lost 2.7% on Friday and dropped 8.3% last week.

The declines of the past week have been in alignment with our expectation of a short-term correction before equities push on to what should be a more meaningful top near the 1,200 level on the S&P 500. A number of technical indicators, including the percentage of stocks over their 10-day moving average as well as breadth and volume measures, had begun to deteriorate after having moved well into overbought territory the prior two weeks. 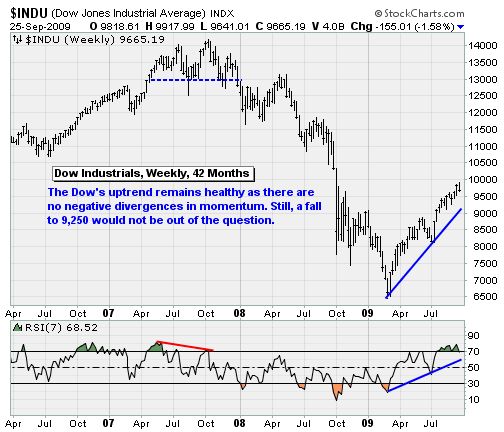 We aim to run our portfolios for long-term holds during bull markets, so although we warned of weakness ahead we did not expect it to be serious enough to merit exiting positions. Still don't.

The big question – always – is whether the primary uptrend remains intact. And the answer is yes. Just before Wednesday's sell-off, measures of the supply of stocks moved to new lows, while demand moved to new highs. This means bull-market-trading rules remain in effect. But as the cyclical bull market matures a little, we need to change the target of our buying efforts.

However dramatic the action of the past few days has been, it is a sign that some normalcy is returning to the equity markets. Moving forward, it is unlikely we will see long strings of uninterrupted up days, super-strong performance in the lowest quality stocks, and high correlations between stocks. In the final push to the stimulus- and recovery-Fed reaction high that we will likely see over the next three months or so, the emphasis may shift to fundamental analysis and quality. 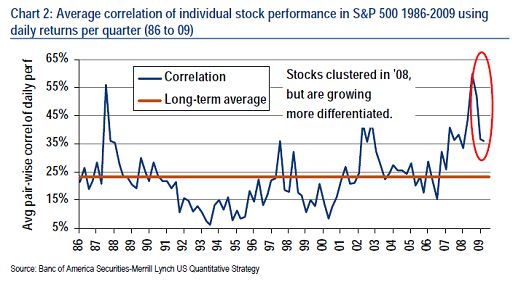 As you can see in the chart above, stock-performance correlations tend to spike during times of economic stress. When investors enter panic mode and analyst estimates become much less accurate, the focus shifts from individual assets to asset classes and broad sectors of the economy. In other words, when all hell breaks loose investors don't differentiate between great companies and good companies – they throw them all out.

Once this unease subsides and economic volatility wanes, fundamental analysis once again becomes the most important driver of investment performance.  And that's okay, because there will be plenty of opportunities as investors shift their focus from stocks that were priced for Armageddon to stocks that are poised to benefit from renewed economic expansion.

The foundations for the transition are already being laid: UBS AG (NYSE: UBS) analyst Jeffrey Palma notes that after nearly a year of downward revisions to earnings, analysts are starting to upgrade their forecasts for 2010. Estimate rebounds are largest in the cyclical materials and retail sectors. Breaking it down by region, the most promising opportunities are in commodity-related stocks in the United States, consumer stocks in Europe, and British banks.

We have recommended SPDR Metals & Mining (NYSE: XME) in our Strategic Advantage service as a great vehicle to play this trend, even though it stumbled last week. Another good one is iShares Australia (NYSE: EWA). Check out our newsletter for a much-expanded list of recommendations.

Monday: The index of leading indicators jumped 0.6% in August after a 0.9% jump in July and a 0.8% jump in June. The indicators' August performance represented the fifth consecutive monthly increase. Moreover, the 4.7% increase during these five months was the strongest showing since early 1983, which marked the beginning of one of history's greatest bull markets.

Tuesday: Home prices backed by Fannie Mae or Freddie Mac jumped 0.3% in July. There were also indications that retail sales plummeted in the week following the Labor Day Back-to-School blitz.

Wednesday: The Federal Reserve announced it would leave interest rates unchanged. Stocks initially bounded higher before abruptly shifting direction and screaming lower. The bulls gunned the Dow Industrial Average close to the 10,000 level before things fell apart. At issue wasn't the Fed's target policy rate, which affects short-term interest rates. Instead, traders were apparently concerned that Fed chairman Ben Bernanke and his cohorts failed to expand its direct purchases of mortgages and government debt. This will likely result in higher long-term rates.

Credit markets, though, didn't care, and carried on with their bull market run. Crude oil fell 4.8% to $68.33, its largest percentage loss since July on a surprise increase in inventories.

Thursday: Some momentum was lost in the housing market after weak existing homes sales numbers put an end for four straight months of gains. Sales last month came in at a million seasonality adjusted annual rate of 5.1 million -- a 2.7% drop from July. We continue to see an emphasis on foreclosures with distressed sales making up 31% of total sales. The highlight: Supply of homes fell to just 8.5 months of sales, a level that is believed to reflect a balanced market. There are, however, the issues surrounding a "shadow" inventory of homes waiting for foreclosure proceedings to complete or the slightest whiff of a recovery before being listed.

Friday: The G20 wrapped up its meeting in Pittsburgh with a commitment to tighter regulation of the financial system and system to subject each country's economic policy to a type of peer review to try to avoid the types of global imbalances -- China's export obsession and America's credit binge -- don't happen in the future. While the latter can only be enforced by a public shaming by other countries and the International Monetary Fund, it lacks an actual penalty. But it's a good first step.

Consumer sentiment, as measured by the University of Michigan, improved to its highest level since early 2008 after rising by nearly one-third since late last year. According to Haver Analytics, over the last 10 years there has been a 69% correlation between sentiment and growth in consumer spending.
Unfortunately, the good news didn't extend to durable goods orders in August: There was an unexpected decline that reversed half of July's 4.8% gain. A drop in orders for transportation equipment was fingered as the main culprit. However, this metric is quite volatility and the overall trend still points towards a rebound in the manufacturing sector.

Monday: A quiet calendar with no economic releases.

Tuesday: The latest on nationwide home prices courtesy of the excellent Case-Shiller Home Price Index. Also, we get another update on consumer confidence.

Wednesday: The government makes its final revisions to second-quarter GDP. The last revision made no change to the initial estimate of a 1% decline. In the first quarter, GDP plummeted 6.4%. Traders will be looking for indications that inventories have dropped and demand is increasing ahead of a projected inventory rebuild in the months ahead. We will also get an update on the health of the manufacturing base in the latest ISM - Chicago Business Barometer.

Wednesday will also mark the end of the third quarter.

Thursday: A busy day with an update on auto sales, personal income and spending, the latest ISM Manufacturing Index, and construction spending.

Friday: The September jobs report is expected to show a loss of 170,000 jobs compared to the 216,000 that were lost in August and a 463,000 decline in June. The unemployment rate, currently at 9.7%, will move closer to 10%. Also, we get an update on factory orders.
In summary, the start of the fourth quarter is on the horizon. We expect it to be a plus for investors, though not without growth and geopolitical scares that create S-turns and potholes. Stay positive amid the turbulence as long as corporate credit markets remain strong and the primary trend is up.

[Editor’s Note:New Money Morning contributor Jon Markman is a veteran portfolio manager, commentator and author. Anthony Mirhaydari was the research assistant on this column. Markman currently serves as the editor of two investment-research services, Strategic Advantage and Trader’s Advantage. For information on obtaining a two-week free trial to the daily commentary of the Strategic Advantage, please click here.]

Nice article and thank you for publishing a synopsis on the upcoming week's major annnouncement regarding economic activity.

Thank you very much for the top chart $(INDU) Dow Jones Industrial Average INDX and your succinct analyses using the blue highlights. It is a classic chart indicating trends showing the market rising, peaking, declining and rising again.

I am not a chartist, but from what little I know on reading charts, I can form my own observations on what will happen during the most critical period when stocks peak. During the period April 2008 to end of 2008 (flat blue dotted line), is that what chartists call a "head and shoulders pattern" when the second shoulder peak is lower than the first shoulder? It was a bad sign indicating an impending crash. We all know what happened: the stock market tanked big time to a low in March 2009. Your chart tells me if you see this pattern head for the hills and reduce your stock positions.

The market bottomed and the Dow has been shooting up since March 2009 (blue dotted line). The steep trend line shows the market is in an upward trend. I would expect the upward trend to continue unabated. The chart tells me to increase my stock position and buy in selected markets which you also explained in Chart 2.

I am more impressed with the top chart. Thanks again and for your succinct analysis. I am going to keep it in my files for future reference and use. This model chart could be used also for timing your buying and selling in individual stocks and sectors.

I found this format of recapping the prior weeks financial calender and providing the upcoming weeks calender very useful. Perhaps this could become a norm. Maybe have it released each weekend. this would be quite helpful.
Eric Soholt
Riverside,Ca.

Here's Why the U.S. Rebound Will Be Stronger Than You Think