This is as good a time as any to step back and look at the U.S. stock market over the last 15 years. As followers of my work well know, I like looking at the so-called Keltner Channels to understand the market’s long-term trend.

Invented by commodity trader Chester Keltner in 1960, based on work done by pioneering technical analysts in the 1930s, the Keltner channel is a moving-average band where the upper and lower boundaries adapt to changes in volatility. It gives some good Buy/Sell and Overbought/Oversold guidance for securities, commodities or indexes that trend well, as the major market indexes tend to do.

As you can see in the chart that follows – using monthly bars – the U.S. Standard & Poor’s 500 Index rose to the top of its Keltner channel in both 1995 and 2004 near the beginning of big multi-year moves – and continued to hug that top line all the way up.

The 1995-2000 move was so intense that the index spent most of its time above the channel. The 2003-2007 advance was not as intense, so the index rose only to the top line. All dips to the middle of the channel were buying opportunities until they weren't. 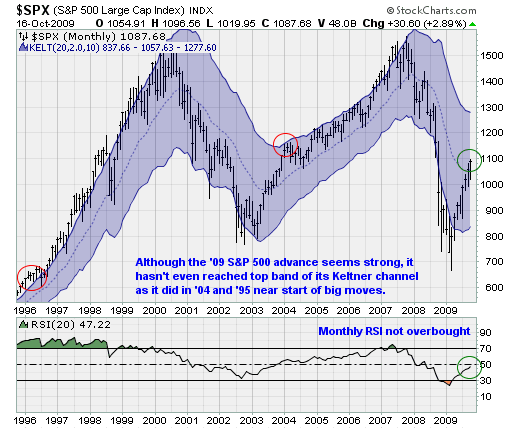 If we now fast-forward to the present, you can see that on a monthly basis the big-cap U.S. index has only just reached the middle of its Keltner channel. With daily and weekly bars, this has proven to be a spot where stocks and indexes pause. If they fail, they fail here. But generally speaking, once they have a good head of steam they will keep right on rolling to the top of the channel.

We will know soon enough if this is a pause or the end of the line. But given strong breadth in the current market, plus a lack of significant selling pressure, my expectation is that the major indexes will continue on their way to the top of the channel over the next few months. I will keep monitoring the progress every week and month, however, without any preconceived notions.

Stocks stumbled on Friday, recovering somewhat in the early afternoon before the bears reasserted themselves in the closing minutes of trading. This ended a string of three consecutive up days on disappointing sales from General Electric Co. (NYSE: GE), a worse-than-expected loss at Bank of America (NYSE: BAC), and a slip in consumer confidence. Developing nations saw similar weakness, ending a nine-day rally that was the longest in four years.

Total volume increased slightly as 1.4 billion shares traded on the New York Stock Exchange (NYSE: NYX). Declining issues outpaced advancers by almost 2 to 1, but down volume was much heavier at 76% of total volume. Lowry Research Corp., reports a four-point decrease in buying power along with a three-point increase in selling pressure.

Keep in mind it was an options expiration Friday, which means that there was more than the usual amount of gamesmanship. Options expiration week involves a lot of complex crosscurrents, as the brokerages try to make sure that as many calls and puts finish out of the money as possible.
So it's usually not wise to base any long-term investment decision making on what happens in these weeks. It's sort of like Las Vegas: What happens in expiration week says in expiration week. We'll get a better view of any change in emerging trends next week.
Let’s take a look at the individual events of last week.

Monday: Trading was light on account of the Columbus Day holiday.

Tuesday: Bank stocks were hit in the wake of a surprise downgrade of Goldman Sachs Group Inc. (NYSE: GS) by ace analyst Meredith Whitney on valuation concerns. Over the long term, she's still bullish. Just as an aside, let's keep in mind that although Whitney did a great job of keeping people out of bank stocks in the bear market last year, she had a sell or neutral on all banks except for Goldman during theater 145% ascent over the past seven months.

Wednesday: Retails sales declined less than expected in September as the consumer retrenched in the wake of the cash-for-clunkers auto rebate program. Sales fell 1.5% compared to the consensus estimate for a decline of 2.1%. As expected, auto sales plunged 10.4% after a 7.8% jump in August. Also, businesses continue to burn through inventories as the inventories-to-sales ratio nears more normal levels -- indicating a much anticipated inventory rebuild, and associated increase in factory output, could soon begin.

Thursday: Inflation remains subdued as the core Consumer Price Index increased 1.5% year-over-year. This gives central banks plenty of leeway in keeping policy rates at ultra-low levels. A number of manufacturing reports, including the Empire State and the Philadelphia Fed surveys, point to continued healing in the manufacturing sector. And finally, weekly jobless claims declined to 514,000, down 7,000 from the previous week and falling to the lowest levels since late last year.

Friday: The factory capacity utilization rate increased from 69.6% to 70.5%  – the third monthly increase -- as production lines are restarted to meet new order demand. Motor vehicles are a big contributor as dealer inventories were depleted by cash-for-clunkers over the summer and are now being restocked. The University of Michigan's consumer sentiment index for October declined from to 69.4 from 73.5 in the previous month. Analysts were expecting a reading of 74. The expectations sub-index posted a hefty six-point decline as ongoing worries about the job market weighs on consumers.

Tuesday: Housing starts are reported. We also get an update on inflation courtesy of the latest Producer Price Index.

Thursday: Weekly jobless claims are reported. The Conference Board will release its latest figures for its index of leading economic indicators.

In conclusion, stocks may pause for a week or two to digest recent gains, but it looks to me as if the fourth-quarter beta chase will continue after that spell. Large caps seem to be coming into their won, led by the once-lagging energy group. It may be time to deemphasize tech and banks in portfolios and boost the level of energy.

[Editor's Note: New Money Morning contributor Jon Markman is a veteran portfolio manager, commentator and author. He is currently the editor of two investment-research services, Strategic Advantage and Trader's Advantage. For information on obtaining a two-week free trial to the daily commentary of the Strategic Advantage, please click here. Anthony Mirhaydari was the research assistant on this column.]