Money Morning Contributing Writer Jon D. Markman has been saying it every week now: The bulls have it! Between the New York Stock Exchange continuously reaching new highs, the Dow Jones Industrial Average rising up along its eight-day average (see chart), and a rebounding retail sector, there's reason to celebrate what appears to be a market recovery offering investors a profit. 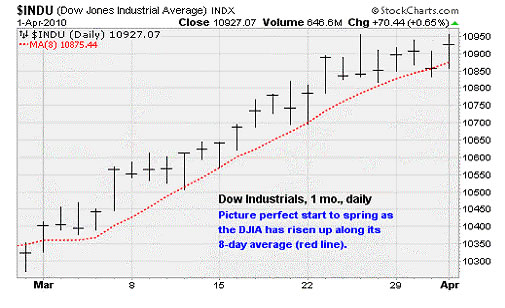 "You can't bury your head in the sand and ignore what's happening," said Money Morning Chief Investment Strategist Keith Fitz-Gerald. "If you did that, you've missed a 60%-plus rally in the [Standard & Poor's 500 Index] since early last March. You cannot fail to acknowledge what's happening" in the markets, even though top traders understand that cheap money from the government bailout - and not a well-rounded economic recovery - is mostly likely behind the torrid run-up in U.S. share prices.

The U.S. stock market has staged one of its most powerful rallies in history, zooming nearly 70% in the 12 months that followed the March 9, 2009 market low. U.S. stocks soared another 5% during the first three months of 2010 - its best first quarter in a dozen years. But where do we go from here?

That brings us to next week's Money Morning Question of the Week: Is this a true bull market? A year from now, are U.S. stocks - as measured by the Standard & Poor's 500 Index - trading higher, lower, or at the same level as they are today?

Send your answers to us at mailbag@moneymappress.com. We want to hear from you!

[Editor's Note: Is there a topic you want to see covered as a "Question of the Week" feature? Then let us know by e-mailing Money Morning at mailbag@moneymappress.com. Make sure to reference "question of the week suggestion" in the subject line. We reserve the right to edit responses for length, grammar and clarity.

Thanks to everyone who took the time to participate - via e-mail or by posting their comments directly on the Money Morning Web site.]