U.S. stocks were back up to their old tricks last week, as volatility waned and financial, industrial and retail stocks waxed. It was a week in which risk was in fashion – until Friday, when the U.S. Securities and Exchange Commission (SEC) hammered Goldman Sachs Group Inc. (NYSE: GS) with fraud charges related to the subprime-mortgage crisis. With that, playing defense was considered offensive.

Leading the way forward were companies that are the ultimate in beta and hopefulness – such as beaten-down bond insurer Ambac Financial Group Inc. (NYSE: ABK), which rose 60%, beaten-down car parts maker American Axle & Manufacturing Holdings Inc. (NYSE: AXL), up 10%, beaten-up retailer Tuesday Morning Corp. (Nasdaq: TUES), up 24%; and beaten shoemaker Crocs (Nasdaq: CROX), up 20%. We're not talking, here, about investors who last year bought the shares of companies that were left for dead; these stocks might actually be worth something in an economic turnaround.

There's been a lot of concern about the decline in volatility, as many analysts say it shows that investors are becoming too complacent. Is this really a concern?

As we'll see, my expectation is that we'll see a correction in the weeks to come – but one that paves the way for U.S. stocks to rebound and then zoom to higher highs.

To be sure, the volatility is really dropping. Since mid-February, just three of the 37 trading days have featured a change in the Dow Jones Industrial Average of 100 points or more. Compare that to the 13 100-point days from mid-January to mid-February. 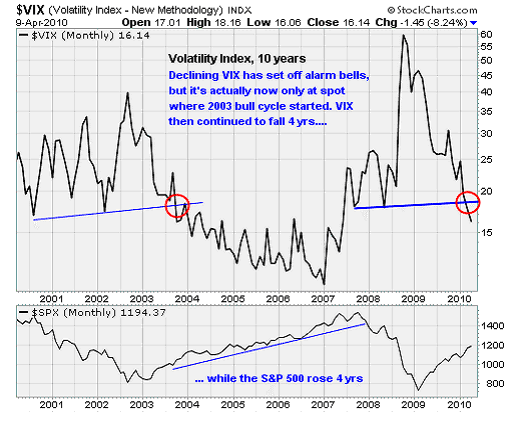 The question is whether it's actually a negative. The chart above offers clues. The last time that the CBOE Volatility Index (VIX) broke under a multiyear line of bottoms was mid-2003 following the 2000-2002 bear market, as shown in the first red circle. The VIX then proceeded to fall for four more years – and all the while the Standard & Poor's 500 Index rose.

Now the VIX has broken a multiyear-bottoms line again, as shown at the second red circle; that's why we're hearing screams of complacency, yet again. But if you look closely at the chart, you can see that the VIX now is only at the place where it began the last four-year bull cycle – and has much, much farther to fall to equal its lows of the last cycle, even after the spike higher on Friday.

My conclusion is that investors feel as if they are already in a period of extra-low volatility mostly because they are only one year removed from a period of extremely high and prolonged volatility. As the bull cycle rolls on, bouts of volatility will become more and more muted. We will almost certainly see periods in the next nine months when the VIX rebounds into the low 20s, but it's most likely on its way to 10.

This is normal bull cycle behavior; don't sweat it.

Susan Berge, a veteran institutional analyst, made an interesting comment about the strange quality of the recent action in a weekend research note to clients. She's been bullish since early last year, but has been puzzled by the scarcity of pullbacks that allow buyers to rest and reload.

Said Berge: "I don't think I have ever seen a more frustrating market. I remember that 1976 was a pretty boring year, when the market was stuck in a 5%-10% trading range for eight months. But at least then we had several minor pullbacks and short-term corrections to break up the monotony. The market didn't get very far on the upside, nor did it experience an intermediate-term correction, but there were pullbacks that lasted more than a day or two. I have reviewed the daily action of the DJIA back to 1958, and I've never seen a period similar to the market's action since early February of this year. Clearly, something unusual is happening." 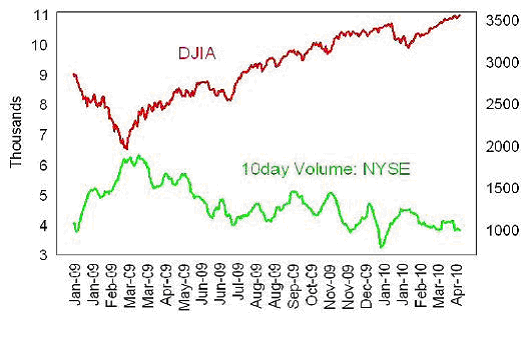 Further puzzling Berge, and many other analysts who focus on price action rather than fundamentals, is the astonishing lack of volume on the recent advance to Dow 11,000. Berge produced the chart above, which vividly shows the extent to which volume is not confirming price.
In a perfect world, as most of you know, volume should gradually expand as stock prices rise. When prices make a series of higher highs unconfirmed by an expansion in trading volume, it suggests the uptrend has run out of steam, and a trend reversal typically ensues.

In this case, the peak in New York Stock Exchange volume occurred right around the March 2009 lows. The market then embarked on a 70% advance, but with an absence of the explosive increase in trading volume that we have come to expect in observing 100 years of market data.
Is it bad? It's hard to say. It hasn't been bad, at least so far. It may even be good – if it turns out that that the missing volume has been lurking in money market funds and bonds until now, and has been waiting for confirmation that the coast is clear to re-emerge.

My guess: There will finally be a 3% to 5% correction in coming weeks that will halt around the 1,160 level of the S&P 500. If and when that correction arrives and stocks stabilize, then the missing volume might finally show up and we can get a vigorous summer rally toward the 1,300 level.

Monday: The U.S. government continues to dig itself into a hole. The U.S. Treasury Department reported that the budget deficit totaled $65.4 billion in March – more than the $62 billion consensus estimate. This isn't chump change, to be sure, but it is a big improvement on the whopping $192 billion deficit posted this time last year.

Tuesday: The U.S. trade balance moved a bit further into deficit territory in February as newly invigorated consumers demanded $1.1 billion more in goods from overseas. While a higher trade deficit isn't good (it weighs on gross-domestic-product (GDP) growth) any sign of consumer health is fantastic. Intel Corp. (Nasdaq: INTC) reported better-than-expected results with earnings per share of 43 cents, compared to the 38 cent estimate on a whopping 44% increase in revenue.

Wednesday: Another consumer data point: March retail sales increased 1.6%, outpacing the consensus estimate for a 1.2% rise. This was also well ahead of the February result of 0.3%. Finally, after a long period lost in the wilderness of unemployment and falling wealth, the American shopper is coming back, baby! Auto sales were the largest contributor to growth, rising 6.7%. JP Morgan Chase & Co. (NYSE: JPM) reported earnings of 74 cents per share, beating the estimate of 64 cents per share on a 4.6% increase in revenue.

Thursday: A mixed bag today. Initial weekly jobless claims made a surprise jump to 484,000, above the consensus estimate of 440k and over the period week's result of 460k. The government claims the increase is due to administrative factors surrounding the Easter holiday. We'll see. Also on the weak side, March industrial production came in with a lower-than-expected 0.1% increase. Analysts were expecting a 0.8% increase. Google Inc. (Nasdaq: GOOG) reported earnings per share of $6.76, ahead of the $6.60 analysts were expecting on a 2.2% increase in revenue.

On the positive front, the Empire State Manufacturing Survey jumped to 31.9 from 22.9 previously. This was also well ahead of the consensus estimate. This survey reflects the business activity of manufacturers in the state of New York. Also, the Housing Market Index, which is complied based on the sentiment of homebuilders, made a big jump to 19 from 15 in March.

Friday: In a day dominated by the SEC's suit against Goldman Sachs, there was still some economic news. Housing started increased a bit more than expected in March – with permits for construction showing even more improvement. Consumer sentiment made a surprising drop, pointing to ongoing woes in the labor market. The index fell to 69.5 from 73.6 in March. This was also well under the consensus estimate of 75. Bank of America Corp. (NYSE: BAC) reported earnings of 28 cents per share, above the 9 cents analysts were expecting, but revenue dropped by 10.6%.

Monday: The Conference Board will release its latest index of leading economic indicators. After rising 0.1% in February, analysts expect the index to increase 1.1% for March. Citigroup Inc. (NYSE: C) report results before the bell while International Business Machines Corp. (NYSE: IBM) reports after the close.

[Editor's Note: As this market analysis demonstrates, Money Morning Contributing Writer Jon D. Markman has a unique view of both the world economy and the global financial markets. With uncertainty the watchword and volatility the norm in today's markets, low-risk/high-profit investments will be tougher than ever to find.

3943 Reads
The Best Penny Stocks to Own Right Now – 185% Profit Potential
The best penny stocks to own are the highest reward for the lowest risk. And there are preferably a lot of insiders buying up shares in good faith. Then I can trust the high analyst projections - like the 185% growth target on our top penny stock today.