Stocks flipped out late Friday morning following an announcement of Greece's decision to seek help from the European Union and International Monetary Fund. But by the end of the session, cooler heads began to prevail and the major indexes ended well into the black, continuing the bull run.

Overseas large-caps ended the week flat, though China sank another 1%. Our own top choice overseas fared better, as Market Vectors Indonesia Index (NYSE: IDX) closed the week up 4%.  Another star off the week overseas was iShares MSCI Turkey Index Fund (NYSE: TUR), up 3%. 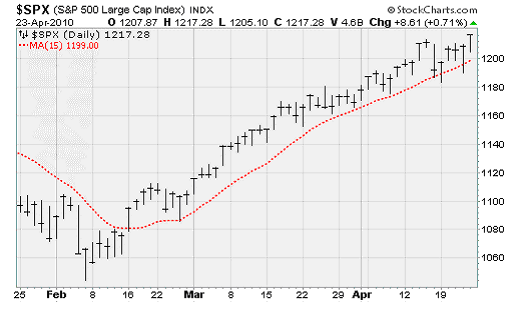 The number I want you to watch now is 15, as in the 15-day average of the S&P 500 Index. It has provided support repeatedly for the benchmark index during the fantastic bull run since February 16 as well as in December and early January. The 15-day average has been the spot where bulls have bought the market on declines.

The chart tells us that as long as the 15-day average provides support, then the current advance is still in gear. If and when it gives way again on a weekly basis, then we will know it is time to take some profits, grit our teeth, accept the setback for awhile, and prepare to buy again with any reserve cash or money held in bond funds for the next leg higher.

Bottom line: I would hesitate to make too much of past week's volatility. The government's civil fraud charges against Goldman Sachs Group, Inc. (NYSE: GS) may indicate a more active regulatory environment, but I doubt that it wants to derail the economy by undermining the linchpin of global finance. Yet sometimes in the short-term the government works at cross-purposes to its long-term interests, so the market is about to have a lot more texture very quickly. This means it will still go where it's headed, but there will be a lot more ups and downs en route. Don't get shaken out of your positions. 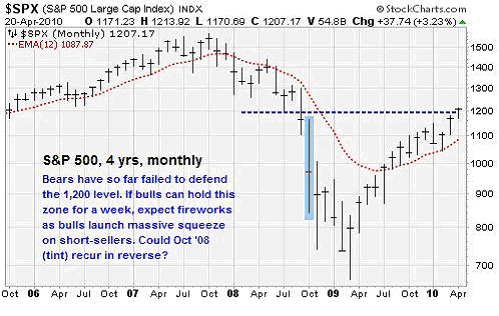 The big news technically this week was that the S&P 500 rose back above the critical 1,200 line to close at 1,207. A couple more days above that level, and a whole lot of equity and credit short-sellers are going to throw in the towel. I know I've said this before, but I'll say it again just for effect:: If short-sellers decide the jig is up, and decamp with the intention of regrouping someplace higher up the road, the next whooshing sound you hear will be a giant vacuum sucking stocks up to 1,300.

Leading the way is Apple Inc. (Nasdaq: AAPL), one of our top StrataGem picks for this month, which reported earnings that blew away the consensus estimates like a freight train running over a child's toy.

The company said its profit rose to $3.07 billion, or $3.33 a share, compared with $1.62 billion, or $1.79 a share for the same span last year. Revenue climbed a stunning 49% to $13.5 billion, and the company reported that it sold 8.75 million iPhones in the January-March period - about 1.75 million more than analysts expected. Mac computers and iPod music devices also surprised with big upside.

It's a little hard to believe, but if Apple were to surprise in the coming fiscal year as it has over the past year, it will earn $19.02 a share in 2011. If that's true, then Apple is trading for a minuscule 12x forward earnings. Back out its $25 per share in cash, and it's trading at 11.5x. That's very, very low. It's so low that either something terrible is about to happen to Apple, or just about every investment manager regardless of their "style box" will find it reasonable to buy the shares. It's a value play, it's a growth play, it's a momentum play. It's everything except a commodity play, so I guess we can leave out the gold bugs.

In a more fully excited environment, you could count on Apple to trade with at least a 20x multiple, which means that the price next year should be at least $380, or 55% higher than the current quote. Long way to go, but at least you know where the compass is pointing.

There is no end of reasons to think that the bull cycle may be in jeopardy, to be sure. A witch hunt against investment banks could be a game-changer, for instance. Then of course there are those simmering government debt troubles in Europe. And housing hasn't found a solid bottom yet. The list goes on.

For more on this, I turn to Credit Suisse Group strategist Andrew Garthwaite. In a voluminous research note to clients this week, Garthwaite listed a number of reasons why his team recommends continued overweight exposure to equities and the avoidance of relatively overpriced corporate bonds. Let's explore each in turn.

First, the economic growth/inflation profile continues to improve. The CS team expects global gross domestic product (GDP) to clock in at 4.5% this year - a big improvement from the -0.8% suffered last year.

The analysts give four reasons: a) Companies are under-invested, with free cash flow as a percentage of the economy at all time highs, leaving plenty of firepower for new hiring and new capital expenditures; b) the U.S. labor market is recovering strongly with temporary employment way up and job cuts way down; c) worries over China look overdone with inflationary pressure moderate and monetary policy still accommodative; and d) only 32% of the U.S. stimulus has been spent. 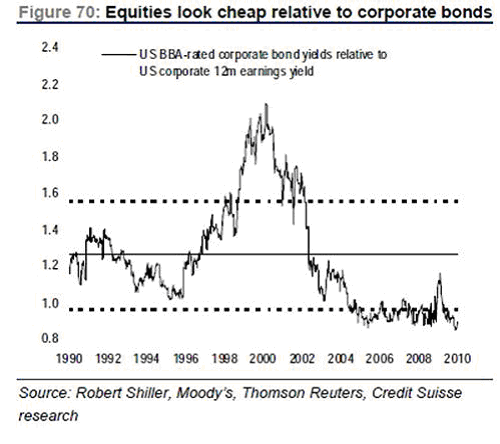 Second, equities offer superior value compared to other asset classes. Check out the chart above, which shows bond yields compared to corporate earnings yields on stocks. Clearly, stocks are due for another late 1990s-style outperformance relative to bonds.

Another way to view this is through the equity risk premium, which represents the added return you are expected to receive over U.S. Treasury yields in exchange for holding stocks (which are riskier). The equity risk premium currently stands at 5% - above long-term averages. This means that pricing models suggest you receive higher-than-normal returns for holding stocks vs. bonds. Also, equities provide a hedge against the two most threatening risks right now: inflation and government debt defaults. Bonds don't.

And finally, major institutional buyers are still underweight equities - which represents a significant source of untapped demand for stocks. Currently, only 45% of mutual fund assets are invested in equities. Compare this to the 15-year average of 51%. Meanwhile, bond mutual fund assets account for 21% of total mutual fund assets. This is the highest level since 1996. 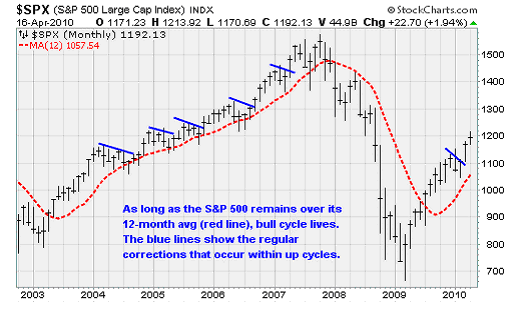 This analysis, in addition to my own study of medium-term measures of market direction, leads me to believe the best strategy over the coming weeks will be to come in as a buyer on any oversold condition that emerges.

Tuesday: Store sales continue to improve based on the tally compiled by the International Council of Shopping Centers and Goldman Sachs. The tally rose 4.6% for the week of April 17 compared to last year - the second strongest weekly gain of the recovery thus far. The Coca-Cola Company (NYSE: KO), Goldman Sachs and Yahoo! Inc. (Nasdaq: YHOO) all reported better-than-expected results.

Thursday: Producer price inflation made a surprise increase in March as colder-than-normal weather and an increase in gasoline prices pushed up input prices. Prices increase 0.7% for the month, up from a 0.6% decline in February. Separately, initial weekly jobless claims remained troublingly high at 456k. Claims have yet to fall below the 450k level for any significant amount of time - a sign that the labor market is still quite soft. Microsoft Corp. (Nasdaq: MSFT) and American Express Co. (NYSE: AXP) both reported better-than-expected results.

Friday: Durable goods orders fell 1.3% in March - a weaker-than-expected result. A decline in aircraft orders, which are lumpy by nature, pulled down the result. Excluding the 99.5% monthly decline in civilian aircraft orders, the overall index would have increased by an impressive 2.8%. Also, new home sales surged as buyers scramble to close deals ahead of the end-of-month expiration of the second round of homebuyer tax credits.

Wednesday: The Federal Reserve announces its interest rate decision. Rates are expected to remain unchanged, but Wall Street is eager to see if the Fed's policymakers modify the "extended period" language in a clue to when the near-zero interest rate stance will change. The Dow Chemical Company (NYSE: DOW) is among the companies reporting results.

Friday: The initial estimate of Q1 GDP growth will be reported. Analysts expect the third-consecutive quarter of growth with a 3.4% expansion -- down from the 5.6% GDP jump in Q1 but still respectable.  Chevron Corp. (NYSE: CVX) will report results.

thanks for your interesting mail and your analogy of the markets ,that happen around the globe

look forward to your newsletter

Thanks for great articles.

Sell in May - But Don't Go Away From the U.S. Stock Market

[…] Money Morning Week Ahead Column: Stocks – Led by Apple Inc. – On a Hot Bull Run No Investor Should Miss […]