Most textbook economists say that the U.S. economy is engaged in a broad-based recovery.  But while there's a consensus that there's no "double-dip" recession on the horizon, the evidence suggests the nation's economy is headed for a slowdown in the second half of 2010.

The reason: In a market that derives 70% of its growth from consumer spending, the last half of this year will be all about those consumers - and about the economy's inability to generate enough jobs to keep the nation's cash registers ringing.

And that uncertainty will continue to stifle hiring and will result in another round of consumer belt-tightening - and a continued economic malaise.

Economists are forecasting stronger growth - 3.8% on an annualized basis - in the second quarter, which ends Wednesday. But big questions remain about prospects for the second half of the year.

When the U.S. economy is at its strongest, consumer spending accounts for as much as 70% of the nation's growth. So there's little chance for the economy to get up off the mat until shoppers open their wallets and loosen their purse strings. In fact, because consumer spending is such a potent economic catalyst, it acts as a leading indicator of growth - similar to the manufacturing and purchasing indexes. The chart below shows how changes in consumer spending patterns often presage changes in economic growth patterns. 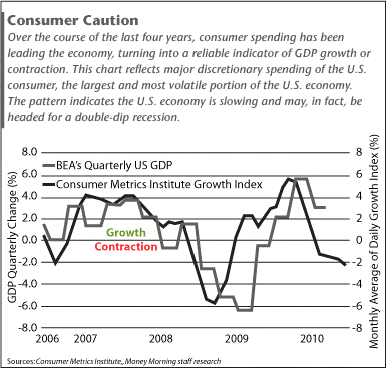 Right now, consumer spending is trending down, which means we're likely headed for an economic slowdown - at the very least.

So economic growth needs to be a lot stronger - two or three times the current pace - to make a big dent in the nation's 9.9% unemployment rate.

Claims at a level of roughly 450,000 are consistent with private companies adding about 100,000 jobs a month, JPMorgan Chase & Co. (NYSE: JPM) chief economist Bruce Kasman said in a note to clients. That is fewer than the 116,000 a month average growth in the five years to December 2007, when the recession began.

In fact, the housing-market bubble was directly responsible for the economic expansion of the early part of the decade - when loose lending overextended credit for questionable home loans. Homeowners used their houses as virtual ATM machines, cashing in their home-equity lines to buy cars, furniture, clothes, swimming pools and expensive vacations, such as cruises.

Simply put, the country has too many houses and too many homeowners in trouble.
Consider:

The serious delinquency rate - the percentage of loans that are 90 days or more past due or in the process of foreclosure - was 9.54%. The cure rate for these loans is less than 1%.

No wonder the banks aren't that eager to lend money...

[…] reported 1.4% decline for that month. Despite previous signs of improvement in economic conditions, some indicators now point to a possible slow-down in the second half of this year as consumers spend less and unemployment remains at 9.5%. GDP grew at an annualized rate of 2.4% in […]