While earnings reports continue to pour out each day, investors should be careful before being excitedly swayed by strong financials - there is much more of the big picture to consider.

Stocks failed to get traction in the middle of last week after Alcoa (NYSE: AA) and Intel (Nasdaq: INTC) earnings reports underwhelmed investors, and Friday they spun off the road. The culprit: Fears that recent earnings gains represented a peak, and that weak readings on the economy were more representative of current conditions.

Retail sales disappointed and the Federal Reserve cut its 2010 growth forecast. Even word that Singapore grew at a record pace of 19.3% in the second quarter couldn't lift the air of despondency on Wall Street.

The big-cap and small-cap indexes alike flipped over into the red after running headlong into their 50- and 200-day averages and Fibonacci retracement zones. The Standard & Poor's 500 Index has now formed a new head-and-shoulders (H&S) top again not more than two weeks after a previous one was invalidated. 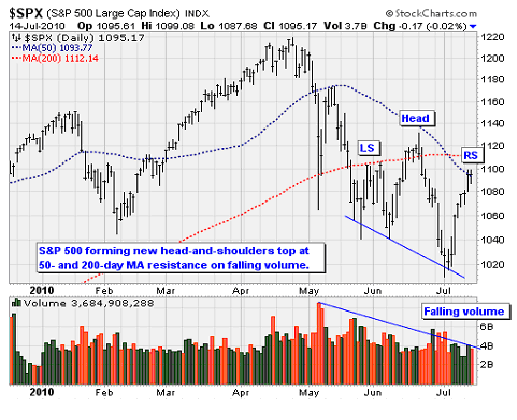 Head-and-shoulders tops are rally killers, and are much more than just a pattern of squiggles described by technical analysts who try to anthropomorphize price charts.

H&S tops trace out the psychological reaction of the herd of investors to waves of stimuli from unevenly distributed news events. They form when there is enthusiasm on the left shoulder, followed by sadness to set a left neckline, followed by a reborn euphoria to create the head, then renewed sadness that creates a new lower point for the neckline, then a new euphoria that doesn't surpass the most recent one to create the right shoulder, and then ultimately a final bout of sadness that creates the final stroke of the pattern back down to a lower neckline. All the while in this stretch of stock distribution, daily volume needs to be declining.

In my experience, the best place to short a market or index is when it appears ready to set a right shoulder on declining volume. Once other people see the same pattern, they will jump in and do the work for you. And that is what happened Thursday and Friday.

Many technical traders get offsides when they wait for a head-and-shoulders pattern to complete, and then try to short a decline under the neckline. That's what we call "shorting into the hole," and it is hazardous. Anyone can see that, and as the old saying goes, whatever everyone knows isn't worth knowing. 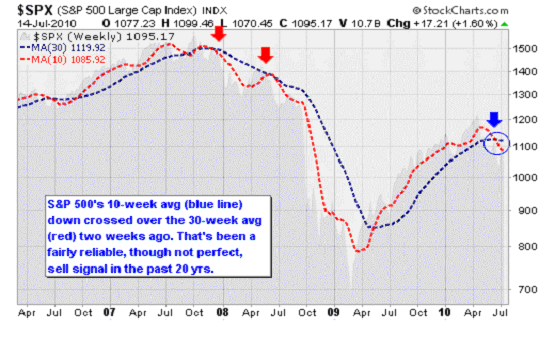 My point is that when a right shoulder is forming at a logical location -- in this case, resistance from the 50-day average, and a 50% Fibonacci retracement of the April-June slump -- then it is time to be aware that bears could emerge with firepower here to defend their downtrend. As you can see in the chart above, we are still in bears' territory after all, with the 10-week average under the 30-week average.

It's up to bulls now to prove that they have the ammo -- earnings surprises, new government programs, a shiny, positive new data point -- to get prices rolling higher again. The bottom line is: Be on your toes. Don't get lulled into thinking that seemingly upbeat earnings reports from Alcoa and Intel miraculously jolted the market back into a bull cycle. Those were backward looking reports, and investors don't believe they provide a good glimpse of a future most likely characterized by shrinking sales, shrinking margins and lower earnings.

Risk on the Barbie

Risk assets in general had a tough week as traders flocked to safe havens. Commodities moved lower, the Chicago Board Options Exchange Volatility Index (VIX) climbed, crude oil dropped, foreign stocks lost ground, and the euro fell. The dollar climbed from its lowest level since mid-May. The VIX rose after bouncing on its 200-day moving average, which is another big red flag for the broad market. And Treasury bonds posted their best gain since last Tuesday, not long after they looked like goners.

The situation still has the potential to darken in short order. Just look at the way earnings sweethearts Alcoa and Intel have been left at the altar by investors over the last two days. Intel was up as much as 7% in overnight trading after reporting earnings, but finished that day with a gain of just 1.8% and closed Friday with a 2.3% loss.  Alcoa slumped 4% Friday and fell every session after its earnings report temporarily wowed the crowd. 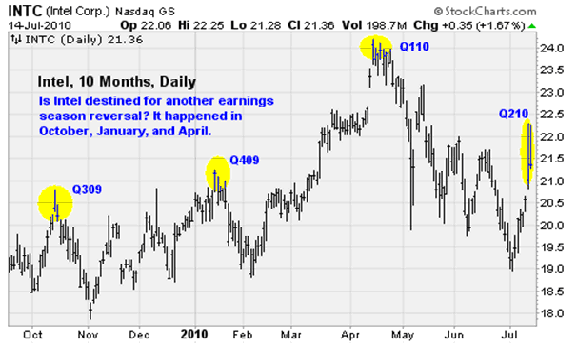 The price action in the two stocks looks very similar to what happened during Q3 2009 earnings season last October, not to mention Q4 2009 and Q1 2010. Both companies reported solid results. Both were initially pushed higher. But both eventually formed big fat reversal patterns and plunged in all three cases. Maybe one day the gap buyers will learn.

The bottom line on this subject is not to get overly excited about earnings. They are highly manipulated numbers, and are virtually always accompanied by positive comments from the salesmen stationed in the chief executive's suite. Traders who really know what's going on lay in wait for these moments, and in the past at least have pounced. 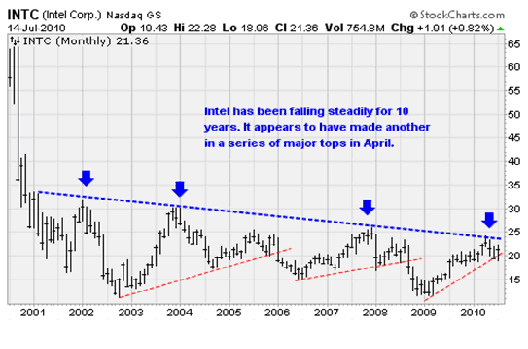 Intel and Alcoa are at least neutral in my model if not outright short-sells. They had their chance, and they blew it. The risk trades are cooked.

Strong Earnings Not Here To Stay

Earnings growth forecasts will have to fall heading into 2011 and beyond as the economy downshifts from its torrid recovery pace to its slower secular growth rate. Worst-case, earnings will have to discount a recession in Europe and the softening could spread like a virus to infect other parts of the globe. Analysts at UBS (NYSE: UBS) just cut their 2011 S&P 500 earnings per share forecast to $91, which is 6% below the consensus estimate.

The analysts asked themselves: Where are analysts most wrong? The two sectors the UBS team believes are most vulnerable to earnings downgrades are energy and materials due to their exposure to Europe. Both were by far the weakest sectors during the 1998 "Asian contagion" financial crisis.

Consumer discretionary -- retailers and their suppliers -- are also vulnerable. Stocks in the sector benefited earlier this year from a decline in the fear that U.S. families would save more and spend less under pressure from stagnant wages. Yet there's been help from an unexpected quarter: Lower interest rates have reduced families' loan servicing costs -- a deleveraging without the pain.

Still, if job growth remains as anemic as it was the past two months, UBS analysts believe that retailers' estimates will need to be cut.

And finally, the financials are expected to suffer near term due to the weak performance of the stock market in the second quarter. This reduces commission revenues, merger deal activity, and asset management fees. Plus the government is increasing the cost of regulatory compliance.

Now let's take a quick look at a Goldman Sachs (NYSE: GS) prop-desk analysis of the probability of another recession. This is not the official GS analysis, but rather the view of traders who do their own research rather than just accepting what the brokerages' economics team hands out.

Most recession probability models use the shape of the yield curve -- a line that represents short-term, medium-term, and long-term interest rates on U.S. Treasury bonds -- as a major input. And most of the time, it's a valuable indicator. When rates are higher in the future than they are today, it's considered to point to higher growth for the economy down the road.

With this in mind, our GS prop-desk analysts left out the yield curve variable in their latest recession probability calculations. The outcome: Their model still only forecast an 8.6% probability that the economy will tip back into recession six months from now.

Recent economic data points suggest the economy's growth rate is slowing, though. The ISM Manufacturing and Non-Manufacturing Indices have pulled back. The economy lost jobs in June. The U.S. government's fiscal posture is transitioning from an economic stimulant to a depressant as spending is cut and taxes raised. And all those temporary Census workers are out of work.

As the next part of their analysis, the GS analysts decided to see how the economy would look if they used a different measure of employment than the typical payroll growth figure. Instead, they fed the worsening employment-to-population ratio into their recession model.

The result this time was more serious: A 25% probability that the economy will tip back into recession six months from now. For now, stocks seem to be headed higher. But the risk to the economy from joblessness is something we need to be mindful of in the weeks to come.

Thursday: The Empire State Manufacturing Survey came in well under expectations at 5.1 versus 18 and the prior period result of 19.6. Growth in new orders is tanking, falling to 10 from 17.5 -- a worrisome sign that the rebound in the manufacturing sector could be slowing. The good news was that initial weekly jobless claims dropped out of the range that has prevailed since October. But analysts at Deutsche Bank AG (NYSE: DB) note that the improvement could be due to seasonal factors and not indicative of labor market strength.

Google (Nasdaq: GOOG) was the first major corporation to miss earnings expectations while JPMorgan Chase (NYSE: JPM) beat its estimates thanks to a reduction in loan loss provisions.

Friday: The University of Michigan's Consumer Sentiment Index dropped to 66.5 -- down from 76 the previous month and well under the consensus estimate of 75. Bank of America (NYSE: BAC), Citigroup (NYSE: C), and General Electric (NYSE: GE) all reported better-than-expected earnings. Revenues contracted for all three companies on a year-over-year basis, however.

yes, it looks fine with the analyzes but I'm cautious after having learned about market manipulations with Plunge Protection Team

what if i invest in pakistan kse .is it safe somewhat

Earmings can be manipulated very easy. I focus on main economic numbers, like unemployment and housing, which is terrible. Our current administration is also doing a very terrible job, and will likely make things even worse.