Despite positive earnings reports last week from more than a few bellwether companies, stocks remain stuck in a trading range that continues to test investors' patience and skill.

Stocks launched higher last week in another round of the hyper-volatile action that has plagued the equity markets over the last three months. The good news is that some technical resistance was knocked out in the process, potentially setting the stage for a bigger rally in weeks to come.

The not-so-great reality: Stocks remain mired in the same range that has boxed them in for the past three months because, let's face it, despite their strong move they really only ended the week a fraction above where they started the previous week.

While a sour assessment of the situation from Fed chairman Ben Bernanke sucked the air out of the room on Wednesday, he was pushed out of the headlines on Thursday and Friday by some solid earnings reports, some good news out of European economic indicators, and word that Congress passed a $34 billion extension to jobless benefits, quelling fiscal austerity fears for the moment.

Helping the utility sector -- where most of our recommended positions live -- was late word out of the Senate that cap-and-trade legislation, which would impose new costs on electricity producers, is effectively dead for this legislative session.

After faltering repeatedly, stocks have pushed decisively over the 50-day moving average, breaking the pattern of lower highs and lower lows that has contained the stock market since late April, and also pushed the market a whisker over the critical 1,100 level. 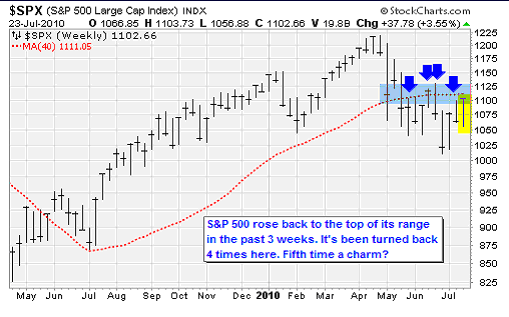 But as you can see in the chart above, when viewed on a weekly basis the week's advance looks like every other one of similar size in the past three months that failed to lead to anything more substantial. Bottom line: An up week beats a down week, but this is no time to let down your guard.

Earnings were the big news on Wall Street on Thursday again, and they came fast and furious. Here are some of the key ones from my perspective. 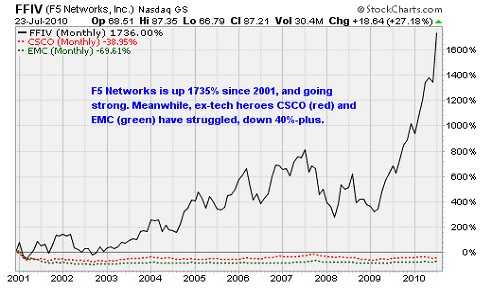 F5 Networks Inc. (NASDAQ: FFIV), the leader of the pack in our StrataGem XR portfolio and a longtime favorite of mine, reported that its fiscal third-quarter profit soared as revenue grew smartly. No tricks in this report: The story was all about rising demand and smart cost management that led to sparkling earnings. Guidance for the rest of the year was also positive, showing that this maker of equipment that helps route computer network traffic has one of the best business models in the country. The company took in 50 cents per share, up 78% from the 29 cents it earned in the same period last year. Analysts were only expecting 59 cents. That's smokin' hot. Shares rocketed 18% to a new high, making it one of the top tech stocks of the past 10 years. Keep holding.

Health care stocks were beaten down after Johnson & Johnson (NYSE: JNJ) reported earnings in line with expectations, then issued a negative forecast. I suppose there are people who are happy to see the drug makers and medical insurers sucking wind in the wake of health-care reform, but from an investor's perspective these companies are really dragging on the major indexes.

Goldman Sachs Group Inc. (NYSE: GS) was one of the stars of the show on Tuesday since it traded higher in the afternoon after swooning in the morning. Its quarterly report was a big mess, so the unraveling of the threads and subsequent rebraiding took a few hours. In the end, investors figured that a single quarter of disappointing revenue and the regulatory penalties suddenly transformed it from a disappointing growth story into a sparkling value story, so up went the price. I was disappointed that GS did not make the SEC prove its case in the ridiculous CDO fraud allegations, but the low cost of the penalty -- yes, sometimes half a billion dollars is a trifle -- was something that passes for exoneration these days. 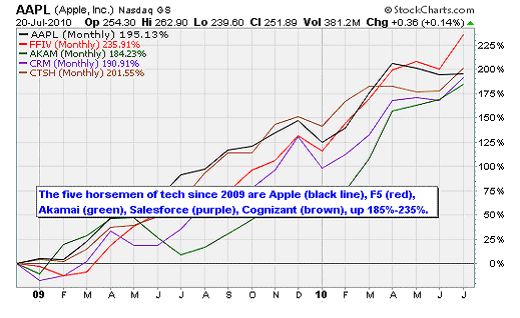 Apple Inc. (NASDAQ: AAPL) bulled its way higher following a big earnings surprise as well.  After replacing its moral compass with a faulty antenna, the company reported it sold a gazillion iPads and iPhones, and even a few Macs. This is one of the few consumer companies that still knows how to create a product cycle, and it is cheap to boot.

I've been saying for almost a year (see article) that Apple is headed for $335, and it looks to me like it will get there a year ahead of schedule. Apple is everything you ever want in a stock: It makes good products (the occasional stumble just shows it's human), piles up cash, doesn't make any stupid acquisitions, and is really cheap (forward P/E of about 14, which is very, very low). It's a stock that can be owned by growth investors, value investors, momentum investors and thematic investors, so it is no wonder that it has been one of the few great stories of the past two years.

Microsoft Corp. (NASDAQ: MSFT) was another big tech reporting in the past week, stating that it had sold 175 million Windows 7 licenses, and the new operating software is running on 15% of all PCs worldwide. That makes Win7 a big hit. The company said the personal computer market grew 22% in the last quarter, and that Office 2010 and Xbox sales are in the high teens to low 20s. That's much better than you would have any right to expect.

Market share for its search engine Bing has risen for 13 straight months; capital expenditures will rise to $2.5 billion in the coming fiscal quarter; and cash will be used for dividends and stock repurchases. Most importantly, Microsoft said companies are starting to spend again, and even remained healthy in Europe. Good news all around.

Performing best among the financials continues to be the remarkable team at American Express Co. (NYSE AXP), which I have highlighted a lot in the past year. Revenues were up 13% year over year. The company said it is seeing higher spending, lower write-offs and quicker remittances, which are all good signs for the broad economy. Provisions for losers were also down 59% year over year. 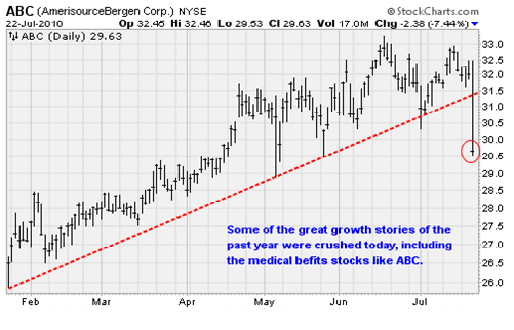 Not performing so hot on the other hand were the pharmacy services companies, many of which have up until now been stars of the market. One suffering from the attention was AmerisourceBergen Corp. (NYSE: ABC), above, which plunged out of its handsome uptrend.

Another company that was pummeled after underwhelming the crowd was Netflix Inc. (NASDAQ: NFLX). The company announced that second-quarter earnings were up 34%, but customer acquisition costs also rose -- a negative portent for the future. 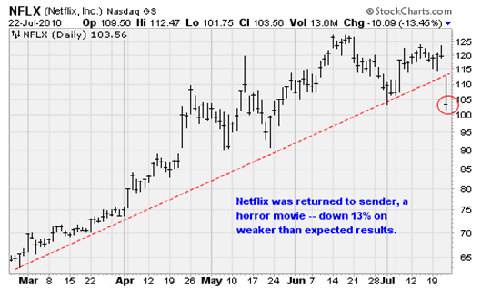 Netflix said its earnings were likely to fall sequentially in the current quarter even though it expected to add 3 million new subscribers by the end of the year. "Three million additional subscribers earns them nothing," said Wedbush analyst Michael Pachter to the wire services.

I'm showing you NFLX and ABC because it's important to realize this market is still very mixed. It's great to see the stocks like FFIV and our utilities like Cleco Corp. (NYSE: CNL) are up, but it's not all rainbows and ponies out there in the world. It's a mixed market, and there are no easy paths. If you can't just hide out in the leaders like Amerisource and Netflix, it shows that you really have to focus.

Stick with our program, and stay in synch. The outcome of this summer is still very much in doubt.

Tuesday: More bad housing news as new home starts fell to an annual rate of just 549k. This was below expectations for a 580k annual rate and the prior period result of 593k. There was some room for optimism, however: Housing permits rebounded, possibly indicating a bottom for housing starts. Solid earnings were reported by PepsiCo Inc. (NYSE: PEP), Goldman Sachs, and Yahoo! Inc. (NASDAQ: YHOO).

Monday: New homes sales for June will be reported. Sales plunged 33% in May to the lowest level seen since the data started in 1963. Analysts expect a slight rebound this time, with the annual rate increasing by 10k to 310k.

Tuesday: An update on consumer confidence from the Conference Board as well as the latest home price data from the Case-Shiller Home Price Index. AK Steel Holding Corp. (NYSE: AKS), U.S. Steel Corp. (NYSE: X) and a number of other companies report earnings.

Friday: A big day with the first estimate of Q2 GDP growth, employment cost, consumer sentiment, and the Chicago Purchasing Managers Index. Analysts expect the economy to have grown at a 2.5% annual rate in the second quarter, down slightly from the 2.7% rate seen in Q1. Chevron Corp. (NYSE: CVX) reports results before the bell.

Subscribe to Strategic Advantage and hire Markman to be your guide. For more information, please click here.]
Click Here to read an in-depth news analysis of earnings season appearing in today's edition of Money Morning.

Evidently you now condone fraud Markman? Are we to think that Government Sachs paid a half billion dollar fine because they were NOT guilty of scamming investors with their CDO gig?

The fine paid is a small fraction of the bailout package they got from taxpayers – the only reason these hoods are still in business. Shoveled their way by a King, er President who apparently decided to rifle the taxpayer till and pay off those who funded his election campaign.

Which brings new meaning to the term bought and paid for. That used to mean a buyer would use their own $ to hijack, er compel performance by another. Now all one has to do is land the right lyer, er lawyer in DC then sit back and let Joe taxpayer foot the bill for your scam, er lobbying.

The animals are running the zoo and you're apparently one of them Markman.

[…] Jon D. Markman, Contributing Writer, Money Morning As stocks have slipped lower over the last three months, copper has bucked the broad trend and broken the pattern of lower highs and lower lows it set in […]