Pessimism increased again among investors last week, as a slew of economic data stoked fears of a double-dip recession.

Indeed, housing and unemployment continue to weigh on the U.S. economy. But don't panic. Remember that the prospects for a full economic recovery are much better outside the United States, and that it's often good to be greedy when others are fearful.

Stocks lurched backward most of this week as investors digested worsening news about housing and manufacturing, then stopped and rolled forward a bit on Friday when the central banking officials said they feel Americans' pain and might do something about it sometime in the future, maybe.

The major U.S. indexes fell 1% to 2% over the past five days, while Europe and China were flat. Super-charged emerging markets like Thailand bucked the trend by rising 1.5%.  Gold rose 1.5% and gold miners rose 4%. Crude oil rose 1.8%; the dollar flattened out; and bonds pitched into the red on Friday after being up all week. 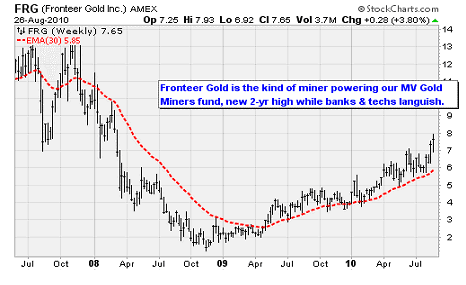 Companies making new highs in this kind of environment are really doing something special. Quick look at these three:

Throwing the morning rally for a loop was release of the Kansas City Fed Index, which sank to zero, while three of the components -- shipments, new orders and employment -- went negative. This is a third-tier economic release that does not even normally get a headline, but following in the shaky footsteps of the Philadelphia and New York area reports earlier in the week, investors are starting to get the picture: A follow-up recession may not be a sure bet, but a serious slowdown of industrial activity is knocking on the door. 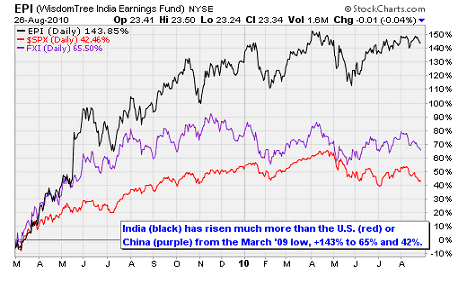 As usual these days the few bright spots of the week came from emerging markets: Ford Motor Co. (NYSE: F) announced it would introduce eight new vehicles in India by 2015, and export its Figo econo-car from Indian manufacturing plants to 50 new markets. Toyota Motor Corp. (NYSE ADR: TM) also said it would expand auto production in India, aiming to sell 70,000 of its Etios hatchback in 2011, and is thinking about selling its luxury Lexus brand in the country too.

What I want you to notice is that the Indian consumer is slowly growing in importance. The country has a well-educated, young and ambitious work force, rising wages and is heavily focused on domestic consumption, which means it is less susceptible to the ills of Europe and the United States than China. The government is as messed up as anywhere and civic infrastructure is a nightmare, but both will improve over time; the main issue is that exchange-traded funds (ETFs) like WisdomTree India Earnings Fund (NYSE: EPI) are still a reasonably good bet on this development.

The big news Friday was a downward revision in second-quarter economic growth in the United States to 1.4% annualized from the initial reading of 2.4%. Despite the market's positive reaction to the news, which was not as bad as many feared, Goldman Sachs Group Inc. (NYSE: GS) told clients that they don't believe the full impact of this downgrade has been felt in stock prices yet. The way they see it, here are the key factors spurring the whopping cut in estimates, and what they mean going forward:

1) Growth in real consumer spending appears to have softened from an already sluggish pace, with the risk running form a tepid 1.5% annualized growth rate to as little as 0.5%, which would be considered big trouble.

2) Real residential investment has resumed falling at a double-digit pace.  GS sees a 15% annualized decline for the third quarter.  Starts are headed for an annualized decline of 15% to 40%, while sales will be down at more than a 50% rate even if they recover half of the setback reported for July.

3) Real business investment was on track for a 10% annualized growth, but is now tracking much lower, with a marked decline in investment in computer equipment and software in July pointing to a weak third quarter.

4) The trade deficit ended the second quarter in a deep hole, and if the June balance holds through the third quarter, it would subtract 2 percentage points from the GDP growth rate.

In short, Goldman Sachs, which is pretty good at this stuff in my view, believes its already Street-low estimate for 1.7% growth in final real sales in this quarter may be too low. Interpretation: This is getting serious, folks.

That subhead sounds like a new candy at the Wall Street cinema concessions counter. But what I really want to talk about is the extreme levels of pessimism that are emerging.

Now don't get me wrong. There are plenty of good reasons for investors to be pessimistic, as the engine of economic growth, which is new jobs, has stalled to a stunning degree as companies hoard their cash instead of expanding. It's kind of like the old saying that "even paranoids have enemies."

But over the long history of the market we have been able to quantify extremes of pessimism and determine what tends to happen next. Our friend Tom McClellan points out that the latest Investors Intelligence survey numbers show just 22% bulls and 56% bears. You have to go all the way back to 1994 to fight as big a spread between bulls and bears as we are seeing now. It even exceeds the bearish extreme that occurred in the slo-mo market crash of 2008.

Tom notes that sentiment indicators have natural limits of optimism and pessimism. When they reach those limits, it is a sign that investors will have difficulty getting more fearful, or more optimistic.

He adds: "When they cannot get any more fearful, then only two things can happen. Either they stay precisely as fearful as that, or they get less fearful. And the process of going from more fearful to less fearful usually involves prices moving higher."

Fair enough. This is why I'm not anxious to sell short yet. I do think there is a high level of risk in the market, but with people already so morose a surprise rally is likely to unfold first.

The key news for the economy over the past week were reports that sales of existing and new homes are at historic lows. It's great that the market did not crash on this news, but really that is small comfort. There's virtually nothing happening except record affordability that can be construed as positive. Often it's darkest just before the dawn. Though, to be fair to the pessimists, sometimes it is really dark before it goes completely pitch black. All kidding aside, when the housing market is sluggish, construction, retail, banking and materials all suffer, and those are about 80% of the economy.

Key data points in backwards chronological order, with an assist from Econoday:

-- GDP growth was revised down for the second quarter to 1.6% annualized from the previous estimate of 2.4%. Consensus was for a downgrade to 1.3%, so this counted as good news. Main issue was a smaller gain in inventories and a larger trade deficit than initially expected. Forward momentum has been stymied, but keep in mind that slow growth is still growth, so fears of a follow-on recession were allayed a bit.

-- Existing and new homes sales both plunged. The main issue here is that the special tax incentives rearranged  the usual monthly pattern of home sales, and the current snapshot of this rearrangement is ugly. Existing home sales fell 27% month over month in July to a 3.83 million annual run rate, the lowest level in 15 years, and a sharp contrast to the 6.5% million rate in November 2009 and even the 5.8 million in April this year. Obviously, a lot of sales were pulled forward while the tax break was in effect. The sales pace should improve as we move away from this transition period.

-- Durable goods manufacturing outside of jet sales fell 3.8% month-over-month in July, following a 0.2% gain in June. A strong part of the recovery of the past year has been business investment in equipment. But that appears to be slowing, as non-defense capital goods orders outside aircraft in July fell 8%, following a 3.6% advance in June. Good news was that auto manufacturing is still relatively healthy and manufacturing is still trending upward -- just not as fast as earlier in the year.

-- Consumer sentiment slipped, as initial jobless claims and a sliding stock market have had a negative effect on consumers' confidence in spending.

-- Bottom line: The pace of economic growth is slowing but there is still growth. Housing is bound to improve after the pull-forward effect of the tax credit works its way out of the system. Manufacturing has slowed but is still inching forward. All in all, a poor week for economic data but not a disaster.

The coming week will feature news on consumers, with person income, consumer confidence and motor vehicles in focus, and at the end of the week the biggie: August payrolls.

Tuesday:  The Chicago PMI will give more color on Midwestern manufacturing. In June the level rose to 62.3, which indicated strong month-to-month growth. Due to improved auto and ag manufacturing, this could surprise with upside. Also, the Conference Board will announce its consumer confidence index. It slipped to 50.4% in July and is expected to fall a touch. And we'll get the minutes of the August 10 FOMC meeting at 2 p.m. ET, and traders will scrutinize for more chatter about quantitative easing. Earnings: H.J. Heinz Co. (NYSE: HNZ).

Wednesday: Sales of domestic light motor vehicles. This was up in July, but a lot of that was a boost in sales in fleet vehicles by rental car agencies. This could be weak. Consensus is 8.7 million unit rate; range is 8.6 million to 9 million. We'll also get construction spending for June, which was up 0.1% in June after a 1% drop in May. Consensus expects a 0.6% drop. Earnings: Hovnanian Enterprises Inc. (NYSE: HOV).

Why is there any reason for pessimism, let alone panic, when on the same page the Markman article begins, I am invited to turn $50 into $204,100 by watching a free presentation disclosing what no broker will talk about. I'll even spring for $250 and come away with a cool million and change. Imagine that.

Why am I fearful? Let me count the ways. Congressmen and senators from both parties communicate with their earpieces taped shut, so they don't agree on anything. Corporations sitting on tons of cash because nobody buying anything; maybe people would buy if they had the jobs that the corporate titans sent overseas (using Bush tax cuts, no less to finance the moves.) TOTAL GRIDLOCK. While the country burns, what I hear is not the sound of a demented solitary fiddle player–I'm hearing a whole symphony.

The Fed's Actions Are Boosting the Bull Cycle for U.S. Stocks

[…] find or pronounce, and all kinds of statistics about the wretched disaster that awaited in a scary September. Only it didn't quite work out that way, and once again we have to be awed by how quickly media […]