Stocks struggled over the past week as investors managed to shrug off an escalating conflict in Korea only to have renewed sovereign debt troubles in Europe slug them in the face. The Dow Jones Industrials and S&P 500 both closed half a percent lower while the Nasdaq closed half a percent higher. The European exchanges all closed 3% to 5% lower.

Yet some sectors thrived. Best groups for the week were retailers, semiconductor makers and Internet software and hardware makers, all up 3% to 5%. Major damages were mostly in large-cap banks and materials producers.

Despite the trouble, some positive patterns emerged in the United States. In my reports two weeks ago, I mentioned that the S&P 500 Index had a shot at making a "cup with handle" continuation pattern if the decline stopped immediately at 1,080. It actually did, then fell back and tested the 1,080 level again this week. 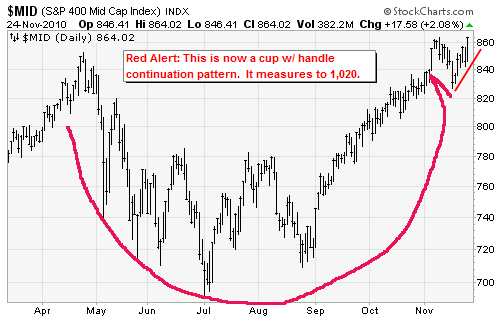 Well now the S&P 500 has not quite completed a cup with handle pattern because it will need a close above the November 5 high. But the S&P 400 Midcap Index (AMEX: MID) actually accomplished that at the close on Wednesday, as shown in the chart above.

Mid-caps, or medium-sized companies -- around $2 billion to $10 billion in market capitalization -- are almost always the best stocks to own because they've got most of the spunk of the small-caps with the financial heft and longevity of the big-caps. They're small enough to be nimble yet big enough to take advantage of opportunities.

The cup with handle pattern was first described in detail by William O'Neill, a pioneering technical analyst and founder of Investor's Business Daily. He wrote about the pattern in his seminal book, which I highly recommend, called "How to Make Money in Stocks." The cup forms after an advance and looks like a bowl or rounding bottom. As the cup is completed, a trading range emerges on the right-hand side, and the handle forms. A breakout from the handle's trading range signals a continuation of the prior advance. The pullback is a pennant, or "bull flag," which is itself a classic continuation pattern.

What has to happen next to validate this pattern is a high-volume upside breakout above the top of the handle. If that occurs -- still a big if, let's not kid ourselves -- you can start to talk about a measurement. .Although there is a lot of debate in technical circles about whether measurements are valid, they at least help us get a rough idea of the magnitude of the next move.

The projected advance following the breakout is estimated by measuring the distance from the right peak of the cup to the bottom of the cup. In the case of the Midcap 400, that's roughly 860 minus 700, or 160. Then you add 160 to 860 and come up with the target of 1,020. As you can see in the chart above, that would take the Midcap 400 to a new all-time high by 95 points.

The S&P 500 is 40 points away from closing above its Nov. 5 high, which is a lot. However if it continues the trek and breaks out to validate its own cup-with-handle pattern, the move would project 210 points to 1,435, which would take the index back to its January 2008 level. 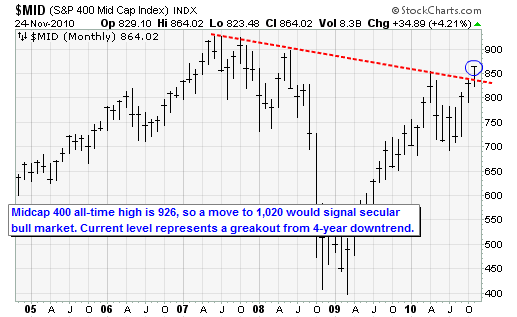 Before moving on, let me note that if the Midcap 400 closes November at the current level, it will amount to a breakout over the four-year downtrend marked by the red downtrend line in the chart. That would be a great step forward, since there would be much less "gravitational pull" or resistance on the index and it would have a great shot at busting out to a new all-time high.

Before you scoff, keep in mind that this is what quantitative easing, or a liquidity flood, is all about. This is the type of breakout on liquidity that occurred in the mid-1980s, the early 1990s as well as the mid-2000s. It's not unusual. It's normal. 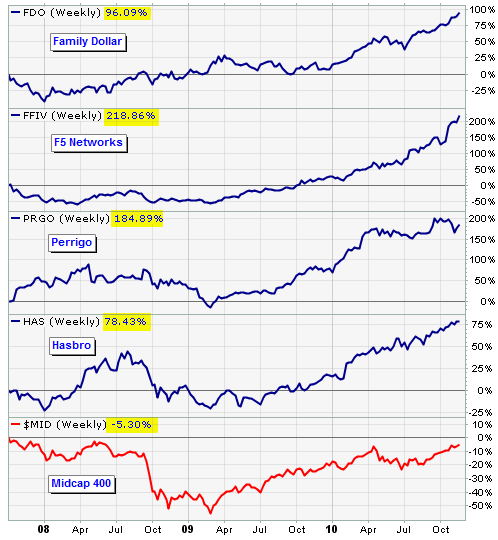 And this all makes a lot more sense if you look at the charts of individual stocks rather than the broad indexes. As you know from my charts over the past year, 2007 highs have long since been surpassed by major mid-cap stocks I have recommended in the past few months such as Ross Stores Inc. (NASDAQ: ROST), Hasbro Inc. (NYSE: HAS), F5 Networks Inc. (NASDAQ: FFIV), Perrigo Co. (NASDAQ: PRGO) and Family Dollar Stores Inc. (NYSE: FDO). The charts above start at the beginning of the bear market on October 10, 2007. All of these stocks, and many more, have pushed past that old high and are on into their own private secular bull markets.

So the idea that the Midcap 400, shown at the bottom of the clip, should follow is not exactly a radical or outrageous concept. The midcaps on our list are the leaders, and the troops will eventually follow. That's about as clear as I can make it. Make sure you are prepared.


Moods were brightened over the past week by some positive news on the economic calendar, particularly concerning consumers. Key to the improvement are renewed signs of traction in the labor market, as initial claims fell 34,000 to 407,000, from 443,500 last week. Moreover personal spending was reported up 0.4% month over month and 3.6% year over year, while income surprisingly rose 0.5% month over month and 4.1% year over year. No wonder Monster Worldwide Inc. (NYSE: MWW), the premier online jobs website, jumped almost 4% on the week.

Just a quick word now about retail stocks. We only have two of them on our list, ROST in StrataGem and FDO in StrataGem XR. They were each up around 2.5%, which shows that a rejuvenated consumer was certainly on investors' minds. Across the whole market on Wednesday, I noticed that several high-end retailers such as Coach Inc. (NYSE: COH) were on the move as well.

Putting that together with recent news about fewer home sales, maybe we are witnessing a scenario where people are putting more of their money into clothes and cars as they are spending less on mortgages and home furnishings. If that's true, then the holiday season could be strong.

A long time ago, a great retail analyst told me that the back-to-school season is almost always the best predictor of the holiday season. If back-to-school is good, then the holidays should be good. Well, back-to-school started slow this year but ended strong. I'll be surprised if shopping over the next month fails to provide at least a modest upside surprise.

Put your 1990s songs on your iPod -- it's time for investing in the web again.. What's working in technology lately is the mobile Internet stocks. They have been the most successful part of the Nasdaq universe, and trends tend to accelerate into year-end as fund managers pile into winners. Herd activity, maybe, but then this is where the growth is happening.

Over the past week, while most other stocks were sliding, Santa's elves were buying shares of Netflix Inc. (NASDAQ: NFLX), F5 Networks, Apple Inc. (NASDAQ: AAPL), Salesforce.com Inc. (NYSE: CRM) and Riverbed Technology Inc. (NASDAQ: RVBD), among others.

I'm telling you, this mobile Internet thing might be big one day. Do you know anyone who has a "dumb phone" on their holiday list? Like, ''Hey mom, I want a clamshell Nokia (NYSE ADR: NOK)?'' No, that is just not happening, and never will happen again. It is going to be iPhones and iPads and Netflix subscriptions and iTunes cards and Android phones and, well, you get the picture. The technology is useful, it is entertaining, it is easy to use, and it is not ridiculously expensive. My research suggests that this is going to be a digital holiday like none other. Apple stopped out of StrataGem last week unfortunately, but if you hung onto it keep holding as it should reach a new high this year. 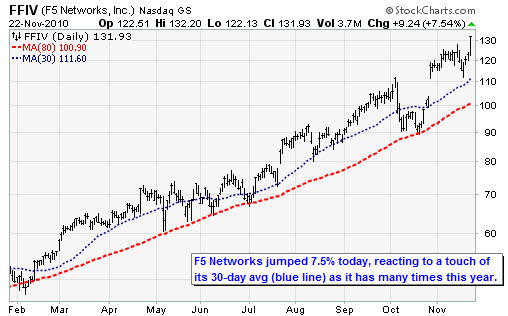 Of course, an application delivery controller from F5 Networks is not something you will give your kids in a box. But if your kids want to press a button on their iPad and watch a Netflix movie and have it appear almost instantly, you can bet there is an IT professional somewhere who has bought a slew of F5 devices to make that happen cleanly and smoothly. That's why we love its shares, and why it was up another 7.5% for us today in the StrataGem XR list. It's not as cheap as it was a year ago, but it is gaining a reputation and status as one of the premier growth stocks of our era and that means it will be pushed to higher valuations. Put it on your shopping list during dips like last week if you don't own it already.

Every so often over the past two years of recovery investors have been thrown off by bad news from faraway places like Dubai, Greece, Spain, Thailand, Indonesia and China. Most of it has turned out to be troublesome for the country involved, but not so bad for the best U.S. and global stocks.

Political turmoil is just not one of the criteria that amplifies or detracts from stock returns. I have had to learn this lesson a few times, and I probably will have to learn it again at some point. But the main reason it doesn't matter is very simple: Companies see the same trouble that we do, but much sooner, and they adjust.

Great example is International Business Machines Corp. (NYSE: IBM). Ten months ago news that European governments would need to cut fiscal budgets to bring deficits under control made me think that most large U.S., European and Indian companies that sold information technology services to the United Kingdom, Italy, France and other governments would suffer this year. 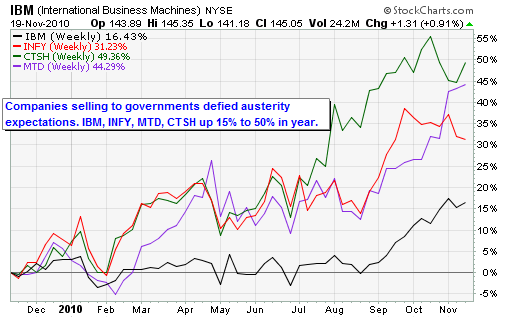 The key elements influencing stock prices are easy credit, low inflation and legislated fiscal stimulus that is still working its way through the global financial system. Stay focused on individual companies' achievements, and not the missteps of governments.

We ought to be in the strong part of the cycle now. Stocks should get the benefit of the doubt over bonds and cash. If they fail this week and in December, expect a weak 2011.

At the beginning of the week, economic news will be dominated by retail sales reports and a speech by Federal Reserve chief Ben Bernanke. At the end of the week comes the big look at progress in employment: the nonfarm payrolls report.