Stocks clicked around the flat line much of the past week until the tumblers of the lock finally fell into place and prices were freed to go higher on Thursday and Friday. 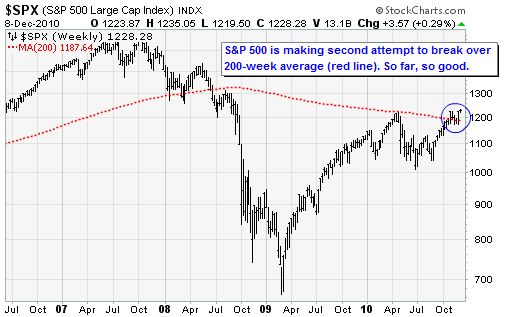 Although the action was a little gnarly at times, take a step back and check out the weekly five-year chart of the S&P 500 above. I've talked for years about the importance of the 200-week average, which is the red line. It tends to serve well as the barrier between bull and bear cycles.

The last bear market only really got serious once the S&P 500 plunged down through the 200-week line in July 2008, having first touched there briefly in March of that year. Then the S&P 500 was repelled at the 200-week average in April this year. And finally that the line acted like an electric fence as recently as early November.

Well, after past two weeks we're back above the line. So it really is incumbent upon bulls to stay up here and not dunk under the line again, which is now at 1,188. We could see a lot of skirmishing back and forth before anything is really settled. But once bulls manage to maintain three or four solid weeks above the line, we can probably look back over our shoulders at the 1,175 level as an area that may not ever be visited again.

In 2004, bulls and bears spent about ten months battling around the 200-week average -- spending about six weeks above, then dipping to it; then rising for several weeks before doing that once more, and then twice more. But finally bulls managed to yank back control right at the 1,175 level in December that year, ironically enough, and were off to the races for the next three years.

It's really a dividing line between world views as much as it is simply a mathematical average. Will world governments' attempt to stimulate growth through monetary and fiscal spending prod companies and consumers to succeed, or will the forces of entropy overwhelm their efforts?

Metaphorically, that is the battle that we are witnessing in studying this chart. Keep an eye on it.

The most successful stocks last week were banks and financial services, led by a stirring advance of Bank of America Corp. (NYSE: BAC), as shown above. Banks are getting back in a groove now that 2011 economic growth assessments are being revised upward due to the titanic stimulus package embedded in President Obama's tax compromise.

Still, the banks have disappointed us so many times we need to make sure not to get overly excited. 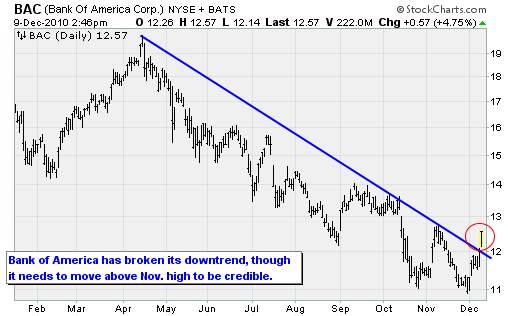 Why get excited at all?

Well you know it's been a long time since this happened but way back in olden times you needed banks and semiconductors at the front of the parade to make sure that a bull market was legit. The bulls need banks to lead just like the Miami Heat need LeBron James to lead. They're a confidence booster, they're the funding agents, they're the artillery and ammo and guts of any major rally.

If the banks will resume their leadership role by earning bigger profits from lending than handouts, the rally can go places. If not, well, it's back to the spin cycle. Watch BAC and other brokerages like a hawk. For fundbuyers, my preferred pony in this race is SPDR KBW Capital Markets exchange-traded fund (NYSE: KCE).

A key reason for the improvement in banks was a comment from Goldman Sachs Group Inc. (NYSE: GS) that noted that several are making plans to return capital to shareholders via dividends and share repurchases. Among the best performers were the super-regionals that are still deeply discounted, such as Zion Corp. (Nasdaq: ZION), Regions Financial (NYSE: RF) and Fifth Third Bancorp. (Nasdaq: FITB), all up 5% to 6.5%. 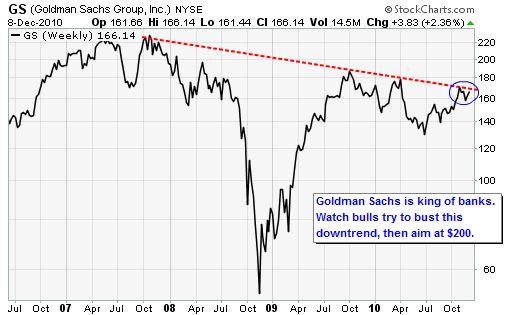 Large brokers such as Goldman Sachs and Morgan Stanley (NYSE: MS) rose 2% to 3% on that comment. This group is the most hated in America because of its poor judgment in the mid-2000s boom time and the resultant government bailouts. With that distaste comes low valuation, so once these companies can claw their way out of the doghouse they can lead the market.

So while you are watching BAC for its importance to banks, watch GS for its importance to brokerages. It is a ringleader. It has been hemmed in by a heavy downtrend since October 2007. A weekly close for GS above $172, and then $180, would be a strong sign that this entire sector is on track to be rehabilitated.

Meanwhile, the most unusual change last week came in the price of U.S. Treasury bonds, which plunged again as market participants came to believe that the White House tax compromise might be effective at stimulating the economy.

In the twisted world of bonds, that's a bad thing because it causes inflation, which is a debt killer. Of course the White House effort would also lead to a need to sell a lot more bonds to finance the government in lieu of taxes, which would further lead to lower prices.

Moreover, the credit ratings agencies Moody's Corp. (NYSE: MCO) and Fitch Ratings Inc. both commented that the United States needed to consolidate its finances -- i.e. bring revenue in line with expenditures -- in order to maintain its AAA sovereign rating.

This is not as much of a negative as you might expect. Because there are a lot of pension fund managers that need to buy long-term assets like bonds to match against their long-term liabilities, they are shifting over to corporate bonds. And that money is helping the financial situations of major industrial companies, including semiconductor makers and chip equipment makers.

Case in point: One of the most successful chip makers in the world has been tiny Atmel Corp. (Nasdaq: ATML), which was recommended in my portfolio in January this year. It's up 150% since. Atmel makes integrated circuits for a wide range of applications including touch screens on mobile devices, remote keyless entry devices for cars, and temperature sensors in washing machines. These are the little brains that make all of our cool electronics work, and will be an important part of the recovery. To participate in the recovery via chips, the best fund to own is SPDR S&P Semiconductor ETF (NYSE: XSD).

ONE FOR THE ROAD

Goldman Sachs was out last week with a positive view of the next year. A lot of GS equity research is terrible, but their big-picture stuff tends to be good.

Let me save you from reading a 21-page report. The upshot is that economist Jan Hatzius believes gross domestic product (GDP) growth will clock in at 2.7% in 2011 and 3.6% in 2012. Those are both below the long-term trend of 4%, but this is still considered a rosy picture.

1) Solid if unspectacular, growth in consumption.

More specifically, GS Research sees the S&P 500 rising to 1,450 by the end of next year, representing 21% total return. That would come from equal parts 12% earnings growth (to $94 for S&P 500 companies in 2011 and $104 in 2012) and price/earnings (P/E) multiple expansion to 13.9-times. The team sees a large "investable gap" between many portfolio managers' perception of investment risk and their constructive outlook. The best way to pursue this line of reasoning is to buy profitable, high-growth, cyclicals and shun consumer staples, health care and utilities.

How long should I hold onto silver bullion?

I am continually amazed at the lack of Jon's ability to see the big picture. Goldman Sachs' forcasts are not any better than Jon's relying on them for his forcasts. Even if the U.S. GDP was up as much as 4 or 5%, the US Dollar is down against other currencies by far more than that this year. So the rose colored glasses that Jon is using to give his forcasts, have blinders on them. And when you consider that the U.S. banks are in such a mess, when you take the toxic assets off of their revenue statements (the accounting trick of allowing the banks to move toxic assets off their balance sheets as liabilities and on to their Profit and Loss statements as revenue is tantamount to fraud) they look brutal. They even look worse when you consider that most of their revenue has been generated from borrowing money from one arm of the government and then lending it back to the government at a profit to the banks. Of course the government is all for this because it makes it appear to other large lenders such as China and Japan, as if there is an actual market for this ponzy scheme paper. China has already figured this out and is cutting back on their purchase of USD securities. So when the Fed has to raise rates in order for the government to borrow the money needed to finance its deficit spending, watch the house of cards start to fall, beginning with the banks.

This whole article doesn't seem to jive with whats happening. The whole stock market is a house of cards just waiting for a reason to collapse.