Stocks tiptoed through a typically introspective, no drama December week in the past five days, with the Dow Jones Industrials rising 0.7%, and the Nasdaq, S&P 500, and Russell 2000 all rising about a third of a percent.

While an 0.3% gain doesn't sound like much for a week, it is actually a great result. If the market were up 0.3% every week for 52 weeks, it would be up 17% for the year without dividends, which is about double the long-term average. And just to round out that idea, if the market were up 17% every year for 10 years, it would end the decade up 380%. Small amounts add up due to the magic of compounding.

The market was not fully in gear across all industries. The deep cyclicals performed best, led by steelmakers, which were up 6.5% as a group. Leading the way was mini-mill Nucor Corp. (NYSE: NUE), which rose 7% for the week after offering a bright forecast for the first half of 2010. Consumer staples were another plus, led by food makers such as Hansen's Natural Corp. (NASDAQ: HANS) and Boston Beer Co. Inc. (NYSE: SAM), up 7.5% and 13% for the week.

Retailers and financials fell back the most during the week led by the 18% plotz of Best Buy Co. Inc. (NYSE: BBY). Consumer spending is actually on track, as I'll discuss in a moment, so this was mostly a BBY problem not a problem for the whole industry. 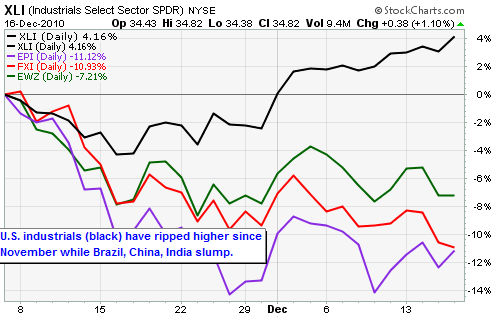 Shocker, huh? The surprise of the season has been the revenge of the American rust belt, now sporting a shiny new General Motors Co. (NYSE: GM) and Ford Motor Co. (NYSE: F) badge, as overseas markets have stalled.

A veteran investor once told me that you never really know if a peak in a market has occurred until you can look over your shoulder three months later and actually see it standing there like Mt. Rainier. At the moment, we can look back over a shoulder and at least see a big, lonely hump for the China, Brazil, Indonesian and Indian stock markets in early November.

This divergence between U.S. and overseas returns has only been in force for a month, so it might not be significant, but it is still something to think about running into January as these things tend to persist. In the chart above, you can see that SPDR Industrials are up 4% since Nov. 4, while iShares MSCI Brazil Index ETF is down 7% iShares FTSE/Xinhua China 25 Index ETF (NYSE: FXI) is down 11% and the Wisdom Tree India Earnings Fund (NYSE: EPI) is down 11%.

The explosive November high was coincident with three overlapping factors: The Fed's official announcement of quantitative easing; talk among emerging market officials of "capital controls" on foreign investments; and the exact bottom of the U.S. dollar. And there was one more wrinkle that's not often discussed. The tops in both India and Indonesia occurred coincident with the visit of President Obama to their capital cities. That may well have induced a final, emotional surge.

I will leave it to future global economics PhD candidates to decide which of those factors led and which followed, but if pressed for my guess, capital controls and the dollar would get top billing.

The stunning part of that chart is the wide separation between the strength of the XLI in mid-November vs. the weakness of the emerging market funds. Those kinds of divergences can provide fantastic clues about the future direction of markets. The performance gap between the India fund and the Industrials fund is 16 percentage points in three weeks, which is huge!

Let's think about this point for a moment. Several of the most important turning points in the relative performance of sectors and regions occurred at times of stress.

This most recent divergence in returns occurred at a time of stress for European markets over debt problems in periphery countries and for Asian markets over deep concerns that China will throttle back growth to curb runaway inflation. 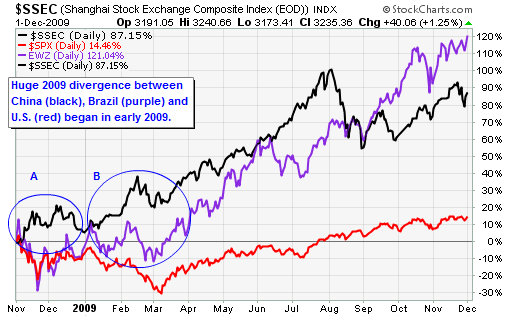 Two other recent times of stress in which persistent performance divergences occurred:

-- In December 2008, when U.S. and European markets were convulsing with pain in the final months of the credit crisis, the Chinese market distinctly stabilized and moved higher, as you can see in the circle marked A in the chart above. (The Shanghai market is the black line; the S&P 500 is red and the Brazilian stock market is purple.)

And then as the pain in Europe and the United States recommenced in January and February, 2009 at point B, the Shanghai market continued to diverge and rise. And as you can see those divergences were persistent throughout the rest of the year as Chinese and Brazilian stocks spurted higher in two other instances. 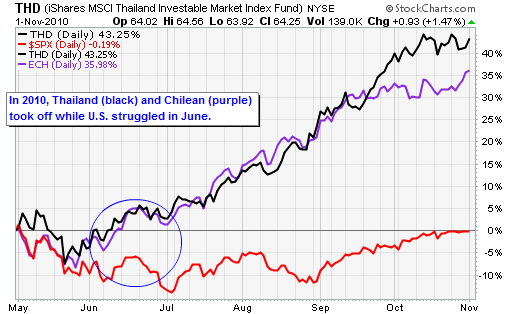 -- In May 2010, markets sold off around the world. In June, the U.S .market continued to stumble, but the iShares MSCI Thailand Index Fund ETF (NYSE: THD) and iShares MSCI Chile Investors Market Index Fund ETF (NYSE: ECH) recovered quickly and began to sprint higher; they are the black and purple lines above. Then even as the U.S. and European markets strengthened in July the Thai and Chilean markets kept rolling and really gunned it in August when Western markets slumped again.

So how is this relevant to the present? These scenarios recur again and again in markets, which is why we must constantly be on our toes and observant.

One of the hardest things to do is to let go of your winners when they falter -- particularly when you have spent a lot of time learning about them, as we did with Indonesia, Turkey and India. But to perform well in the market and maintain a consistent edge, you must always be prepared to kiss successful positions goodbye and move on.

Because Brazil and China were so successful in 2009 the tendency was to want to continue to own them in 2010. But they really underperformed in 2010, and are still badly lagging. My customers have managed to avoid them this year, which was much to our benefit, and stick with the more successful regions of Thailand and Chile, while adding a big helping of U.S. funds. 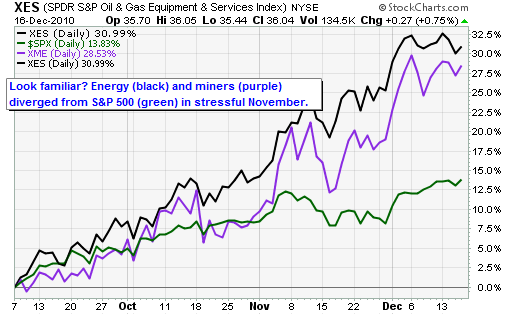 Right now we are observing a powerful positive divergence in U.S. industrials and midcap growth, as well as energy in the form of SPDR S&P Oil & Equipment Services ETF (NYSE: XES). But the new anomaly that has emerged is Powershares Dynamic Biotech & Genome ETF (NYSE: PBE), almost out of the blue, as described on Thursday.

Personally I am loving the strengthening of U.S. industrial companies' shares. Not to be all patriotic, but the world economy will function better if the lights stay on at American factories. In the market on Wednesday, investors were showing their newfound love for Caterpillar Inc. (NYSE: CAT) and FedEx Corp. (NYSE: FDX) and United Parcel Service Inc. (NYSE: UPS).


And basking in that glow were the shares of big companies that sell into truck and auto manufacturing floors, such as Honeywell International Inc. (NYSE: HON) and Danaher Corp. (NYSE: DHR). Likewise the steelmakers, such as Nucor, were able to report improved expectations for pricing and sales next year.

It will really help 2011 if these firms, the heart and brains and soul of U.S. prowess, can stay in this groove. They will start hiring, their new employees will buy houses, and all will be well in the land.

Well, that was a provocative subhead. All I meant, though, was that the new high list this week has been filled with biotech drug makers, which has to be considered curious if this is supposed to be a period of risk aversion. Leaders on Wednesday were Amarin Corp. plc (NASDAQ ADR: AMRN) of Ireland, Valeant Pharmaceuticals Intl. (NYSE: VRX) of Canada, cardiac device maker Cardica Inc. (NASDAQ: CRDC), ophthalmologic device maker Akornnc. (NASDAQ: AKRX) and vaccine developer Emergent BioSolutions Inc. (NYSE: EBS).

This is a fascinating anomaly. When people are worried, or scared, or running from risk as if it were an acid fire, they do not stop for a moment to eat petits fours and sip tea. They drop everything and scram. But that is not what is happening this week. Investors are buying biotechs, which are the looniest set of stocks on the planet, suitable only for scientists, dreamers and snaggle-toothed gamblers.

The average biotech has about as much chance of becoming a successful company over the long term as I have in being named king of Egypt. Well, maybe the odds aren't quite that long. But the point is that when the investment world is about to spin off its axis, biotechs do not lead the new highs list. So confidence remains relatively strong, as well it should.

Looking at all the sector and big-cap stock charts over the past week, and comparing them with economic reports and comments by the Federal Reserve in on Tuesday afternoon, I have been struck with the potential for the banks, credit companies and asset managers.

These stocks just have not moved anywhere close to as much as the rest of the market, and yet once they have cleaned up their balance sheets and begin to lend again, they should be in position to emerge from their doldrums and take the lead. The other day, I showed you that JP Morgan (JPM) shares are stuck in a narrow range. And that continues to be the case, as they were repelled again on Tuesday. But eventually -- don't know exactly when, maybe in January, which is always seasonally bullish for the banks -- they can get rolling.

Why would this happen? Keep in mind that no matter what else happens, the Federal Reserve has vowed to keep pumping money into the U.S. economy by buying bonds. Fed credit expanded by $35 billion, or 1.5%, last week, according to bank analyst reports. The central bank has expanded its balance sheet by $83 billion so far, which is just 14% of its stated program of $600 billion. A lot of that money will go into productive activities, but some always leaks out into speculation and investment, and since the banks are cheap and liquid, they are prime candidates.

To me the whole group looks a lot like Brazil (EWZ) and other emerging markets (EEM) looked at the start of the summer of 2009. Shares have come down a lot, and then moved sideways to form a very long and wide base, and have just recently begun to move up again. If they can break out of the consolidation, they should be good to go. And I would recommend adding to our SPDR KBW Capital Markets ETF (NYSE: KCE) position, and potentially swapping out one of the emerging markets funds to add iShares Dow Jones Regional Banks Index ETF (NYSE: IAT).

We may not like what the Fed is doing, we may think it leads to a dangerous bubble, and just kicks the can down the road. But investing is not a civics class or an exercise in ideological puritanism. You have to play the hand you're dealt. For now that still looks to me to be materials, energy and tech, with the potential for financials very soon. 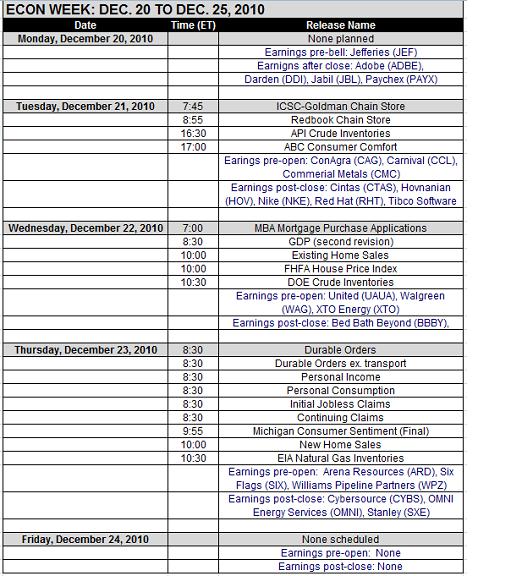