Stocks drifted quietly in the past week, seemingly satisfied with the status quo and in no hurry to get to their next destination. The Dow Jones Industrial Average, Standard & Poor's 500 Index and Nasdaq Composite Index all clocked in tandem for a loss or gain of +0.1% to -0.1%.

Overseas stocks were the only major winners, with developed markets outside the United States up 1.4% and emerging markets up 2.2%.

Looking back at all of 2010, here are a few stats that stick out:

— Developed markets outside the United States were up 12%, and emerging markets were up 16%. The best performing emerging markets included Peru, Thailand, Colombia, and Chile. And the biggest disappointments were Japan and Brazil. 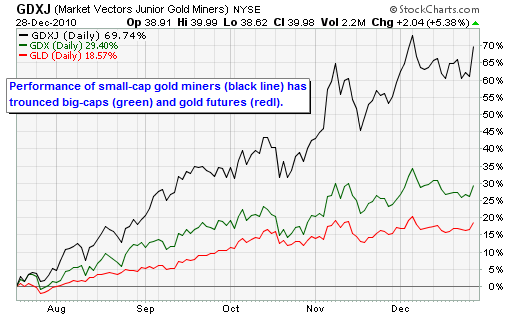 — Commodities were big, with gold futures up 30%, copper up 32%, silver up 82%, cotton up 96%, coffee up 65%, and crude oil up 15%. Disappointments were natural gas, down 21%, and chocolate, down 11%. Keep in mind, though, that shares of the gold, silver and copper miners tend to perform better than the physical commodity due to their advantage of operating leverage as prices rise.

The main good news in the past week was the jobless claims number, which was a bit shocking for those who believe the labor market stands no chance of improving. Jobless claims came in at 388,000, compared to the consensus 425,000. Let's hope that claims stay under the 400,000 level, as that will be a strong indication that companies are finally hiring again, as they should in the third year of a recovery. The big payrolls report will come on Jan 7.

Housing also provided a rare smile, as the U.S. Pending Home Sales Index rose 3.5%, compared to consensus expectations of a 1.5% loss. This index reflects contracts, with closings coming one to two months later. Due to its lag, the figure was taken to mean that December and January could be good months for home sales.

Now comes 2011. I'm not much of one for long-range forecasts, but just to be part of the predicatariat, here are a few thoughts: 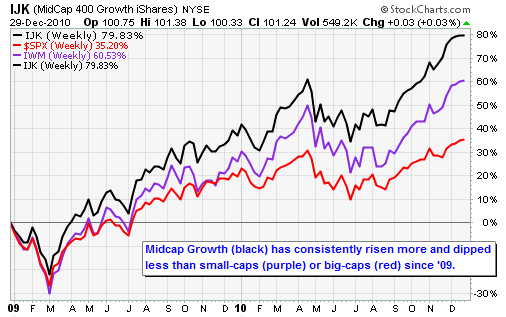 — Over the next year, I expect the faster growing medium-sized companies — the ones in the iShares S&P Midcap 400 Growth Fund (NYSE: IJK) slice of the market capitalization and valuation pie — to continue to dominate in the portfolios of the more successful fund managers. Smaller companies might outperform on a raw return basis, but with the sort of higher volatility that drives people crazy.

— If the year is marked by modest growth then energy and materials stocks should find favor. Energy stocks of all stripes would work, running from oil and gas wildcatters to energy services providers and coal miners.

This has been a theme of mine for three years, and I really think it is still accelerating, not maturing. Could Google finally break out again and show everyone it knows how to commercialize its amazing business reach? Sure, why not. Could Google reach $1,000 in 2011? It could. 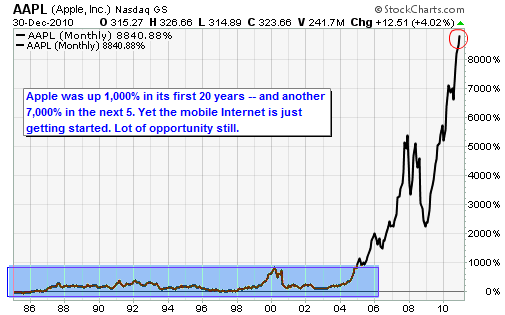 — Online shopping should continue to grow, far outpacing terrestrial chain stores. This has a worrisome implication for malls. Here's an interesting thought that I picked up from an interview on Bloomberg TV this week: If online shopping continues at its current rate of growth, then the country has way too many physical stores. We got a whiff of this with the big earnings miss at Best Buy Co. Inc.(NYSE: BBY) two weeks ago, and Sears Holdings Corp. (NYSE: SHLD), the largest department store chain, is in the dumps. Meanwhile, Charming Shoppes Inc. (Nasdaq: CHRS) said it would close 100 stores, Loehmann's filed for bankruptcy again, as did A&P supermarket, and Wal–Mart Stores Inc. (NYSE: WMT), which makes up 10% of total U.S. retail, has said it plans to build smaller stores. This could be big trouble for commercial REITs. 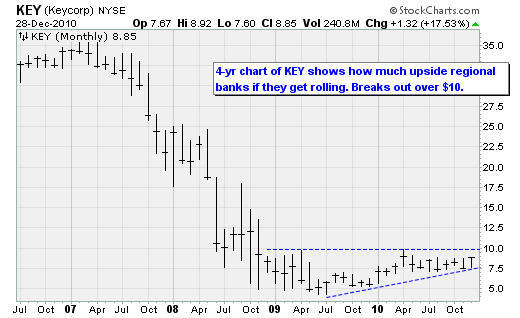 — Banks are very cheap, and would not need much of a catalyst to get going. They really need a recovery in housing to strengthen materially, and housing needs an improvement in the labor market. It all goes hand in hand. Don't expect it to be obvious, though. Investors will sniff out a labor, housing and banking recovery before it hits the headlines, so if you want to play this group you will need to be willing to buy rising banks even if it does not appear to make logical sense at the time. One big cap to watch would be Bank of America Corp. (NYSE: BAC), which could advance back toward $20 a share.

— An improving economy always features stunning comebacks from companies that went bankrupt, shed their debts, and have come back better than ever, with a chip on their shoulders. A few to watch in this regard are forestry products producer AbitiBowater Inc. (NYSE: ABH), and chemical makers LyonellBasell Industries NV (NYSE: LYB) and Chemtura Corp. (PINK: CHMT).

— Brazil suffered through a relatively weak 2010, but some new political and economic developments bode well for the future. We avoided it all year, but we might well find it in our RiskTaker ETF list before too long now that it's had a nice long rest. Other surprise candidates for our ETF list would be some of the smaller developed nations of Asia, such as Taiwan and South Korea.

— Dominating political headlines will be the way the Obama Administration works with a Congress that is hellbent to curb spending, or so they say. Investors will panic when it looks like Congress is going to pull the plug on spending, and relax when the U.S. Federal Reserve and White House ultimately win a technical knockout on points. 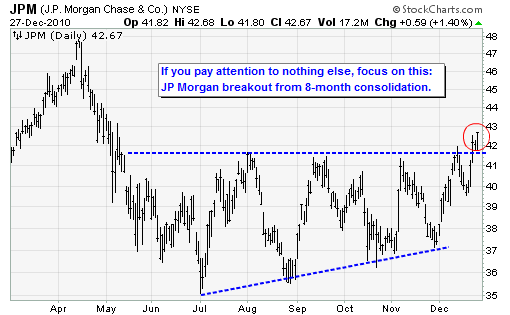 Financial stocks were the exciting leaders of the past week, led by beaten down insurers like AIG and capital market powerhouses like JP Morgan Chase & Co. (NYSE: JPM), with all flags waving. This divergence in favor of financials is important. If the bulls can resurrect the big banks at the same time that they have resurrected big oil companies like ExxonMobil Corp. (NYSE: XOM) they can really get something rolling in the new year and stick bears right in the eye.

Remember: The big banks like JPM tend to lead the market up and they tend to lead the market down. Look at the chart above. You can see that JPM started falling in early April well before the rest of the market tipped over, and its decline was unrelenting to the July bottom. Then it had a radically sharp rebound to an August high, leading the market again. Then it declined until bottoming in a five-day consolidation in the last week, which in turn led to a sharp advance in September.

JPM next topped with the market in early November and plunged into Thanksgiving week before stabilizing with another one of its patented five-day stabilizations. Then it ran higher into December ahead of the broad market.

And now what is JPM signaling? Well it broke out of an eight-month consolidation three sessions ago, and has been acting much stronger than the rest of the market, with a blustery 1.4% advance during an otherwise lackluster session on Monday. Volume was low, as it was for the whole market, but we'll give it a pass on that due to the storm.

The point is that JPM has been the pointer dog, or the LRRP, as soldiers in Vietnam used to say — on "long range reconnaissance patrol". If the past pattern is to be believed, it is scouting out the enemy territory and as it moves forward, it shows whether the coast is clear. My expectation is that if JPM keeps up this pace, it is clearing the road for the rest of the market to follow.

There is no real resistance until $46, which is a staggering 7.8% higher than the current quote. If the rest of the S&P 500 were to advance the same amount, that would be the 1,335 level of the S&P 500. That would put the benchmark index back at its June 2008 level, which would be awesome and shock a lot of people. Don't forget the S&P Midcap 400 is already back to its October 2007 high and the Nasdaq is back to its December 2007 high.

It wasn't just the big banks clearing the path higher this week, either. Regional banks also rose, as did asset managers and brokerages such as Franklin Resources Inc. (NYSE: BEN), Charles Schwab Corp. (Nasdaq: SCHW) and Goldman Sachs Group Inc. (NYSE: GS). This is beginning to look like an important upside divergence during a time of stress or flatness. I should give that a fancy acronym. When one group rises at a time when many other groups are malingering, it is typically quite bullish for the outperforming group over a longer period of time. 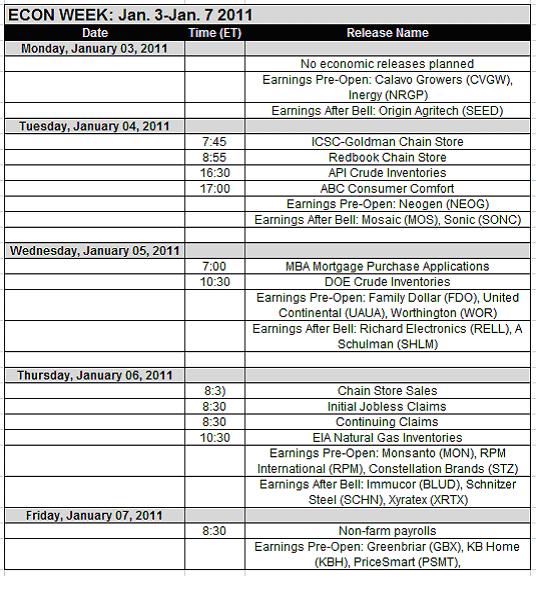 good article, clearly written compared to so many vague and uninteresting.

Simply stated…."the people/money running the world will always do well due to the fact that the Federal Reserve will make moves to protect/assist so they will continue to be profitable!" And,
"regardless how it effects everyone/everything else!"