Stocks survived a big test of the winter rally on Friday as they finished a positive week with mild losses.

The Friday session featured a report on non-farm payrolls that came in worse than expected, but not egregiously so. Energy, industrials and utilities fared the best, while financials and telecoms slipped the most. Treasuries blew higher across the board, showing again why we always say that the bonds love misery.

Earlier in the week, I forecast that a disappointing payroll number and a modestly negative reaction would be the best possible result for bulls for three reasons: a) it maintains pressure on the Federal Reserve to keep interest rates low and to continue buying assets; b) it keeps pressure on the new Congress to keep up the pace of fiscal spending; and c) it provides a mildly oversold technical condition that provides a better base from which to rally later in the month.

Large caps outside of tech had a hard time making progress against a number of headwinds, including a smash-up in retail following persistent reports that holiday sales were merely very good and not amazing.

Laggards in the week were telecom, energy, food and retail. There is no better display of the change of tone among consumer staples stocks than the recent four-day decline in auto parts retailer Autozone Inc. (NYSE: AZO), above, which had been performing incredibly well in the past several months. As you can see it has dropped out of its September to December uptrend at the start of 2011 so fast it looks like a transmission has fallen out of a car.

Initial unemployment claims took the focus on Thursday the start of the day because they showed a touch less progress in the labor market than many expected. Claims rose 18,000 to 409,000 in the week ended Jan. 1, reversing the big decline seen last week. The Labor Department did not specify any problems but most analysts suspect that the East Coast snowstorms were to blame.

Clearly change is afoot, as we can see in an updated chart of the U.S. dollar. The dollar had been repelled at its 120-day average in December, November and August last year, allowing the "risk trade" in commodities and emerging market to rip higher. The opposite happened on Thursday instead: Investors seeking safety barreled into the buck, and precious metals and emerging markets tumbled.

So is that a sure negative for risky assets on Friday and the rest of the month?

No, and here's why: This is where the market really shows its goofy side. When non-farm payrolls has come in at 25,000 less than estimates, or worse, over the past 20 years, the next two weeks were actually positive 64% of the time! We've talked about this many times: Investors tend to have a counterintuitive reaction to these payroll reports, and even more so now that bad numbers are expected to encourage the Federal Reserve to keep up its much loved quantitative easing program.

Bottom line: Bears are on the run again after a poor jobs report failed to ignite a sell-off. Although the December report was lukewarm, the reality is that investors realize that jobs are on track to grow throughout 2011, and my expectation is that by the end of the year the unemployment rate could fall as low as 9.0% -- weak, yes, but a big improvement.

Moving on, the other big story in the market this week was the slamming of retail in the wake of weak numbers from Target Corp. (NYSE: TGT). Thomson-Reuters same-store sales index logged a 3.1% comparison in December, versus the 3.4% expectation. And news service StreetAccount's beat/miss ratio slipped to 56%/44% from 77%/23% seen in November. Analysts observed that retailers lacked products with pizzazz. After hours, Liz Claiborne Inc. (NYSE: LIZ), which produces a lot of premium middle-market brands like Lucky jeans and Juicy Couture, reported a weak number and was slammed -20%.

But enough about the bad news, let's go to the good news. And that was in tech, where we have a lot of plays. Semiconductors, represented by our SPDR S&P Semiconductors ETF (NYSE: XSD) fund, ripped higher led by mobile graphics and telecom chip companies like Marvel Technology Group Ltd. (NASDAQ: MRVL), Nvidia Corp. (NASDAQ: NVDA), Cavium Networks Inc. (NASDAQ: CAVM), Qualcomm Inc. (NASDAQ: QCOM) and Texas Instruments Inc. (NYSE: TXN). Microsoft Corp. (NASDAQ: MSFT) also flew higher on excitement about its surprisingly strong offerings at the Consumer Electronics Show in Las Vegas, and even Google Inc. (NASDAQ: GOOG) shook off some cobwebs and rose two days in a rows.

The connection: The mobile internet. I know you're probably tired of hearing me rave about it, but there's no getting around the fact that accessing the web and social connections via handheld devices is the hottest thing in consumerism. When you look at the weak results of a Target and Liz Claiborne and compare them to Cavium, Nvidia, Apple Inc. (NASDAQ: AAPL) and Verizon Communications Inc. (NYSE: VZ) you realize that people would rather stop buying new jeans or kids toys than give up their web-connected mobiles.

This a major social and economic development that has been unfolding slowly over the past two years, but now appears poised to accelerate. Make sure your portfolio is prepared.

Money-center banks, credit card issuers and network-centric techs were among the most impressive players of the week, with the Bank Index (INDXDJX: $BKX) up another 3% in the week despite a mild sell-off on legal developments Friday. Yowza, this is intense! It's bulls' dream come true to get the banks off the mat and in the mix. It's like Elvis and Amelia Earhart reappearing from the dead and striking a pose like they never left -- a combination of crazy wish and impossible dream.

Seriously, a rehabilitated Bank of America Corp. (NYSE: BAC) is just what the doctor ordered. Just look at its chart. It was killed, quartered and left bleeding in the field in September through December while the rest of the market was rallying. Bears thought they this one-time general was toast. But its pact with Fannie Mae (OTC: FNMA) on broken bond deals has pumped it full of adrenaline and opportunistic value investors have applied CPR and mouth-to-mouth.

I mentioned in my 2011 outlooks that BAC could shock the world by regaining $20 this year, and it is on the way. Most of its competitors are trading at a level that would be the equivalent of $35, which would be more than a double from here.

The good news goes deeper than the Fannie Mae deal. Brokerages keep raising their earnings expectations for all banks, which is driving the companies' price/earnings multiple up. Remember that P/E multiples are the hidden levers that make stock prices move higher. For every unit of earnings, a rising P/E means that investors are willing to pay more. And now if the banks actually deliver on those expectations, expect prices to move even more. It can be a virtuous cycle on the way up in 2011-2012 just as it was a vicious cycle on the way down in 2008-2009.

Biggest winners in the financial space this week were not banks, though, but credit card companies such as Capital One Financial Corp. (NYSE: COF), Discovery Financial Services (NYSE: DFS) and American Express Co. (NYSE: AXP), +2.9%. Payment networks Visa Inc. (NYSE: V) and Mastercard Inc. (NYSE: MA) -- which are deeply, incredibly undervalued due to the underserved spanking they took from klutzes in Congress -- were also higher. These should continue to improve in value.

My subscribers are participating in the banking revival in the RiskSeeker portfolio through the SPDR KBW Capital Markets ETF (NYSE: KCE), which focuses on brokerages like State Street Corp. (NYSE: STT), Goldman Sachs Group Inc. (NYSE: GS) Morgan Stanley (NYSE: MS) and The Charles Schwab Corp. (NASDAQ: SCHW), which jumped 4% on Wednesday alone. These should all work back to their 2007 highs over the rest of 2011 as trading volumes rise. 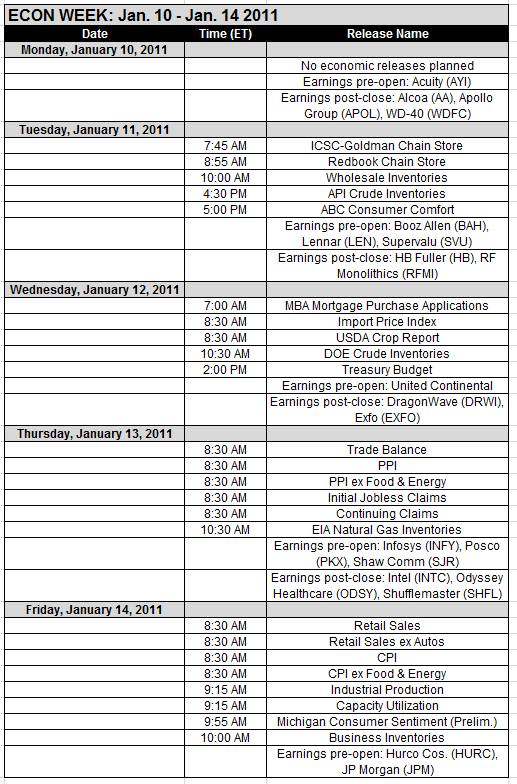 'Mildly oversold technical condition'? Are you serious? The main market indexes are all extremely overbought by historical proportions. The bullish sentiment indicators are off the chart, the likes of which we have not seen for half a century. It's unanimous. The bullish case is so extreme that in the media we're set to go into orbit from here. In case you missed it, the markets have been rallying relentlessly for the last 22 months since the 'credit crunch' bottom in march 2009. Any idiot just needs to look at the charts to see that the prices are at the top right of the screen. Not the bottom right. My 6 year old child can tell me its a top. The technical indicators are all screaming SERIOUSLY OVERBOUGHT right across the board! You can go long from here if you like buddy, but not me, I'm short, short, short!

Why shouldn't the market trade higher? It has been further corrupted by the Fed Reserve's QE2. I am taken aback by Bernanke stating that one of the purposes of QE2 was to boost the stock market. I have seldom heard of anything so crooked in my life! And I am not even one of the bitter shorts.

What does it say about the US economy when the stock market has to be pumped up artificially by Ben Bernanke and the Fed relentlessly printing more and more dollars? As a result of bank bailouts and 'Quantitative Easing', US debt levels are now completely out of control. The only people it serves are the insiders on Wall Street. Doesn't it strike you as a little odd, to say the least, that the US economy is in dire straits, the number of people struggling to buy food is rising, as well as unemployment, while Wall Street cheers as the markets stretch themselves towards another inevitable crash? When this bubble bursts, the aftermath is going to make the 1930's depression look like a Sunday school picnic.