Between 2006 and 2009, the U.S. sold more than $50 billion in weapons systems and related hardware to Middle East nations. In the last decade, the value of annual military contracts in the region has quadrupled.

So while many investors are focused on the roles that Google Inc. (Nasdaq: GOOG) and Twitter played during Egypt's recent turmoil, we immediately zeroed in on all the American-made military hardware that exists in the region - and analyze the risk investors face if the U.S. defense industry bet on the wrong horse in Egypt.

Impact of the "Obama Arms Bazaar" 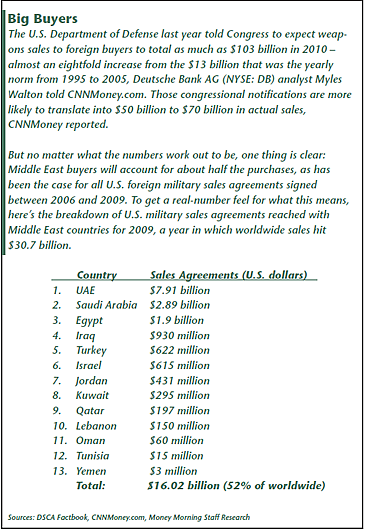 Since U.S. President Barack Obama took office, there's been a major acceleration in the sales of frontline fighter jets, tanks and other U.S.-made hardware and weapons systems being sold overseas. According to the Defense Security Cooperation Agency (DSCA), worldwide sales zoomed from $18 billion in 2006 to $30.7 billion in 2009.

In 2009 and 2010, the U.S. Department of Defense notified Congress that weapons sales to foreign buyers could reach as much as $100 billion - almost an eightfold increase from the $13 billion that was the yearly norm from 1995 to 2005.

As a rule of thumb, those notifications to Congress are more likely to translate into $50 billion to $70 billion in actual sales. And about half of those deals were done with customer countries in the Middle East.

While the biggest buyers are countries such as the United Arab Emirates (UAE) and Saudi Arabia, Egypt accounted for about $2 billion worth of deals in 2009 – including the sale of 24 F-16 "Fighting Falcon" fighter jets.
Egypt is second only to Israel in terms of equipment purchased and equipment and services given as foreign "aid," which is how most of this stuff is sold. Frequently, it's hard to separate the two, especially when the amounts of money are so large.

A case in point: The U.S. forked over $250 million in economic aid to Egypt, while sending 5.2 times that amount, or $1.3 billion, to that country's military in 2010 alone. Similar amounts are requested for this year and 2012.

But here's where this big run-up in foreign military sales starts to get a bit sticky. Many of the Middle East countries now experiencing unrest - including Tunisia, Jordan, Bahrain and even the UAE, to name just a few - are apparently the same nations that the United States has been supplying.

This raises two questions - in my mind, anyway:

The answers may surprise you. The fallout from an ousted regime is not what you might expect. And neither are the risks.

If a regime that's a U.S. defense-industry customer gets overthrown or ousted, the United States doesn't just get to take the hardware and weapons systems back. Instead, the new regime inherits them - much like Iran inherited dozens of the then-frontline F-14 "Tomcat" fighter jets back in 1979, when the Shah was overthrown as part of the Iranian Revolution.

Since the rise of the new Iranian government, headed by Ayatollah Ruhollah Khomeini, our government has spent hundreds of millions of dollars rounding up and destroying repair parts - just to make sure that the now-elderly (but militarily still lethal) Tomcats can't keep flying.

Unfortunately, despots are as inventive as they are opportunistic, which is why Iran reportedly still fields some 20 to 30 F-14 Tomcats that are virtually identical to the "Top Gun" fighter flown until very recently by the best-of-the-best in the U.S. Navy.

Moreover, rumors persist that the remaining Iranian F-14s are now equipped with Russian engines and radar that can keep them flying for even longer. The country is limited on its weapons trading partners these days. And it's looking for anything that will keep its U.S.-bought fighters out of retirement.

[You may feel the same way about your portfolio, lately. But we've discovered a simple "trick" the rich use to grow infinitely richer – legally, quietly and with very little risk (No, it's not gold.). It may even cut your time to retirement in half. To learn about this simple "trick", go here.]

Aside from the security concerns, there are also economic worries. There are roughly 3 million people who work in the U.S. defense sector, according to the U.S. Bureau of Labor Statistics (BLS), which means any regime change "over there" could put the squeeze on our work force right here at home.

As recently as 2007, four of the world's top five defense firms and seven of the top 10 were U.S.-based. And these firms regularly capture more than 50% to 60% of the worldwide off-the-shelf arms sales.

Many analysts argue that overseas contract risks are not all that significant because overseas arms sales typically represent less than 20% of revenue for such firms as Lockheed Martin and Boeing. But analysts who make such arguments are out of touch with major shifts in the industry.

In the 10 years since 2001, U.S. defense spending has more than doubled - to $725 billion for the current fiscal year. That's roughly the defense budgets of every other country on earth, combined.

Now, with budget deficits, the burgeoning national debt and the federal debt ceiling exacerbating existing fears about the nation's long-term viability, a new "need-to-cut" sentiment is going to take hold in Washington.

Lawmakers are loath to cut sensitive entitlement programs - such as Social Security and Medicare/Medicaid - even though they account for about 60% of annual federal spending.
That doesn't leave cut-happy legislators a "target-rich" environment. So they'll go after defense spending, which only accounts for roughly 19% of the budget (if we're talking about DoD spending only), since that's politically much easier to paint with a "bad-guy" brush (an odd irony, since many of those weapons systems actually arm the very "good guys" who protect us).

What to Watch For

As our government has been so rudely reminded during the ongoing financial crisis, unemployment and underemployment can create a vicious circle that stretches far beyond lost wages. So budget cuts at home, combined with regime overthrows that lead to lost sales and lost markets abroad, may have a material impact on the U.S. economic rebound - and on U.S. stock prices.

Not all these companies are U.S.-based, meaning that - in terms of stock prices - some are more vulnerable than others. But they all have U.S. workers. And they will all clearly be watching the events in Egypt very carefully - and looking for possible fallout in other Middle East markets.

Here are some companies that have existing contracts with that country, according to the Department of Defense contract database:

Though relatively peaceful in nature as far as regime changes go, the overthrow of Egypt's longstanding Hosni Mubarak dictatorship is certain to have deep and long-lasting effects on the global defense business, of which the U.S. defense-and-aerospace sector is one of the biggest members.

The regime change in Egypt could also hasten the pace of change in some of the Middle East country's already-unsettled neighbors. And that may be rough for the U.S. defense sector, which counts the Middle East as one of its biggest foreign-sales regions.

The timing for this upheaval couldn't be worse, given that U.S. federal-budget and government-debt problems are certain to push along efforts to cut domestic U.S. defense spending.

In other years, the belt-tightening in Washington would prompt U.S. firms to step up their sales efforts abroad. But additional regime changes overseas could block such efforts, leaving U.S. firms to cut costs - meaning workers - in an attempt to keep lean and fit enough for shareholders to stay happy.

It's obviously too soon to say which defense contractors - if any - will be affected, or by how much. So the best advice to follow is this: If you own any U.S. defense stocks, immediately place very tight "protective stops" to protect your investments.

Investing in defense, or any other sector dependent on government spending is not a good idea right now. But a drop-off in federal funding could cause a chain reaction that ends in the U.S. dollar taking a nosedive. And that will drive up commodities and natural resources prices across the board.

You don't have to sit idly by while basic goods - which include everything from oil to metals to wheat - push prices higher and higher. To learn how you could profit from the coming U.S. government attack on the dollar, click here.

It's either guns or butter. Can't have both. Egypt democracy is about getting rid of USA vampiric Pentagon parasite. Egypt used to receive each year 1,5 billion of aid. To buy food ? No way. To buy military equipment crap from the Pentagon. USA is a parasite, a war mongering parasite.

Roosefeld did worse he supplied the Comunist Diktator wit over 20.000.Planes and enough