The U.S. country index of the Billion Prices Project, a real-time inflation index published by the Massachusetts Institute of Technology, is back after mysteriously disappearing last week.

The BPP tracked online prices of over a half million products sold online in seven nations. OK, so it wasn't a billion prices, but it was certainly large enough to be a representative sample of a broad spectrum of products and services.

The U.S. index had recently become increasingly popular in the economic blogosphere. It was thus a growing source of embarrassment for the Fed because it showed much greater inflation across a wide spectrum of goods and services, generally not impacted by energy prices, than the Fed has been willing to admit to.

The Billion Prices Project was showing much stronger inflation before MIT briefly pulled the plug.

The MIT research team behind the BPP briefly posted an announcement on its website last week that they would no longer publish the BPP country indexes, but would publish a world index in its place. It mentioned that they were working on a deal with a partner to resume publication of the country indexes. The announcement said that the country indexes were just too much work (I'm paraphrasing here), and that the team had more important economic research to tend to. This is like a politician quitting to "spend more time with the family."

On Monday morning, the site was down completely, with only a notice that it would be back soon. Later Monday, the site was restored, with updated data through Sunday. See for yourself at the Billion Prices Project site.

Being the cynical sort that I am, I don't think that the disappearance was coincidence or due purely to the MIT Sloan School of Management needing to get back to its more important research. The data that they were providing was increasingly a thorn in the Fed's side. Suddenly, and with no good reason or significant advance notice, it was gone. Connect the dots.

Before coming back on line, the last chart of the U.S. BPP index was posted on April 13. It reflected an annualized inflation rate of more than 7% over the past three months, and over 4% since the Fed kicked off QE2 last November.

MIT had made a point of emphasizing that the index essentially did not include energy prices, and had relatively little impact from food, since these items are minimally represented online. The data was especially embarrassing to the Fed because just a few months ago the Federal Open Market Committee meeting minutes had memorialized a quote about how difficult it was to understand the mechanisms of inflation in real time. Maybe this little MIT chart made things just a little too easy for the hoi polloi to understand inflation, while the FOMC members couldn't.

MIT stopped updating the chart without warning on April 14 and it sat there quietly on its website for about a week with no updates. Then came the very briefly posted notice that the U.S. index would be going away.

MIT's Alberto Cavallo, one of the economists who developed the BPP, told MarketWatch, "The paranoia about the Fed or the idea that we have been pressured to hide the data are completely unfounded. We are working on a way to continue to produce these indexes. The BPP website will be re-launched soon." 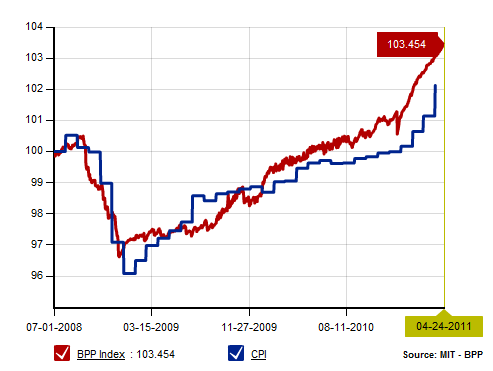 Just two hours after the original version of this report noting the disappearance of the BPP index, the website reappeared just as mysteriously, including the U.S. country index. It showed U.S. inflation raging on, now running at an annualized rate of 8% over the past four months. I'm just hoping that MIT will find the resources to keep the BPP going. Coming from an unbiased, mainstream institution, this is one of the best tools we have to counter the Fed's insistence that inflation is not a problem.

This article originally appeared at Marketwatch.

Stay up to date with the machinations of the Fed, Treasury, Primary Dealers and foreign central banks in the US market, along with regular updates of the US housing market, in the Fed Report in the Professional Edition, Money Liquidity, and Real Estate Package. Try it risk free for 30 days. Don't miss another day. Get the research and analysis you need to understand these critical forces. Be prepared. Stay ahead of the herd. Click this link to subscribe and get access to all current proprietary reports NOW!