Today's retail sales report was far from a reason for the market to party. The media are reporting that on a seasonally adjusted basis, nominal retail sales fell less than expected. An analysis of real retail sales suggests that the underlying trend is weakening, and that contrary to the market's reaction today, the outlook may be less than rosy for stocks.

In order to filter out the effect of sharply higher gas prices and their impact on sales, I looked at the data on a historical basis ex gas prices. According to a breakdown of the retail sales data provided by the Census Bureau, actual, not seasonally manipulated data for nominal retail sales ex gasoline rose by 6.2% on an annual basis. That sounds great, aided no doubt by the weak dollar drawing shoppers to the US from the rest of the world.

However, adjusted for inflation, the gain was only 2.9%. The growth rate fell from 3.4% in April and a peak of 7.6% in November 2010. This 6 month decline in the rate of growth of real retail sales suggests that the stimulus driven recovery is ending. If I am right, the numbers should turn negative in July after the Fed ends QE2. That ship has sailed.

Changes in the annual growth rate of real retail sales excluding gasoline have led the stock market since the mid 1990s. A change in the momentum of retail sales has led stock prices typically by anywhere from a month to a year, although in the 2004-07 cycle, the stock market kept rising in spite of slowing in this indicator throughout the period. At the 2000 market top, the decline in the growth rate of real retail sales preceded the breakdown in the S&P 500 by about 6 months. At the 2009 bottom the reversal in stock prices was nearly simultaneous with the turn in the retail sales momentum indicator, although by the time stocks bottomed in March retail sales momentum had turned up from a higher low, creating what market technicians call a positive divergence. 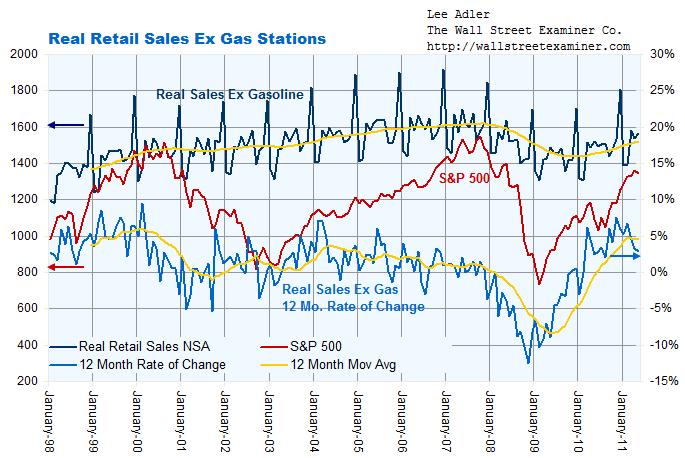 The relationship between the growth rate of retail sales and stock prices is too haphazard to hang your hat on this one indicator, but the break in the growth rate and the formation of a negative divergence versus stocks beginning last December should be taken as an early warning that the uptrend in stocks is now on the time clock. I view the June 2010 low of 2% in the growth rate as a benchmark. A drop below that level may be a signal that stocks are about to enter a major decline. That drop could come as early as July, the month after Fed money printing ends. The ending of government stimulus and Fed propping of the economy will contribute to both declining real retail sales and falling stock prices.

Stay up to date with the machinations of the Fed, Treasury, Primary Dealers and foreign central banks in the US market, along with regular updates of the US housing market, in the Fed Report in the Professional Edition, Money Liquidity, and Real Estate Package. Try it risk free for 30 days. Don't miss another day. Get the research and analysis you need to understand these critical forces. Be prepared. Stay ahead of the herd. Begin your risk free trial NOW!