Major U.S. stocks were under pressure during most of the past week as new worries about Eurozone sovereign debt and a disastrous press conference by U.S. Federal Reserve Chairman Ben Bernanke corroded confidence.

This time, it was not just Greece that was pushing sellers' hot button, but also Italy, as the Mediterranean nation's banks are believed to have excessive exposure to troubled loans in the region. But at the center of the troubles was Bernanke, who looked helpless as an Econ 101 student in a master's class when asked by the media to explain why the economy was not improving as fast as expected.

On the plus side of the ledger this was a stronger-than-forecast increase in U.S. durable goods orders, some very upbeat inflation comments from China, and an improvement in German business confidence.

So where are we now?

Well, my premise at the start of the year was that you would not have to get too fancy to beat the broad market indexes, which are weighed down by troubles at the banks. The idea was you would not even have to get as fancy as picking the right world regions or sectors, like last year. Instead, you could put a large part of your portfolio in something as prosaic as the growth half of the S&P 400 Midcap Index - the iShares Midcap Growth Fund ETF(NYSE: IJK) fund - and let it ride.

That worked for me through mid-May, then it stopped out for a fat gain. Now it looks good to go again, as long as bulls man up and make a stand right here, right now.

I have recommended keeping portfolios a lot lighter than usual during the European sovereign debt crisis, just in case the market - acting as the collective unconscious - is giving us a signal that there is something really wrong on the road ahead.

But if we ever get an all-clear sign in the form of one or two high-volume, high-intensity up days heading into earnings season, investors can go back full tilt boogie on mid-cap growth stocks.

Now mind you, we may never get that all-clear sign. And we may need to recognize that there could be a slide into the fall culminating with an epic wipeout that would lead us to try to buy another fantastic bottom like March 2009.

But for now, let's just be happy that mid-cap growth is still up 7% for the year. Add on 5.5% gain from our high-yield mortgage bond fund positions, like DoubleLine Total Return (MUTF: DBLTX), and you're up 12% in half a year. That's excellent. Now is time to preserve that, and add on. 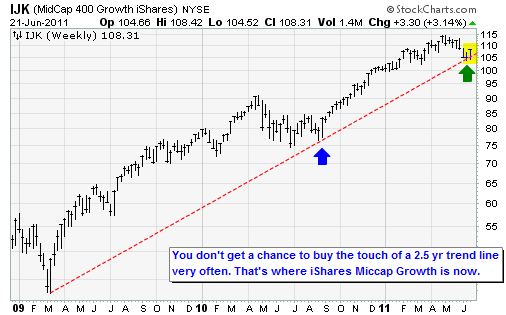 The riskier sector funds are probably going to act more like trading vehicles than long-term investments over the next few months. Active investors will need to prepare to sell at resistance and buy at support until we can get past this rocky stretch and go back to long-term holds.

My strongest hope is if the market is super-choppy through early fall, we will end up with enough winnings set aside that we can buy into a distinct low in October.

Of course, that's easier said than done. But with any luck, we will have the opportunity to get out our canes in the fashion of the great Henry Clews -- the Civil War and Gilded Age era financier who wrote about his experiences in the 1887 classicTwenty Eight Years in Wall Street.

''But few gain sufficient experience in Wall Street to command success until they reach that period of life in which they have one foot in the grave. When this time comes, these old veterans of the Street usually spend long intervals of repose at their comfortable homes, and in times of panic, which recur sometimes oftener than once a year, these old fellows will be seen in Wall Street, hobbling down on their canes to their brokers; offices.

"Then they always buy good stocks to the extent of their bank balances, which they have been permitted to accumulate for just such an emergency. The panic usually rages until enough of these cash purchases of stock is made to afford a big "rake in." When the panic has spent its force, these old fellows, who have been resting judiciously on their oars in expectation of the inevitable event, which usually returns with the regularity of the seasons, quickly realize, deposit their profits with their bankers, or the overplus thereof, after purchasing more real estate that is on the upgrade, for permanent investment, and retire for another season to the quietude of their splendid homes and the bosoms of their happy families."

So now if I say in October "get out the canes" you will know what I am referring to.

The Federal Reserve's statement after its rate-setting committee meeting acknowledged the recent weakening in the economy and in employment but tied them to temporary factors, arguing that the recovery is ''continuing at a moderate pace.''

The key wrinkle that emerged was the notion that the Fed did not intervene last year to help the economyper sebut to stave off deflation. This notion has always been a part of the Fed's communications, but it has not been given the primary role that it is being accorded now.

Bernanke said in his press conference that the Fed only acted last year because the falling rate of inflation last summer suggested that deflation was becoming a serious threat. The subsequent rebound in core inflation suggests that threat has eased, he argued, at least for now.

Strip away the niceties, and here's what you have: He has decided to declare victory and go home.

Paraphrasing again, in my view Bernanke is saying: "QE2 solved the problem of the threat of deflation. Oh, you thought it was supposed to help the economy? You are mistaken." 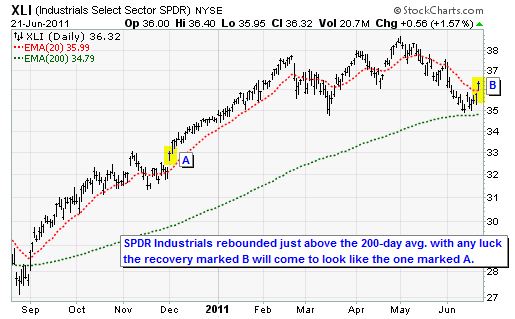 The Fed can deflect blame for the idea that QE2 did not boost the economy by claiming it was not supposed to. This is new, and I do not think it is market-friendly.

The Bottom Line:The Fed is likely to stay on the sidelines the rest of this year. If core inflation is falling next year, and lower government spending means that economic growth will be muted, we can still expect the Fed to loosen rather than tighten monetary policy somehow - most likely with something akin to QE3. In short, don't expect another round of large-scale asset purchases of the type that have supported the market for the past nine months.

It's hard to see how any of this is going to be a positive for stocks, but I would love to be surprised to learn that this scenario has already been discounted.

Monday June 27: Personal income for May; personal consumption expenditures for May; Core PCE price index for May

Interesting title…..from what I gather from the article — stocks will either go up, go down or stay the same. But the reasons 'why' in the article were very interesting…..

Correction to our unemployment situation is long term. It will not be corrected overnight. Job retraining and redirection to health care, education, social programs, new energy initiatives and computer technologies that are more appropriate for our current times will take time to be implemented. The Federal Reserve has the biggest influence in helping the private sector recover, like manufacturing, where businesses are picking up and the outlook is optimistic. It's job, however is not to solve unemployment in a structural unemployment scenario where its tools are of little consequence, doing almost nothing, as witnessed the last nine months.

The economy is growing at a 1.9% rate and according to forecasts by 3.2% next year. That is good. Where is our patience? The U.S. economy is showing underlying strength and it should be stronger next year. A stronger economy means more employment which lessens the unemployment situation.

No matter how much most of us detest Ben Bernanke's quantitative easing programs because they put the U.S. in a deeper and deeper financial hole, we should give credit where credit is due. For now, Federal Reserve Chairman Ben Bernanke can keep his head up because he has been doing a decent job engineering our U.S. economy, even if not by design.

However, it takes courage to take the country into deeper and deeper debt. Is this the right strategy for the Federal Reserve to take in the long run for the U.S.? It should not only look for short term solutions, but seek long lasting ones. This is where many of us part company with Ben Bernanke. He is in the drivers seat and making the calls, and like how former President Harry Truman said, "The buck stops here". It is his ultimate responsibility where to take the U.S. economy, not only now, but down the road for coming decades. He is choosing to take the country down a very dangerous path by his current policies. It is going to be interesting how Ben Bernanke will be viewed by economic historians twenty years from now in evaluating his economic policies. Hope "Helicopter Ben" is not referred to as "Disaster Ben".