Imagine losing 14% of your wealth overnight - doing absolutely nothing at all.

You didn't invest in the wrong stock. Buy the wrong piece of real estate. Or gamble on the wrong outcome.

You just went to sleep...

Sound impossible? It's not. It already happened - in the United Kingdom.

It was 1967, and the U.K. was facing the same pressures that the United States faces now. I'm sure if you told the Brits of that time that they could lose wealth like that - they wouldn't have believed you either.

But then it happened...

No One Likes to Talk about Dying Empires

No one really called the United Kingdom a dying empire at the time. But it was. The U.K. started losing its imperial status in the 1940s.

Before that, the pound had served as the world's reserve currency for 150 years! But after battling two world wars, the Brits lost that privilege to the United States.

It took a little over 20 years, but the British pound finally hit rock bottom.

So the British government decided to "help" the locals by devaluing the British pound 14%. Overnight, the Brits lost 14% of their wealth, with no way to get it back.

That's eerily similar to what the U.S. Federal Reserve is doing to us right now, by keeping the dollar's value depressed with 0% interest rates and quantitative easing.

Of course the pound didn't disappear when the British Empire crumbled. It's still a valid currency today. But you can't convince any central bankers to hold more than a very small percentage of their reserves in pounds. In fact, most hold more Japanese yen than British pounds!

So it will be with the dollar.

The dollar will still be a valid currency. But in 10 years, it's very possible that central bankers will only keep a small reserve in dollars, much like they now do with the pound.

Why shouldn't the dollar go the way of the pound? After all, the U.K. back then was making the same mistakes as we are today.

Why should we think that history will look upon us more favorably? Why should we get a different result when we're doing the exact same things?

Honestly, I believe so strongly in this dollar devaluation that I started preparing for it years ago.

I used to look like most Americans financially. I had credit card debt, car payments, and house payments.

Today, all of my credit cards are paid off. I have an emergency fund. My three cars are all paid off, and my home will be paid off very soon, as well.

Of course, I've also been making strategic currency investments. I have a portion of my savings diversified into stronger currencies to protect the wealth I do have from any dollar devaluation.

Sometimes I feel like Noah building an ark for the economic flood that's surely on the way.

Others may laugh because they don't see it coming. But I know I'll be ready if everything suddenly costs 15%, 20% or even 30% more - if the dollar suddenly drops in value, or if inflation finally catches up with us. 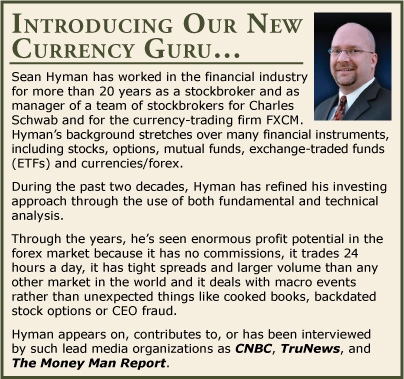 Your Own "Empire Economic Survival Plan"

Start paying down whatever debt you have. Take care of your mortgage. Pay off your cars. Start saving more of your paychecks or investment income each month.

While you're getting your financial house in order, take a good portion of your savings and investments and get them out of dollar-denominated assets.

I'd be changing my dollars into Australian dollars and Canadian dollars at a minimum. These countries don't run their countries the same way we do.

But whatever you do...get at least part of your money out of U.S. dollars! Trust me, it could save you in the long run.

[Bio Note: With the outlook for the dollar and the euro growing increasingly bleak, many readers have asked us about currency trading. So we decided to respond by bringing on a new currency expert - Sean Hyman. Hyman is a veteran currency trader with more than 20 years of experience. He also currently serves as Investment Director for World Currency Watch. Watch for his columns on currency trading in Money Morning.]

So, according to Mr. Hyman's "conventional wisdom", we are supposed to use part of our present income stream (salary, dividends, etc.) to reduce debt owed on assets which are very likely to CONTINUE decreasing in value in the kind of serious inflation expected in the years (and decades?) ahead? How about selling one's precious metals to do so? Sure, that makes a lot of "conventional wisdom" sense. Swap an appreciating asset for a depreciating one.
How about instead, we BORROW all of the $$$ we can, locking in the LONGEST possible terms at today's low rates. INVEST those funds in 90% junk silver, etc., and then expect to sell off whatever of those assets as needed to make the payments on that debt on a monthly basis as programmed?
Another question: Why do they call it "common sense" when it is SO uncommon?

I agree with your reasoning, but why work to eliminate debt. If the future value of the dollar is going to deteriorate, why no use present money to buy income-producing assets, anticipating that the liability incurred will eventually be repaid with devalued money?

Wouldn't savers be punished, while debtors gain in an inflation environment or devaluation? So why pay off your mortgage etc.?

Yes why worry about paying down debt?, I have to question that like george, Ken and Gordon

where's the petition I heard about on the email that Money Morning Chief Investment Strategist Keith Fitz-Gerald isn't just appearing on the Hill to hand-deliver this petition. He's taking it one big step further… …I want to sign it.

As a Brit, I remember it well. The pound was devalued and our Prime Minister said "don't worry, it will not affect the pound in your pocket"!! Well, for those going abroad on holiday, it certainly affected their purchasing power. It made exporting cheaper, but the UK was and still is a net importer – enter inflation!!

Why pay off any fixed interest rate debt early? Banks are the ones that made the bad investments through their mortage lending. If you pay your mortgage off early you are helping the banks and hurting yourself if high inflation is the scenario.

Paul, I know so little about stocks and investments, but I think it's because the banks can raise the interest on our debts, especially in the case of loans without fixed rates. And the banks will do just that in order to survive in the crisis which has already begun. So…if your mortgage payment is now $1500/month, it becomes around $1800 overnight. I think that is what the financial newsletter guys are talking about. In the case of fixed rates, we might all lose our jobs or have to pay so much for groceries and utilities that we couldn't meet our payments on real estate.