Anyone who hoped the U.S. economy would get back on track in 2011 was sorely disappointed.

The European sovereign debt crisis and the abysmal failure of policymakers to take effective action undermined any chance we had at a strong recovery.

And what's even worse is that we're in for more of the same in 2012. Indeed, the U.S. economy in 2012 will be even more sluggish than originally thought - and for the same reasons 2011 was a disappointment.

The Organization for Economic Cooperation and Development (OECD) estimates U.S. growth will slow to 2% next year, down from a 3.1% estimate in May. It forecasts growth will pickup to 2.5% in 2013.

Of course, these forecasts are contingent upon Congress finding a way to stimulate the economy and tighten fiscal policy - not an easy balance to achieve. Without such action, U.S. economic growth next year could be as slim as 0.3%, and only hit 1.3% in 2013.

Unfortunately, after a year of failing to reach a debt reduction agreement, there's little chance the government will rise to the occasion next year - especially when most representatives are focused more on reelection than they are resolution.

Furthermore, it's also doubtful that Europe's debt crisis will be contained enough to not severely disrupt the region's biggest nations and cause a credit crunch that ripples through the global economy.

That means another year of major risks.

"Uncertainty remains the watchword for the U.S. economy," said Money Morning Global Investing Strategist Martin Hutchinson. "The risks are still pretty high because no one's sure what the Europe outcome will be."

The likely outcome - U.S. economic growth will fall even lower.

The OECD earlier this week reported that Europe's weak monetary union is the main threat to the world economy. The group's 34 member nations, including the United States, will grow 1.9% this year 1.6% next, down from the May predictions of 2.3% and 2.8%.

"Contrary to what was expected earlier this year, the global economy is not out of the woods," Chief Economist Pier Carlo Padoan wrote in the OECD Economic Outlook.

"Above all, confidence has dropped sharply as skepticism has grown that euro-area policy makers can deal effectively with the key challenges they face. We are concerned that policy-makers fail to see the urgency of taking decisive action to tackle the real and growing risks to the global economy."

The global growth slowdown has also affected trade. The OECD expects trade to grow just 4.8% in 2012 - a sharp decline from its May estimate of 8.4%.

"The present situation is worse than in 2009," said Padoan. "Trade was the drive of economic growth after the 2008 financial crisis, but now we're seeing risks of protectionism."

To ward off the debt crisis spread, the European Central Bank (ECB) has tried to intervene with bond buying and loans, but its actions so far have failed to deliver long-term repair.

"The real structural problems facing Europe are going to require wholesale lifestyle changes that won't get done in a year or two," said Money Morning Capital Waves Strategist Shah Gilani. "ECB meddling will only serve to extend the problem while they pretend things will sort themselves out."

The smaller Eurozone nations' issues have already spread to the more powerful German economy, evidenced by its disastrous Nov. 23 bond auction where barely half the bonds were sold. As countries teeter on the edge of default and the region's stronger economies start to slow down, the problems will spill into the already debt-ridden United States. Just how bad the crisis will be, however, is unknown - and will remain uncertain until it gets closer.

What we do know is U.S. banks' exposure to Europe's crisis will prevent the United States from being immune next year.

"If the euro area breaks up, the banking system will spasm," said Hutchinson. "This will cause a sharp, though probably brief, recession."

While Europe could deliver the biggest blow to next year's U.S. economic growth, it's not the only risk. 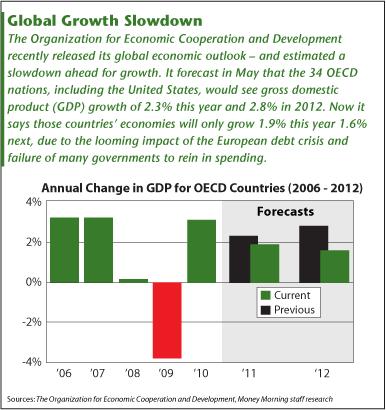 A Big Year for Congress

How the U.S. government decides to manage its debt, and how its austerity measures affect consumers, will be the biggest financial concern for U.S. households, not just next year, but for many years to come.

"This is not just an economic challenge, but potentially the greatest political challenge of all time," said Money Morning Chief Investment Strategist Keith Fitz-Gerald. "It heightens uncertainty because new fiscal challenges are destined to collide with lower potential growth and unfavorable demographics including employment, job creation, and productivity."

The lack of fiscal discipline and the inability of Congress to come up with a deficit reduction plan this year has left the United States with more than $15 trillion in debt. The inappropriately named congressional "super committee" tasked with finding at least $1.2 trillion debt reduction savings over the next decade threw in the towel last month.

While Democrats want a balance of lowered spending and higher taxes, Republicans prefer to reach debt reduction goals only with spending cuts. That's making consumers even more wary to open their wallets, unsure of what combination of spending cuts and tax increases might be coming.

The government needs to rein in spending, but a tighter fiscal policy comes at the price of further limiting the economy's growth. And if Congress does nothing, people will worry about the automatic and arbitrary cuts of $1.2 trillion that will go into effect in January 2013.

"A serious downside risk [next year] is that no action will be agreed to counter strong, pre-programmed fiscal tightening in the U.S.," the OECD wrote. "Much tighter fiscal policy than in the projection could tip the U.S. economy into a recession that monetary policy can do little to prevent."

While fiscal policy boosted economic growth in 2008, it pulled it down by about one percentage point in 2011. Growth could be slowed by one and a half percentage points in 2012 as more stimulus measures expire.

Besides driving America deeper into debt, Congress' continued missteps will beat down consumer confidence. Without the faith of consumers, whose spending fuels 70% of the economy, U.S. growth will again fail to regain footing in 2012.

At the moment, U.S. consumer confidence is getting a seasonal boost. In fact, the Confidence Board on Tuesday reported its confidence index rose to 56 from 40.9 in October - the biggest monthly gain since April 2003, rebounding from October's two-and-a-half year low.

Additionally, strong start to holiday shopping season, along with a seven-month low for jobless benefit applications, is helping 2011 end with a nice pop.

"While hiring may not be improving, at least the rate of layoffs is slowing," Brian Jones, senior U.S. economist at Societe Generale SA (PINK: SCGLY), told Bloomberg. "We have all this good news about Black Friday. I think you will see people move their consumer spending forecasts higher for this quarter."

Still, you shouldn't expect this rally to last. The positive sentiment will be short-lived, and is unlikely to carry into the New Year. After the holiday shopping frenzy settles, U.S. consumers will again limit their spending.

One of the biggest hurdles to improving U.S. consumer confidence is the moribund housing market. Real estate prices fell 3.6% in September from a year before, according to the S&P/Case-Shiller index.

"Housing is nearing the bottom, and will move only gradually," said Hutchinson. "Though I'd still expect prices in late 2012 to be a little lower than now, but possibly with an upward trend."

Unemployment, although slowing, will remain near 9% next year. And inflation will continue to weigh on consumers.

Hutchinson expects inflation to hit 6% to 7% by yearend.

That means consumers will continue to pay off bills and save what they can, a deleveraging process that will further strain economic growth.

Of course, that doesn't mean the best course of action for investors is to sit on the sidelines. There are investments that tend to thrive in this environment.

With the U.S. economy on unsteady footing, gold, silver and commodities are a must-have.

Gold has been trading steadily above $1,700 an ounce as investors anticipate further weakness in global economies and paper currencies. Gold prices are on track to climb above $2,500 an ounce.

Interested investors can buy gold coins and bullion, or they can pick exchange-traded funds (ETF) that follow gold prices.

One we've mentioned before in Money Morning is the SPDR Gold Trust ETF (NYSE: GLD). It's up 22.64% so far this year. You also can try the iShares Gold Trust (NYSEArca: IAU), an exchange-traded fund backed by gold, which has climbed 22.73%.

Another way to profit while U.S. and European economies remain weak is to move into other parts of the world - emerging markets.

Hutchinson likes iShares MSCI South Korea Index Fund (NYSE: EWY). It has a $3.5 billion capitalization and a price/earnings (P/E) ratio of 6.76. It'll also get a boost from a recently signed free-trade agreement with the United States, which is expected to give a 0.6% annual bump to Korea's economic growth.

Hutchinson also recommends Colombia's Ecopetrol SA (NYSE ADR: EC). The Bogota-based oil company is expanding rapidly as a result of Colombia's very attractive offshore and onshore oil deposits. It has a market cap of $84 billion and a P/E of 12.

You can also turn to multinational companies that have expansive global operations.

GLD? I don't think so. The unthinkable happening at MFGlobal doesn't chasten you at all with regard to the trustworthiness of that operation?

HSBC is the Trustee, JPMorgan's partner in crime in the gold market. That's all I need to know.

Not so sure of this