In the coming year, the trajectory for oil prices will be far more linear – and it's pointed up.

There are two key reasons why:

These are the principal reasons oil prices have surged since dipping below $80 a barrel a few months ago. They're also why the world's upper-echelon of energy forecasters has oil prices building a floor above $90 a barrel and rising from there.

Indeed, Goldman Sachs Group Inc. (NYSE: GS) recently recommended that traders buy July 2012 Brent crude futures in anticipation of a rally to $120 a barrel. It was one of the bank's top six trades for 2012 published in its "Global Economics Weekly" report.

"Even in the worst case scenario, the downside to oil prices is unlikely to be anything as severe as during the 2008-2009 cycle," Barclays analysts Roxana Molina and Amrita Sen wrote in a report earlier this year. "As a result, we maintain our price forecast of $115 per barrel for Brent in 2012 and expect $90 per barrel to hold as a sustainable floor even under gloomy macroeconomic conditions."

As for West Texas Intermediate (WTI) crude, which is slightly lighter and "sweeter" than Brent but has been significantly cheaper in the last year, the Energy Information Administration (EIA) expects it to average nearly $94 a barrel next year.

And that's a conservative estimate.

"Given the oil volume constriction oncoming and the continuing increase in global demand – this drives the price, not North America or Western Europe – we will reach $150 or beyond by July 4," said Money Morning Global Energy Strategist Dr. Kent Moors.

Down But Not Out

Of course it's true the global economy will suffer if the European debt crisis is not contained. However, it's also true that emerging market demand will buoy oil prices and eventually push crude beyond the record levels we saw in 2008.

The International Energy Agency (IEA) said in its annual energy outlook that oil demand will rise 14% between 2010 and 2035, from 87 million barrels per day (bpd) in 2010 to 99 million bpd in 2035. And what's more, the net increase in oil demand will come entirely from the transportation sector in emerging economies.

"It is hard to overstate the growing importance of China in global energy markets," says Fatih Birol, chief economist for the IEA. "The country's growing need to import fossil fuels to meet its rising domestic demand will have an increasingly large impact on international markets." 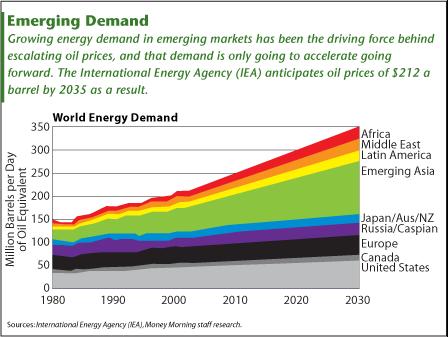 Furthermore, when Japan hit $5,000 of gross domestic product (GDP) per capita, oil demand grew at a 15% annual rate for the next 10 years, according to oil-industry consultant firm PIRA. The same is true of South Korea. However, China reached the $5,000 GDP per capita mark in 2007, and oil demand has only grown at a 7% compounded annual growth rate.

Clearly demand is far more likely to grow than shrink.

"We are going to have a very tight market in 2012," he said. "At the same time, we have low interest rates, which means that by the year 2012 we are [probably] going to see prices above $100 per barrel on average, but very high volatility, because we have a lot of speculative contracts that have been traded in the market right now."

Additionally, the supply side of the oil market is far weaker today than it's been in the past. Even though demand has eased slightly, total supply has fallen as inventories were siphoned off throughout the year.

U.S. commercial oil inventories fell for the third consecutive month recently, declining by 20.3 million barrels. And an 11.8 million-barrel decline in OECD supplies earlier in the year took the inventory level below its five-year average for a third consecutive month, as well. That's the first time that's happened since 2004.
Asia-Pacific inventories are declining, too.

Plus there's a wild card: Political turmoil could easily lead to an oil price spike that eclipses the one we saw last spring during the Libyan rebellion.

And yet, that was simply the result of political upheaval in Libya – which at the time was the world's 17-biggest oil producer. Just imagine the impact on prices if a political crisis arises in one of the major oil-producing nations of the Middle East.

Remember, U.S. President Barack Obama has vowed to pull all U.S. troops out of Iraq by the end of this year. That's almost certainly a relief for Iran, whose nuclear program has already aggravated tensions with the West.

An International Atomic Energy Agency (IAEA) report on Iran a few months ago accused the country of pursuing a nuclear weapons program. This would violate United Nations sanctions and could lead to military intervention from Israel and the United States.

Iran isn't the only political risk in the region, either. Since the Arab spring many Middle East countries have ramped up social spending to dissuade rebellions of their own. Saudi Arabia alone has unveiled some $129 billion in additional expenditures in recent months.

As a result, the Organization of Petroleum Exporting Countries (OPEC) has raised by $10 the estimate it uses in its reference case forecast. It's now up to a range of $85-$95 a barrel. This is the first tacit acknowledgment from the group that the social investment commitments of some key members will necessitate higher oil prices.

"Political unrest is certainly part of why the oil price is getting so supported despite the decline in the macro environment," Sabine Schels, senior director and global commodity strategist, Bank of America Merrill Lynch Global Research, told CNBC. "Iran is flexing its muscles in the region, and we have all seen how strongly Saudi Arabia reacted."

The IEA says "consumers could face a substantial near-term rise in the oil price to $150/barrel," if energy exploration and development in the Middle East falls below $67 billion annually.

The easiest way to play the looming rise in oil prices is through exchange-traded funds (ETFs).

Of course, there's also no shortage of companies poised to outperform the market.

CNOOC is often referred to as the most "Western" of China's oil majors because it was founded with a mandate to form joint ventures with foreign companies. CNOOC is the vessel through which China is acquiring foreign expertise in the energy sector.

The company has already announced it would pay $1.08 billion for a 33% stake in Chesapeake Energy Corp.'s (NYSE: CHK) Eagle Ford shale acreage in Southern Texas, a deal that highlighted China's desire to develop its shale-gas extraction techniques.

If you want a direct play on Canada's oil sands you might look at Suncor Energy Inc. (NYSE: SU).

Suncorboasts strong and reliable crude oil production from its oil sands operations in Canada. It also has refineries, wholly owned pipelines and specialty lubricant products. The company sells gasoline in retail locations in Canada under the Petro-Canada brand and in the United States under the Phillips 66 and Shell brands.

At a time when the many traditional Middle-Eastern oil producers are besieged by civil unrest, reliable oil production from a country as stable as Canada is especially valuable.

"Of the Canadian oil plays, I most like Suncor because of its position as the most important producer of tar sands oil," said Money Morning Global Investment Strategist Martin Hutchinson. "This is only modestly profitable at current oil prices, but if prices run up or a global crisis restricts supplies, Suncor can be expected to increase hugely in profitability."

Anadarko has stakes in some of the most prolific U.S. oil fields in Texas, Colorado, Wyoming, Utah, and Pennsylvania. It's also an international leader in unconventional production, employing methods like horizontal drilling to increase productivity rates from deep wells.

EOG has shifted its focus to horizontal drilling techniques, as well, transforming from a leading gas drilling company to a major oil producer. Last year, the company increased its liquid production by 49%. And it just reported blowout third-quarter earnings, turning last year's loss into a $541 million profit.

And then there's Marathon, which has a firm hold on North Dakota's Bakken oil shale formation – the largest known reserve of light sweet crude in North America.

And finally, there is a small group of oil companies that will be perfectly positioned to take advantage of a short-term "constriction" in the oil markets. This temporary shortfall in production could lead to spiking oil prices and incredible profits for a very special group of stocks. And my colleague Dr. Kent Moors was one of the first (and only) oil industry insiders to figure out this constriction was coming. Take a look right here for Kent's latest special report.