What a decade!… A rapidly urbanizing global population driven by tremendous growth in emerging markets has sent commodities on quite a run over the past 10 years.

In fact, you would find that all 14 commodities are in positive territory if you annualized the returns since 2002.

The best performer was silver with an impressive 20% annualized return.

Surprisingly, that was higher 19% annual return on gold.

However, last year did not seem reflective of the decade-long clamor for commodities.

The remaining commodities listed on our popular Periodic Table of Commodity Returns fell, with losses ranging from nearly 10% for silver to 32% for natural gas. 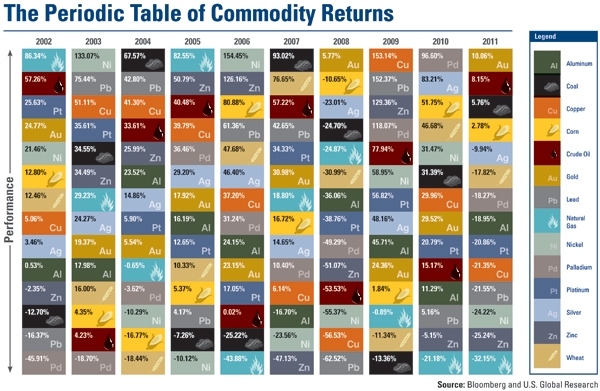 Take natural gas, for example, which posted outstanding increases in 2002 and 2005, but has been a cellar-dweller for the last four years as a result of overabundant supply and softening demand. The industry is also still trying to digest breakthrough technology that has opened the door to vast shale deposits at a much lower cost.

On the other hand, oil finished in the top half of the commodity basket six out of the past 10 years. No stranger to volatile price swings, oil possesses much more attractive fundamentals as we continually see restricted supply coupled with rising demand.

Then there is gold…

After 11 consecutive years of gains, some are questioning whether gold can keep its winning streak alive in 2012. One of those skeptics is CNBC's "Street Signs" co-host Brian Sullivan.

However, during a recent appearance on the show, I explained how I believe the Fear Trade and Love Trade will continue to fortify gold prices at historically high levels.

One reason the Fear Trade will continue is the ever-rising government debt across numerous developed countries.

The situation is quite somber when you consider how much debt Europe, Japan and U.S. owes this year alone, says global macro research provider Greg Weldon.

In his preview of 2012, Weldon says that the maturing principal and interest on U.S. Treasury debt due this year totals just under $3 trillion. Austria, Belgium, France, Germany, Italy, Portugal and Spain together face nearly $2 trillion in principal and interest payments. Japan, is the leader in the clubhouse, owing just over $3 trillion in 2012.

With the combined debt for these developed countries totaling nearly $8 trillion, the interest payments alone dwarf the total gross domestic product (GDP) of many countries in the world. 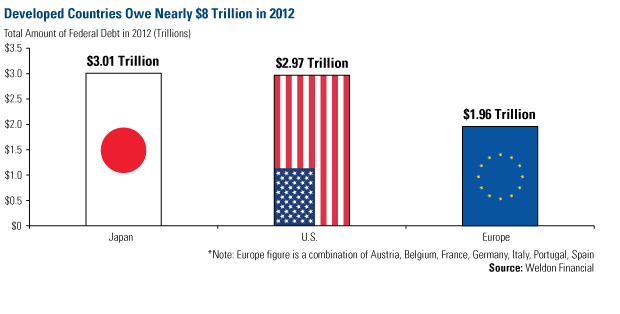 Last week, Germany sold a five-year government note for less than 1%, the lowest interest rate on record. Bids for the low-yielding debt were three times more than the amount sold, even as the consumer price index stands at more than 2% year-over-year.

This means that investors have so few acceptable safe havens they are willing to accept negative real rates of returns.

This is good news for gold as a safe haven alternative against depreciating currencies such as the euro, the yen and the U.S. dollar.

The overwhelming debt burden in developed countries translates to an expected slowdown in imports from the emerging world.

However, the grandest of those, China, likely won't be as affected as much as some people assume. This is "the biggest misconception" about the country's economy, says CLSA's Andy Rothman. Exports only play a supporting role for the Chinese economy. The world's second-largest economy is actually largely driven by domestic consumption from a population more than 1 billion strong with more padding in their wallets.

According to December Chinese trade figures, month-over-month and year-over-year imports of aluminum and copper increased significantly. This may be a result of China restocking ahead of Chinese New Year, but M2 money supply growth rapidly rose in recent months, a sign the government is attempting to reaccelerate the economy.

Also, the urban labor market has been robust over the past two years, with an annual change just below 5%-a record high over the past 15 years. 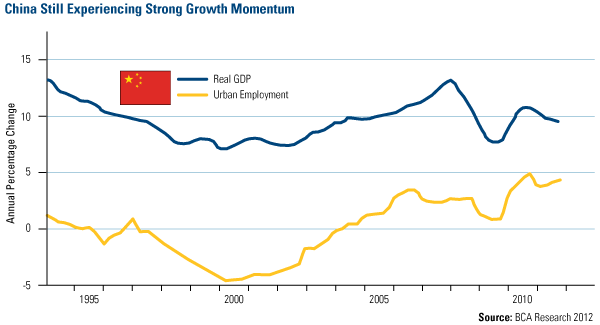 Along with rising urban employment, income growth has been tremendous as well.

CLSA says that last year was "the eleventh consecutive year of 7%-plus real urban income growth," with disposable incomes rising 152% over the past decade.

Investors shouldn't expect China's growth to be as robust as it's been, as the country's fixed asset investment growth drops below the 25% year-over-year pace of the last nine years, says CLSA. China's 12th Five-Year Plan has less infrastructure spending compared to the 11th Five-Year plan. Transport and rail spending is also expected to drop, with only water and environmental protection spending growth rising.

As shown in the BCA chart above, GDP growth has declined below 10%, but the growth is currently not the lowest we've seen in recent years. CLSA believes that China will prevent GDP growth from slipping below 8.5% for the full year, as "Beijing has the fiscal resources and political will to quickly implement a much larger stimulus."

Judging by the record number of articles mentioning a hard landing in China in late 2011, investor sentiment has swung from euphoria to excessive pessimism, according to BCA Research. Last fall, more than 1,000 articles discussed the risk of a "China Crash." 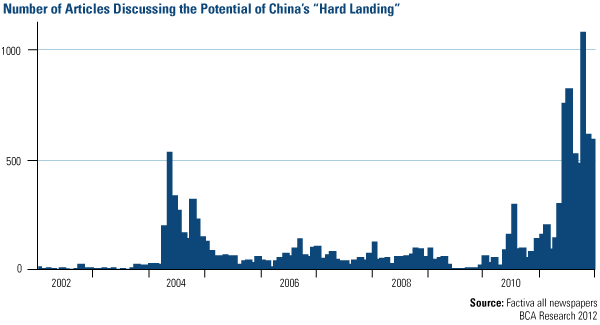 As I've mentioned before, contrarians view extremely bearish sentiment as a potential attractive entry point. BCA believes the pessimism has been priced in, as technical indicators as well as valuations for domestic and investable markets appear "deeply depressed."

What will happen over the next 10 years? I believe the supercycle of growth across emerging markets will continue with rising urbanization and income rates.

This bodes well for commodities, especially copper, coal, oil and gold, and we'll continue to focus on companies that will benefit the most from these much-needed resources.

"The world's second-largest economy is actually largely driven by domestic consumption from a population more than 1 billion strong with more padding in their wallets."

Kidding, right? Chinese consumption-to-GDP averaged 55% through the 1980s. Today it stands at 36%. Chinese consumers won't be supporting much of anything – other than the Chinese economy which will be inflation-riddled again in 2012.

GOLD – Hi guys. I am sitting on about £200,000 of physical gold coins and want your best guesstimate as to what`s going to happen to the price through 2012?
Many thanks
Steve