Mitt Romney is expected to take Nevada by a large margin this weekend - even though he joined fellow candidates in failing to address the staggering number of foreclosures plaguing Nevada's housing market.

But Romney's win would come without the former Massachusetts governor sharing plans for the frightening number of underwater owners in Nevada's housing market.

Housing market issues are especially sensitive to Nevada voters. Nevada is the No. 1 state for foreclosures. In Las Vegas about 70% of mortgages are underwater.

One of Romney's few comments on the state's number of foreclosures was during a meeting with Donald Trump Thursday.

"So many people have their homes underwater, it's extraordinary," said Romney.

While that tactic could work in the Nevada caucuses this weekend, Romney will have to be more vocal with a housing market stance if he ends up running against U.S. President Barack Obama.

President Obama appealed to struggling homeowners this week with a $10 billion plan for mortgage refinancing. The plan would make eligible for the first time families whose homes were underwater.

President Obama proposed to pay for the program with an extra fee on big banks. The refinancing would save homeowners about $3,000 a year that the president said would be reinvested in the U.S. economy.

Romney's strategy of saying little on Nevada's housing market could stem from a comment he made last year.

Romney turned off some Nevada residents when a housing-related comment he made to the Las Vegas Review-Journal editorial board went public.

"As to what to do for the housing industry specifically and are there things that you can do to encourage housing: One is, don't try to stop the foreclosure process. Let it run its course and hit the bottom," said Romney.

President Obama, speaking in Falls Church, VA Feb. 1, argued to continue government intervention in the housing market, and took a shot at Romney.

"It is wrong for anyone to suggest that the only option for struggling, responsible homeowners is to sit and wait for the housing market to hit rock bottom. I refuse to accept that and so do the American people," said the president.

Even though President Obama's current policies have done little to help the Nevada housing market, local politicians claim the state will need government backing to rebound.

"The state of Nevada continues to face the highest foreclosure rate in the nation. President Barack Obama understands this and is taking steps to stabilize the housing market. ," state Sen. Steven Horsford, who is running to represent Nevada's worst foreclosure ZIP code in Congress next year, told the Las Vegas Sun. "The last time Mitt Romney was in Nevada, he had the audacity to say that we should let the foreclosure process "hit the bottom' and that we should do nothing to help struggling families about to lose their homes. Struggling middle-class families need real economic relief, and Mitt Romney hasn't proposed a single new idea to give it to them."

While prices are nearing a bottom, they aren't ready to rebound. It's likely more small declines will persist in 2012 before an upward trend takes hold. 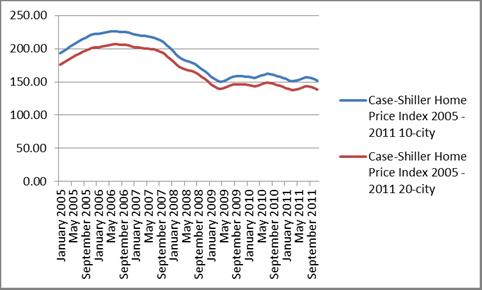 "When people phrase is that way, they say 'we've reached the bottom.' That suggests that we have the expectation of a major turning point right now. But I don't see that," Robert Shiller, Yale professor and one of the economists who created the Case-Shiller Home Price Index, said in an interview with Business Insider editor Henry Blodgett. "I don't see any reason to think that prices are going to start heading up dramatically now."

Strong upward price movements aren't expected for at least another few years. The likeliest outcome is home prices shows sideways price movement for the rest of 2012.

Without a quick housing market recovery in sight, Romney will have to start answering tougher questions about how to handle the nation's foreclosures.

I truly do feel sorry for those who bought into the lies promoted by the housing/banking/mortgage industry that convinced them they would share in the wealth of owning real estate. However, they benefitted from those lies on the way up, so they should bear the burden of their folly on the way down. If you have anyone to blame, it is those who tricked you into thinking that you could make gold out of lead. The bottom of this madness will take years to reach, and then the future will be very different from any reality that you have known up to this point. Give up. There is no longer a housing market as we have known it.