I was on the road lately and had the chance to drop into the Bank of Oklahoma'smain branch in Oklahoma City. Upon entering, it was obvious these were prudent, old-school bankers. No matter the floor I was on, quiet and calm ruled.

Indeed, there are two types of banks in the world: The old-school banks, and the modern, frenzied versions that blew up in 2008.

Obviously, the latter are rightly hated in my opinion. The excessive leveraging of the bubble era has left the world's banks severely weakened. Since 2007, the non-stop deleveraging going on in the global economy has left banks on life support, propped up by their national balance sheets. And the velocity of money has slowed to a crawl.

Yes, in most cases the banks have paid back their TARP funds - but the stigma remains. C), Bank of America Corp. (NYSE: BAC), and Wells Fargo & Co. (NYSE: WFC) all needed bailing out. And both Goldman Sachs Group Inc. (NYSE: GS) and Morgan Stanley (NYSE: MS) had to convert their charters to bank status to hide from the reality of their own numbers.

They blew up. It's that simple. Wall Street failed.

However, not all banks blew up, failed, and needed government aid to keep their doors open.

I've been watching Bank of Oklahoma's parent for a while now, even before my visit inside their building, and they're one of the banks I consider a solid institution.

This is a contrarian bank. They skipped TARP. They didn't need access to the capital, even if markets were locked up. Their dividend rate is still going up and their earnings are growing.

A Dividend You Can Bank On

Bank of Oklahoma was the largest U.S. institution to turn down TARP funds. It was properly capitalized and not at risk of market failure during the 2008 crisis. This goes a long way toward explaining why it has the loyalty it does.

The stock yields 2.5%, which is nice. But what's even better, in my opinion, is that while other banks are cutting their own dividend rates, Bank of Oklahoma is increasing theirs.

Here's a chart of their dividend payments since 2005: 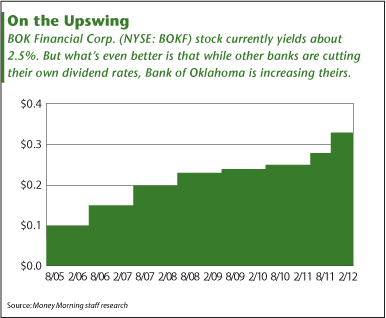 BOK Financial Corp. is also reporting growing earnings. The company reported a profit margin of 22.5% in the trailing 12 months, with an operating margin of 37.7% and diluted earnings per share of $4.17 over the same period.

Furthermore, I believe the current weakness of the stock's price is a great chance for us to pick up exposure.

Action to Take: Buy BOK Financial Corp. (Nasdaq: BOKF) (**) as the market has given us a nice entry into a quality stock.
Let's look to pick up 50% of our position at current market prices. We can then put in a ladder of good-til-cancelled limit orders for the next two legs of 25% each. The first leg should be 5% below where you enter your first position from current prices and the second at the 10% level.

This allows us to get a slice of a quality company that regularly increases its dividend yield. It also allows us to increase our exposure to the stock at better prices if the sector has any near-term weakness.

The company also has an options market available. This would allow us to write covered calls on our shares. If you are willing to risk the stock moving up and away from you, you can sell covered calls and increase the cash yield you get from the position.

About the Writer: Columnist Jack Barnes started his career at Franklin Templeton in 1997. He started out in the company's fund-information department - just as the Asian contagion infected the Asian tiger countries.

Barnes launched his own shop, RIA, in 2003, just as the second Gulf War was breaking out. In early 2006, after logging a one-year return of nearly 83%, Forbes named Barnes the top stock picker in its "Armchair Investors Who Beat the Pros" competition. His two audited hedge funds generated double-digit returns in 2008.

Barnes retired to the beach in the summer of 2009 and continues to write from there. He's now the author of the popular blog, "Confessions of a Macro Contrarian," and his "Buy, Sell or Hold" column appears in Money Morning on Mondays. In his BSH column last week, Barnes analyzed SandRidge Corp. (NYSE: SD).

Very interesting article by Jack Barnes, on (Nasdaq: BOKF) thank you for the information on these old- school bankers. More information on similar Banks would be very welcome, though am I expecting too much.

Wow, you've correctly identified the singular element of redeeming value in Tulsa, Oklahoma…..Tulsa being a town that generally peaked in 1928 and has been on the downhill slide since. Chairman Kaiser unambiguously controls the operation. Some bench strength, but he calls the shots. In my opinion, BOK will continue to perform as you suggest….maybe for lack of vision to do very much else that would be innovative. Good call on possible buying opportunity. Nice post.

I might instead suggest Oklahoma's OTHER (larger) bank holding company, BancFirst (BANF), which is probably even healthier than BOK Financial. This is another bank that did not have to suffer because of TARP, and also increased its dividend this year. And they are not dominated by a crony capitalist like George Kaiser.

Also, you may want to check your facts: BOK Financial's main location and headquarters is in Tulsa, not Oklahoma City.