According to Premier Wen Jiabao on Monday, China is only going to grow at 7.5% this year.

But this isn't the bombshell most Western analysts think it is-even though the markets sold off on the day and may continue their temper tantrum later this week.

It's actually what Premier Wen didn't say that really matters. As is so often the case in China, it's what goes on behind the scene that is far more interesting - and actionable.

In that sense, Premier Wen's comments aren't really news at all, but rather recognition of the symbolic priorities attached to Chinese growth.

As I have talked about at length in the past, China needs to do three things this year: 1) keep growth in line, 2) promote monetary stability and 3) be flexible with regard to inflation.

What makes Wen's 7.5% GDP figure significant is that in dropping it by half a percent, Premier Wen is not saying, but, in fact, telegraphing two things:

Having spent more than 20 years doing business in Asia, I've learned that Chinese leaders almost never say anything in public they haven't already baked into the cake.

This stands in stark contrast to our own politicians who frequently write checks with their mouths that they can't possibly cash.

No. China's leaders are acutely aware of "face" and the risks of losing it. So it's what hasn't been said that's actually far more important here.

The real message is that China expects to maintain growth above 6%, the internal Party Elite's real target, and continue to develop employment opportunities that will keep its 1.3 billion people fed, clothed and housed - so they don't revolt.

Never mind Iran's "Red Line." This is the one that matters.

Understand the importance of 6% and you will understand China in a way that Washington doesn't.

Exports, imports, the yuan, the ghost cities, and hard landings...

None of these things hold a candle to what Beijing considers its most important issue--ensuring China's own survival.

Truth be told, I expect China to easily beat the 7.5% target Premier Wen Jiabao put forth on Monday and grow 8.5% to 9.0% by the time the record books are written.

Admittedly it won't be without some pain, but then again nothing ever is. Lest we forget, our country stood at the edge of the same precipice in 1900.

And despite multiple boom and bust cycles, world wars, assassinations, debt and more, the Dow rose more than 22,000% over the next 100 years.

China will have cycles of its own, but like the U.S. its long-term trend is much higher-not lower.

Why There Won't Be a Chinese Collapse

If there is to be a cost this year to China's GDP, it's actually found in China's $1.7 trillion in local debt.

That's the amount the central government rolled from banks onto local government balance sheets last February as a means of avoiding centralized default.

But don't confuse that with a collapse.

With a staggering $3.2 trillion in reserve, China has put away a tremendous amount of money for a rainy day. China can literally recapitalize its banking system several times over and have change left over.

On the other hand, we owe more than $211 trillion to ourselves according to CBO figures I've examined and which Boston University's Lawrence Kotlikoff has referenced with great fanfare.

We could no more recapitalize our banking system than the man in the moon without cratering it or driving ourselves so far into debt we will never be able to pay it off--which ought to sound uncomfortably familiar.

Despite the dire warnings from noted China apocalypse theoreticians like avowed short seller Jim Chanos, China's property debt remains very conservative compared to the mess in our own system. There's very little if any of the securitization there that we have here.
This means Beijing can lower deposit costs and guarantee a comparatively wider spread between borrowing and lending rates.

It is an option our government doesn't really have in practical terms, though that's what Team Bernanke's Zero Interest Rate Policy is intended to do.

Some suggest this is going to be like an imputed tax that kills growth because Chinese wage earners are going to have to subsidize the results of insolvency by making up the difference via the kind of wealth transfer we've seen here.

I'm not so sure that's the case in China - at least not immediately. 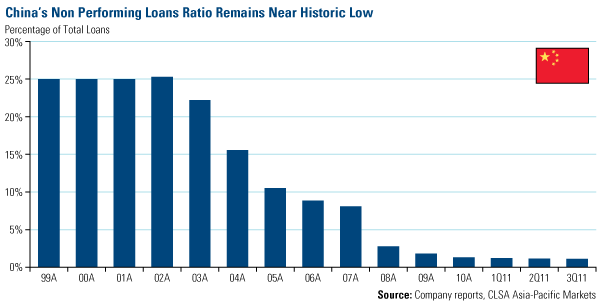 So don't let the $1.7 trillion figure scare you. Chances are it's not the boogey man everybody makes it out to be. China's Non-Performing Loan to loan ratio is under 1%.

What this means, in very practical terms, is that China actually has room for further fiscal and monetary easing. 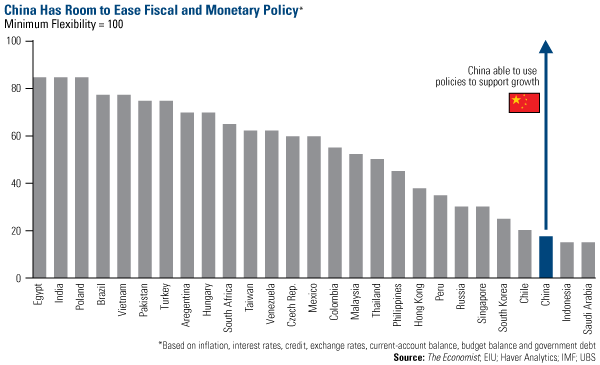 In fact, according to The Economist, which analyzed 27 emerging markets and ranked the countries in terms of inflation, excess credit, real interest rates, currency movements and current-account balances, China has a lot of room to ease if necessary.

An Important Shift in China's Plans

And that's what brings me to the second part of Premier Wen's comments.

While the world's tallest buildings and world's fastest bullet trains get all the news, his commentary suggests Beijing will shift its next Five Year Plan to focus on items that provide higher social returns for ordinary citizens rather than the uber-wealthy minority.

That makes sense given that China's historical growth rate targets have averaged 7-8%, but real growth has been nearly 10%. In 2011, for example, China posted 9.2% GDP growth versus the 8% officially projected.

Also, if you recall that one of China's key objectives is to get its booming property markets under control, a lower official growth figure makes sense because it accommodates the reverse - a drop in property values and deliberate decreases in property sector investments.

Put another way, what Wen Jiabao didn't say but what he implied with his forecast is that Beijing is going to continue to stomp on the brakes this year.

That is something our government wishes were an option instead of throwing $14 trillion into the hole we've dug for ourselves with only a few measly percent in GDP growth to show for it.

And finally, while most analysts want to doom China to failure, the other thing to read into Wen's statement is that China's next government will come to power at the end of this year and enjoy a banner first year in office.

By dropping projected GDP to 7.5%, Prime Minister Wen is essentially giving Beijing's next Party Elite a Sunday pitch he knows they can hit out of the park.

In closing, there are all kinds of reasons you can find not to invest in China, ranging from the same old tired arguments about democracy, capitalism, state spending and more.

But be aware that you risk making the most expensive mistake of them all - falling prey to your own bias.

Top Chinese Plays If You're Just Getting Started

However, if you're able to put your bias aside and consider Premier Wen's unspoken message, here are three ways to invest in China's future.

And, finally, remember that the genie is out of the bottle on this one. China couldn't put it back--- even if it tried.

Important Facts of China against the bias

premier wen jia bao has display the traditional chinese trait of modesty and candor.althought knowing that china is awash with cash while others have a hard time paying even the interests of their loans,he admitted that his country will have a slower growth this year and faced some adjustments.may be its time for the leaders of the so called free worlds like the united states to learn something from her,instead of the usual blamings and lecturings.

It is half beautiful and half scary the way China is taking off. While communism usually paralyzes the economy of countries, those people seem to have a work ethic combined with a spirit of cooperation that is dynamic. Of course they learned a lot from the miracle of Hong Kong. I suppose the only sane reaction is to invest one's money where things are booming.

If you took the brightest minds in the United States and tasked them with planning and running our entire economy do you believe its possible? Central planning lies at the core of China,s real problem.Examine the process of lending in China,cities lend money to new start up companies, imagine going to the mayor of Chicago or New York for start up capital .The chinese market is there for the nimble investor corruption is wide spread accounting rules are woefully lacking.I agree the country presents huge oppurtunities but at what risk?

There are so many U.S. listed Chinese small caps selling for 1x to 4x times reported earnings,
in large and small-cap Value Line, that it is mind boggling. Some think they have learned
their lesson and left losses behind for blues, but I think many of these same stocks will eventually
rise from the dead and prove to be good investments. Singapore's Rogers likes agricultural
stocks, I wonder if he knows of and likes China Green Agriculture on the New York, which was rated
highly by Forbes magazine.

If China ever allowed unions as we do here, their economy would crash. China is flooded with the kind of inhumane sweatshops and work hours that fed America's newborn labor movement. Some of their factories (like Foxconn) have nets to catch their workers as they jump off rooftops to escape their misery. The Chinese currently crush anyone that interferes with their growth plans. Yet we Americans continually buy their tv's and ipads without giving it a thought as long as the picture is clear and the processor is fast enough.

The only thing American unions are good at is shaking down government and corporations. Where oh where is their "Build and Buy American" movement?

I agree with this. The whole globalisation movement is essentially socialist….countries which have benefited most have kept a tight control of their own currencies and labour costs…and trade for that matter…while we in the so called 'free world' were thinking that the collapse of the U.S.S.R and the Berlin wall heralded the victory of capitalism over communism the socialists cleverly took their bid for world domination global through the World Bank , the IMF, the WTO, and the pseudo concepts of 'free trade' that Karl Marx said would bring the middle class to heel….combined with easy money to get the middle into debt the bringing to heel has been achieved…40 plus million on food stamps in America…debt which is unpayable, and the ultimate loss of the worlds reserve currency status tops off the demise of a once great power….such is life.

This will take a huge impact on global economy for the next decades.

does anyone knows what approximitaly the Minimum Flexibility ratio of Ecuador is ????
if you could e-mail me that answer please , I'm planning to immigrate next month , and wishes
to know real facts about this Country !