More experts are saying what most Americans have suspected for years - the real inflation rate is much higher than the government is willing to admit.

Officially, the U.S. Bureau of Labor Statistics (BLS) says the inflation rate, or Consumer Price Index (CPI), for 2011 was 3%.

But a report issued last week by the non-profit group American Institute for Economic Research (AIER) says the U.S. inflation rate for 2011 is far higher - 8%.

Using the government's old methodology from 1980 - before politicians started to monkey with the formula - he calculates the real inflation rate is north of 10%.

Among the few in government who see this as a problem is Republican presidential candidate Rep. Ron Paul, R-TX.

"You know this argument that the prices are going up about 2%, nobody believes it," Paul bluntly told U.S. Federal Reserve Chairman Ben Bernanke during a hearing last week. "People on fixed incomes - they're really hurting, the middle class is really hurting because their inflation rate is very much higher than the government tries to tell them and that's why they lose trust in government."

Changes to the Real Inflation Rate

Over the years, the government has made a series of adjustments to how it calculates the CPI, ostensibly to make it more accurate.

However, critics like Williams say the inflation rate formula has been changed to serve political ends.

"Government data are biased in politically correct directions and increasingly have diverged from common experience and reality since the mid-1980s," Williams says on his Web site, Shadowstats.com.

Changes to the CPI began under the tenure of Fed Chairman Alan Greenspan, who set the stage in the early 1990s by publicly complaining about how the CPI overstated inflation.

By 1999, the CPI had incorporated the idea of "substitution."

Instead of simply measuring how quickly prices were rising, the CPI added consumers' reaction to those price changes to the formula.

Successful bargain hunting means inflation isn't hitting you as hard, the government said, ignoring the impact such adjustments have on a person's standard of living. 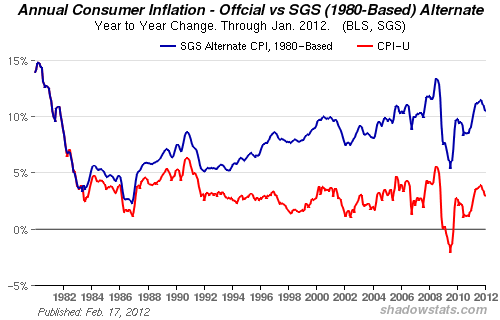 "The old system told you how much you had to increase your income in order to keep buying steak," Williams said. "The new system promised you hamburger, and then dog food, perhaps, after that."

Another adjustment, "hedonics," adds value to goods based on how much better they are than previous versions.

"Now we don't take the real prices of computer chips, for example, but their price deflated by capacity, so every Moore's Law doubling of chip capacity halves the price," explained Money Morning Global Investing Strategist Martin Hutchinson. "Of course, doubling chip capacity doesn't double the functionality, so the whole "hedonic' theory is rubbish."

Or, as Williams puts it: "When gasoline rises 10 cents per gallon because of a federally mandated gasoline additive, the increased gasoline cost does not contribute to inflation. Instead, the 10 cents is eliminated from the CPI because of the offsetting hedonic thrills the consumer gets from breathing cleaner air."

Why Government Lies About the Real Inflation Rate

The government has strong motives for masking the real inflation rate.

Here are at least three:

Although the BLS Web site devotes an entire page to defending its methodology for calculating the inflation rate, Americans see the reality every time they go shopping or pay a bill.

But with the altered CPI serving Washington so well, even pointed criticism from such prominent figures as Rep. Paul is likely to fall on deaf ears.

"Every single day [the dollar] buys less the next day," Paul complained to Bernanke. "To me it's sort of like...a builder had a yardstick that changed its value every single day. I mean, just think of the kind of building we would have."

So, with 10 year interest rates at around 2%, that makes real rates somewhere around minus 8%.

But gold is in a bubble.

The truth is that an 8% rise a year in gold constitutes no change in its purchasing power relative to the clownbuck, so that percentage has to be backed out to calculate gold's real percentage gains or losses.

Once you do that, any talk of a "bubble" becomes even more absurd than it already is.

Inflation is a tool of Governments to create domestic consumption lower to take more revenue from those starved by austerity. The tool used is FUEL. The tax take on Fuel is stoking Hyperinflation ? if you bought it- IT came on a truck— and I defy anyone to name any made, used or manufactured material that does not.

Fuel duty – taxes are destroying everything and unless this is stopped and soon we will have a new war, designed –and I fear it may not be of words.