Is Groupon the next Enron? … No. It's worse.

Before the company even went public, there were signs that internal financial controls weren't up to snuff.

Now I'm hearing refrains of "three blind mice" as "defrauded" investors line up to have their day in court. You might as well say the "dog ate my homework."

It's not like no one knew this was coming.

The U.S. Securities and Exchange Commission (SEC) made management redo Groupon's financial statements and accounting practices not once, but twice before the company's January 2011 initial public offering (IPO).

The first time involved including the cost of marketing in operating income – duh. The second was to force the company to deduct merchant payments from revenues – double duh!

Both are basic accounting principles.

If you spent $2 to gain $1 in orders you have to report that as a $1 loss if you're dealing with cold, hard cash. Also, if you have $1 in merchant payments, you can't count that as $2 in revenues, unless apparently you work at Groupon and love accrual accounting.

It's not like Groupon execs can claim they didn't know.

It's abundantly clear to me that the "company" has very little, if any, understanding of REG FD and securities litigation.

(REG FD, in case you are not familiar with it, is short for Regulation Fair Disclosure which the SEC adopted Aug. 15, 2000. REG FD is intended to eliminate selective disclosure of material non-public information.)

But I have a hunch they're going to find out the hard way.

When the SEC came knocking again on April 2nd the company was forced to restate its Q4 financials. That summarily reduced Groupon's revenue by $14 million and profits – assuming there were any to begin with – by $22.6 million.

In an official statement, Ernst & Young, the company's primary auditor, noted "material weakness" with regard to the company's internal controls. Investors simply noted that they'd better get going while the going was good.

Groupon's share price tumbled 16.87% Monday alone and is down 55% from its peak.

Any other company would be begging major networks for air time to explain themselves. Yet Groupon execs appear to be holed up in their Chicago headquarters either in blithe ignorance of the mess they created or in deliberate avoidance of the tough questions that they would have to answer.

Speaking of tough questions, Milberg, LLP has announced a class action lawsuit on behalf of purchasers of Groupon's common stock between Nov. 4, 2011 and March 30, 2012.

And Johnson & Weaver, LLP, a San Diego-based shareholder rights law firm has announced an investigation into breaches of fiduciary duty by Groupon officers and directors.

This is the legal equivalent of saying you screwed your shareholders, your underwriters and everybody else. Folded into this is the implication that the company lied its asteroids off.

No wonder The Wall Street Journal has reported that there is a growing chorus of cries to write down the company's goodwill. And I'm not talking about the Webster's definition of "hope and intention" either.
I'm talking about the kind of accounting that formed the basis for the huge $166.9 million entry noted on Groupon's 10-k as of December 31, 2011.

Goodwill, in case you are not familiar with that definition, includes things that cannot be easily valued but which are determined by accountants to add to the value of any business over and above its actual financial assets.

If you've got $10 million in stuff like equipment, buildings, and machinery and your company is valued at $100 million because you've got a cool brand, legions of hipster customers, and the Internet is hot, congratulate yourself.

You've got $90 million in goodwill that can't technically be valued but which is theoretically recognized by insiders, and investment bankers anxious to push up the value of an IPO.

As notes my good friend Ziad Abdelnour, President of Blackhawk Partners, Inc. in his book, Economic Warfare, "great wealth rarely comes from speculating and creating nothing."

I agree – yet creating something from nothing describes virtually the entire social media space at the moment, which is why I have repeatedly and very vocally discouraged investors from "buying" in.

Social media stocks are not investments; they are speculation in its purest form. If you've got the stomach for it and want to risk the money, fine. That's your decision.

But don't confuse the promise of real companies with real products, dividends and cash flow with the greater fool theory – as in some greater fool is going to come along and pay you more than you paid at an undetermined point in the future.

Would you pay $10,000-$50,000 for the privilege of having a customer walk through your door, buy one of your products at a loss and leave…on the assumption that he or she might become a customer again in the future?

I sure as hell wouldn't…the Yellow Pages have more staying power.

For business owners with viable going concerns, the Groupon model is fraught with risk because every Groupon coupon out there represents a potential liability that you have to honor the moment it comes waltzing through your front door.

Got a $10 hamburger and a $9 Groupon? Congratulations, you've just "made a $1" not counting your lease, your labor, your taxes, your insurance nor any other expense. 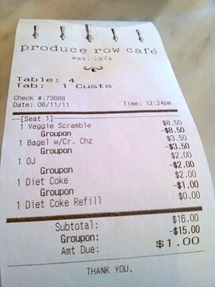 Sell a $20 carwash and a $20 Groupon gets cashed? You've just made $0 and effectively "paid" for your customer's visit. While he got a clean car out of the deal, you got to burn up resources, time and your equipment. Some trade.

Offering a special $10 deal on a $20 pair of sunglasses? You're $10 in the hole the moment you ring the register. Way to go. I hear NASA is hiring.

I've heard that Groupon agreements are very restrictive. The company can apparently run ads from competitors and yet sit on a business' specific "deal" for as long as they like while preventing any business it wants from offering advertisements or competing deals. No comment from Groupon as of press time.

What's ironic is that this business model is equally absurd for Groupon.

The company makes its money on the "float" – that's what they call the difference between when Groupon gets paid and when it has to pay its merchants.

According to Groupon's S-1, the company's "merchant arrangements are generally structured such that we collect cash up front when our customers purchase Groupons and make payments to our merchants at a subsequent date. In North America, we typically pay our merchants in installments within sixty days after the Groupon is sold."

Sixty days…that's how long Groupon can invest, sit on, use or do anything else it pleases with the money before it has to fork it over to the merchants to whom it really belongs at the end of the day.

According to Rakesh Agrawal of TechCrunch, Groupon is nothing more than a "portfolio of loans backed by the receivables of small businesses."

I think that's being generous.

If you're tempted to turn a blind eye, think for a minute about AIG, Lehman, Fannie, Freddie and half a dozen other companies that thought a portfolio of other people's debt was pretty nifty, too. Different industries, I know, but same concept at work here.

Let's say there is a run on the "bank" – in this case Groupon — because a business fails to honor its commitment, or worse, simply fails or a customer wants his money back.

Groupon members will go to Groupon for their money rather than seek recourse from the merchant as would normally be the case.

There is a building volume of angry customers out there doing just that, and a quick search of the Internet turned up refund requests on everything from helicopter rides in Johannesburg to yoga in California.

This will quite literally strangle the company. Angry customers will pressure margins, bleed cash and increase account churn.

That means the $1.12 billion Groupon has socked away in the till according to their most recent 10-k could disappear before management's eyes. Given the way the company has handled their financial matters to date, that may be a moot point.

Why? Groupon reportedly has no way of knowing how many of the coupons it has distributed to users remain uncollected or unused in real time. Many businesses apparently still track redemptions by hand.
Again, no comment from Groupon here.

If you think reconciling your bank statement by hand is an exercise in futility, imagine doing it with $1.6 billion in total revenue spread amongst more than 115 million subscribers, only 20% of which have made an actual purchase from more than 135,247 merchants, according to All Things Digital.

A Marketwatch article by Eric Lefkofsky published one day earlier on Nov. 3, 2011 notes that insiders and early investors have cashed out about $943 million of a $1.12 billion total raised in venture funding.

In other words, insiders cashed "84% of the entire company's venture capital round."

This is not new. In April 2010, Groupon raised $130 million in an earlier round of venture funding of which $10 million went to the company and $120 million to insiders.

See a pattern here? I thought so – me too.

The fact is Groupon went public after several well-publicized accounting problems that management evidently still thinks are no big deal.

Yet the accountants responsible for signing off are back pedaling. Lawsuit rumors are flying. An SEC probe is in the works.

Moral of the story?

Both are selling their stock to you because you hope to get rich.

4189 Reads
The Two Best Penny Stocks to Buy This Week Offer 150% Upside
Here are two of the best penny stocks to buy right now, and the strategies I used to find them. This could be up to 154% potential gain for today's investor...