Last week was a challenging one for gold investors. Gold prices have been on the downside.

Although the yellow metal has been on a spectacular 11-year bull run, recent strength in the economy has some thinking gold's heyday is over.

As I often say, investing, like life, is about managing expectations-even throughout gold's decade-long rise, price action over the short term can go both ways.

It helps to look at what happens after short-term drops.

For example, looking at the past decade of one-day 5% declines in gold, you can see that this event is pretty rare.

Another one occurred at the end of this February. Take a look:

The Seasonality of Gold Prices

The 1.7% drop experienced over the past month shouldn't surprise gold investors given the seasonal pattern for gold.

Whereas gold rises nearly 2% in both January and February, over the past 11 years, it's been a non-event for gold to correct in March. 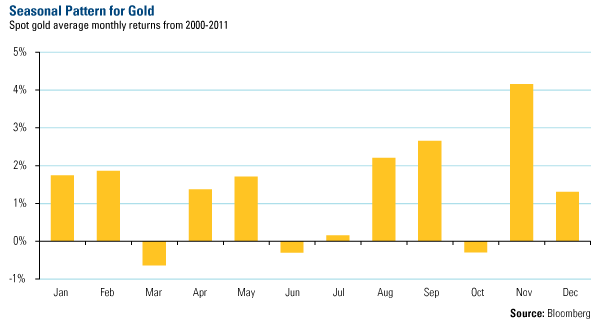 This March, there seemed to be one main driver eight thousand miles away negatively affecting gold prices.

I often say that government policy is a precursor to change, and fiscal policy strongly affected the Love Trade in India last month.

To trim its current account deficit, India's finance minister proposed doubling the customs tax on the precious metal. It was soon reported that jewelers closed shops in protest.

As a result, gold imports into the world's largest gold market fell 55%.
It's not the customs tax that has the gold shops boycotting, says UBS Investment Research firm. Jewelers' "prime gripe is with the new 1 percent excise duty on unbranded jewelry" leading to a greater recording of gold transactions, which means more regulation and red tape.

What's so egregious to jewelers is the excise tax will be retroactive so those shop owners holding old gold stocks will have to pay duty on those as well, says UBS.

I believe this is only a temporary sell-off for India.
As I often discuss in my presentations, traditional festivals and holidays drive gold demand in India because of their strong history with gold.

With their love for the yellow metal, Indians hold the belief that gold "will perpetually rise," although there are certain buyers that wait for a "psychologically important $1,600 level," keeping in mind the strength of the rupee, says UBS.

While the seasonal Love Trade period for gold generally falls between August and February, an important holiday is coming up which has historically driven higher sales of gold. Akshaya Tritiya festival occurs on April 24 this year.

This is an important occasion for Hindus, celebrated annually in late April or early May, depending on the Hindu calendar. Buying and wearing of gold jewelry is important on this day, as UBS says it's one of the two "biggest gold buying events" in the Hindu calendar. The second event is Dhanteras, which occurs during the peak seasonality period for the yellow metal.

How important is this festival for the gold market?

UBS analyzed the buying data from India last year when Indians celebrated Akshaya Tritiya festival on May 6. It found that "physical sales to India peaked four days beforehand." Also, "sales were consistently above average for 13 working days" before the festival because local banks and jewelers restocked their inventory.

Two factors need to change to help sales in India this year, warns UBS. The firm says the jewelers' strike needs to end, and, according to one local who talked with UBS, it would help gold sales if the price of oil would reverse-this would "relieve some of the current account pressure and perhaps allow for more flexibility with regard to gold imports."

What won't change over the long-term is Indians' gold-buying behavior: Indians "have an extensive cultural tie to gold" and this "is not changing," says UBS.

The world has been experiencing the largest liquidity boom, as the central banks' seven-month easing binge continues.

Over this time, ISI counted 127 different stimulative policies, such as printing money, lowering interest rates and other easing measures, taken by governments around the world.

The policy shifts helped carry the equity market a long way from the low on March 9, 2009. At the time, we noted in a special Investor Alert that there were significant government policy changes that signaled the market had hit rock bottom.

According to USA Today, from the 2009 bottom through the end of the first quarter, the S&P 500 Index increased more than 100 percent. No wonder U.S. equity investors are singing.

However, the side effect of the abundance of printing by the central banks in the U.S., Europe, Japan and England has bloated balance sheets amounting to nearly $9 trillion.

This is double the amount that it was three and a half years ago, says Ian McAvity in his recent Deliberations on World Markets, as the printing presses have pumped our monetary system full of liquidity. This is merely "kicking the can down the road," as central banks will have to deal with the overhang later, says Ian.

This has historically been a strong positive catalyst for gold.

An analyst at the Economics and Finance Fanatic blog put together a visual that illustrates just how strong of a catalyst the nonstop printing of money is.

The chart compares the U.S. adjusted monetary base since 1990 with the "surging" price of gold. As you can see below, the amount of money in the U.S. system climbed to extraordinary heights since 2008, with gold following the same path. 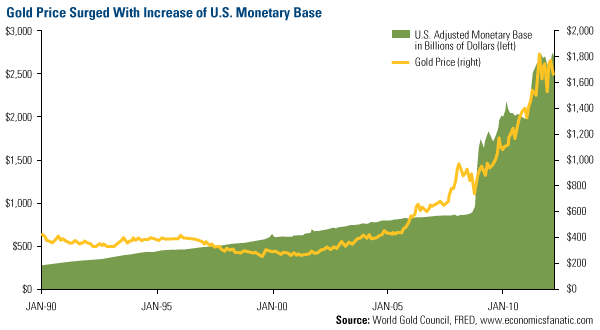 The economic challenges of the U.S. and Eurozone "promise to be a prolonged one with sluggish economic growth," says the blog, and easy monetary policies will likely be the remedy for awhile.

I believe this provides a strong case that any pullback in the gold price appears to be a buying opportunity.

Ian says, "Tax uncertainty, festering toxic debt that's out there but out of sight and impossible debt service ability looming? I'll stick with gold and sleep better at night."

U.S. investors might sleep better at night with an allocation to gold in the face of continued negative real interest rates. The chart below shows how gold has historically climbed when interest rates fell below zero percent, with a "strong correlation from 1977-84, and again recently when rates turned negative in early 2008," according to Desjardins Capital Markets.

The U.S. has not made any cuts in entitlements which make up 60% of the deficit. There have been no changes in fiscal policy and no change in current monetary policy. Ian McAvity says these factors together make "the most powerful argument in favor of converting that paper into gold."

What would have to change to make me turn bearish?

I believe the following three actions would need to be taken:

I believe there is a low probability of these events occurring any time soon. In this environment, gold should thrive.

Update: Jewelers and bullion traders in India called off their strike on Friday after India's finance minister said that the government would address the concern of the duty on gold jewelry. This is just in time for Indians to purchase gold ahead of the Akshaya Tritiya festival, but the boycotting may arise again as the levy proposal will be up for consideration in parliament in early May.

I think you feel it too well. Note that the chart represents seasonal patterns; as such one year would not suffice. The time frame is therefore accurate.

I'm still holding G/S as I believe and am optomistic that it well come back in june or in these two last quarters.With Hong Kong now having their ability to sell G/S they should see increases in purchases from many nations and or large buyers.
Not with standing the down turn in ecomony many are holding the Dollar close to the vest for now.Many are not making big purchases either .EX.[keeping their cars and fixing them up]So until G/S bottoms out I think it's anyones guess when or how much time it well take for Gold/Silver to come back.But it's still the best investment abouve stocks etc. So I stand with my bet it well be back on top by year ending.
Sincerely Burton Sweet
PS I do appreciate all the information you provide us with.Thankyou….