This weekend I was strolling by JPMorgan Chase's (NYSE: JPM) Park Avenue office building in Manhattan.

It was 11:40 am, and I was returning from a long walk from my midtown hotel down to Chelsea (it was definitely "a Chelsea morning" in NYC… thank you Joni Mitchell).

I hadn't planned to walk by their office building; I didn't even know where it was.

But there I was, rounding 48th Street on Park Avenue, when I saw the JPM sign. I thought, how ironic, I'm in New York, appearing on FOX News to talk about the debacle at JPM, and here I am serendipitously walking by their office building.

There was no one on the street, which is pretty unusual for New York. I was looking at the barricades in front of the building and imagining that they must have needed them on Friday, when the press and public must have been surrounding the building on news that the bank had just admitted losing $2 billion (actually it's $2.3 billion and counting) on a hedge position.

And how ironic; he's been publically deriding the Volcker Rule as being stupid and unnecessary, and now he's the tempest in the teapot (which is what he called rumors about his London office's rumored losses)…

When who else should get out of a shiny GMC chauffeured "black car" but Jamie Dimon. 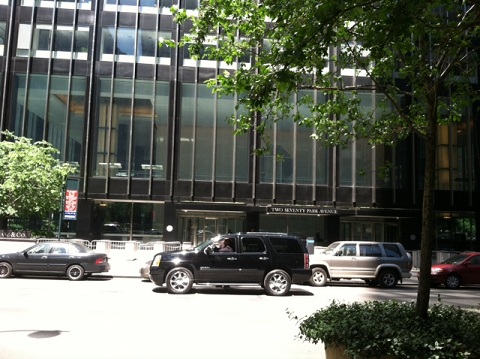 Caption: Amazing freaky impossible as it was, I as just standing outside JPMorgan on Park yesterday, when out of his chauffeured black GMC ride steps Jamie Dimon in an untucked polo shirt and tennis shoes. I smiled at him and thought, "What are the chances of that happening?"

We were the only two people on the sidewalk, so needless to say, we made eye contact. I smiled at him and was so tempted to ask him sarcastically, "Jamie, why the long face?" But, of course, I didn't. I simply smiled at him, and he looked through me, as if I wasn't there, or was someone from the press who he wanted to make disappear.

I was really struck by this chance encounter. And I thought, what are the chances of that happening?

Then it hit me. Chances were pretty good. After all, where else would he be on this Saturday but going into the office to deal with the mess his bank was in?

And that's when it really hit me. What were the chances that his bank would have lost more than $2 billion (and counting, did I say that earlier?) on a "hedge" position?

Oh, the irony of it all. Chances aren't always just chances. Sometimes they are meant to be… because some things aren't by chance; some things actually are what they are.

So, am I surprised that Jamie's little bank lost $2.3 billion (and counting, did I say that?) on a hedge position? NO. It's hubris come home to roost. Pride before the fall… and all that.

Here's what you don't know.

(And am I guessing here? Yes, but, not really guessing guessing. I kind of know, because I've kind of been there and done that. No, I've never lost $2 billion, or even $1 billion. But I did run the hedging operations for one of Britain's largest banks… many moons ago. So, I know a little about what goes on at big banks.)

Trust me – that's probably what the head trader told the risk department at JPM when he put on the Big Trade – the hedge position that the bank put on wasn't a hedge at all.

It was a bet designed to make money that was designed to look like a hedge. Which only was ever going to be called a "hedge" if they lost money on it.

Otherwise, no one would have noticed that they made a ton of money on the position. It would have been buried in their financials as some income thing from something that was what they do that makes them oh so good at what they do. Did I say hubris?

The idiots at the bank wanted to hedge against European credit exposure that they had.

They are idiots because the money that's shepherded by the Chief Investment Office (some $379 billion, yeah, that number is right) is money that the bank has and hasn't lent out, or technically is "available" to play with.

And instead of parking it in U.S. government bonds (Citi has $293 billion of the same float and has 87% of it parked in "governments"), they parked a lot of it in Europe's crappy credit markets.

Something about looking to pick up some yield, they'll eventually come out and say. No, never mind, they'll never admit that.

So, they get nervous and tell the CIO to hedge their European credit exposure.

That's not stupid. What is stupid is that they put on a giant trade in an illiquid part of the markets (derivative spreads… it will come out, I'm sure. They were playing the spread between junkie credits and good credits) with, guess who? Hedge funds and a few banks.

Why is that stupid? Because here's how trading really works.

If I know your position, and you have a huge position on, and I'm on the other side of it along with a bunch of my friends (after all, we're all friends trying to make money on Muppets, and this time the bank itself was the Muppet puppet), I'm going to do what I have to do to get you to cry "uncle."

I'm going to mess with your position.

I know what it is. I know it's illiquid. I know I'm not going to let you out of it, because I'm on the other side of it and no one else wants to take your stupid, illiquid position off your hands.

Are you starting to get it?

The London Whale, Bruno Iksil, the head trader on this beauty of a trade, got into a position that he couldn't get out of, and the boys on the other end played him like a patsy.

I've done that before. It's fun… and very profitable.

JPM ain't done losing money on this trade. I'm guessing that it's going to cost them another billion or two to unwind this gem, maybe three. I am so laughing and so jealous that I'm not on the other side of their stupid trade.

This whole thing, the whole "chance" thing doesn't have anything to do with chance. Things happen for a reason.

As far as JPM losing a few billion, it's nickel and dime in the big picture of their earnings clout. Actually, I think the stock is close to a "buy" here. I'm thinking about taking on some JPM stock and adding to it, as it might drop another 10% to 20%.

Shah Gilani boasts a financial pedigree unlike any other. He ran his first hedge fund in 1982 from his seat on the floor of the Chicago Board Options Exchange. When options on the Standard & Poor's 100 began trading on March 11, 1983, Shah worked in "the pit" as a market maker.

He helped develop what has become known as the Volatility Index (VIX) - to this day one of the most widely used indicators worldwide. After leaving Chicago to run the futures and options division of the British banking giant Lloyd's TSB, Shah moved up to Roosevelt & Cross Inc., an old-line New York boutique firm. There he originated and ran a packaged fixed-income trading desk and established that company's "listed" and OTC trading desks.

On top of the free newsletter, as editor of The 10X Trader, Money Map Report and Straight Line Profits, Shah presents his legion of subscribers with the chance to earn ten times their money on trade after trade using a little-known strategy.

Shah is a frequent guest on CNBC, Forbes, and MarketWatch, and you can catch him every week on FOX Business' "Varney & Co."

Before Jamie sold bk one, when president, don't you remember his large position in derivitives and his losses – it's easy to forget and put the finger on someone else? Would appreciate your response.

It was about 6 years ago my wife and I each opened special senior citizen checking account at what was then Washington Mutual and we have maintained them right through the time of the Washington Mutual-JPM Chase Bank merger to this day. The Social Security Administration sends us our pensions via electronic check transfer and we just want to know: are our accounts are going to be safe in spite of Chase's massive $2Billion (and counting) loss? I am 69 going on 70 and my wife is 76 going on 77 and we both have major health issues and with… Read more »