When you've been working the markets as long as I have, you learn that the biggest dangers are always found in a place just over the horizon.

It's why I spend my time hunting for stories, news items and opinions that in the old days were considered far "below the fold."

Invariably, what I am looking for is the stuff that everybody else has missed.

Because I believe that's where the real information is -- especially when it comes to uncovering profitable opportunities others don't yet see or understand.

It's the story behind the story that interests me. To find it, you need to go beyond the headline news.

In that spirit, here's my take on five things that I'm thinking about right now.

5 "Over the Horizon" Investment Stories

An S-1 is a document filed with the SEC in conjunction with an upcoming Initial Public Offering (IPO). It's intended to give prospective investors an understanding of the basic business and financial information needed to consider the merits of an offering.

Facebook has now revised its documents six times since February 1, 2012.

This time around, Team Zuckerberg is admitting that - gasp - it's difficult to monetize users who are migrating to mobile devices and that the company has to spend more money to attract them. The company also commented that the number of average daily users is rising far more rapidly than the number of ad units being displayed to those users - and that average revenue per user will decline.

My Take: No question Facebook has changed the planet, but don't forget that the executives, venture capitalists and underwriters are the ones who make out on IPOs. These comments reinforce all the reasons why I suggest investors pass on the Facebook IPO. Speculators...that's a different matter, but don't confuse the two for three reasons: 1) Revenue growth is slowing; 2) Facebook does not dominate mobile devices and won't likely do so; 3) Startups are already cannibalizing Facebook's user base.

The seven largest U.S. phone companies reported in Q1 that 52,000 subscribers hung up on their long-term contracts. This is significant considering these companies represent 95% of the US market and account for 220 million devices according to the Associated Press.

My Take: Contract plans are the big earners and the Achilles' heel. As customers shift to cheaper, no-contract plans, watch revenues drop and phone companies shift to non-phone devices like security and data sharing. Apple is particularly at risk because the phone companies have subsidized sales and now face extinction-level events thanks to the very devices - iPads and iPhones - that changed the game. While I'd love to short "em, I am reluctant to play against the Fed and central banks at the moment (for reasons I'll get to next).

3. The Markets remain addicted to QE

Speaking of which...I've written and talked about this for several years in publications and at presentations worldwide but very few people have put two and two (trillion) together. 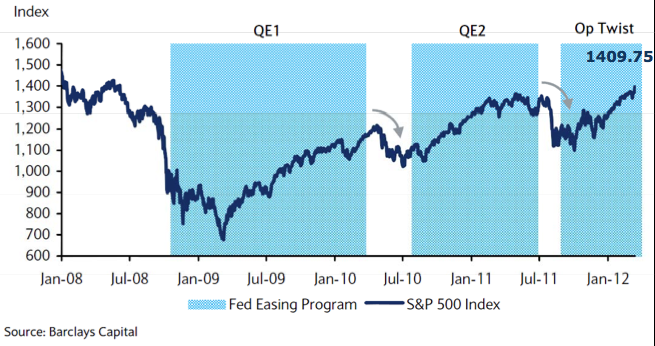 My Take: QE is wrong on so many levels and robs economies of the very vitality they desperately need at the moment. Yet, our markets are addicted to cheap money. Without QE the markets drop, so the government-- which desperately needs growth to shed the toxic assets it has absorbed as part of the bailout process -- will continue to throw everything, including the kitchen sink, into this mess. Sadly, the responsible thing to do right now would be to take a deep breath, hold our noses and let everything reset. Unfortunately, our "leaders" will never allow that to happen.

4. Why we're turning Japanese ... and why Bernanke will hold rates lower even longer

Since 1948, there hasn't been another recession/economic deterioration anywhere close to the scale of what we are dealing with now, either in terms of depth or the length of time it will take to dig out. On an economic scale, that's just pabulum. But in human terms, the cost is very real and very devastating.

My Take: Low job creation and an even lower job participation rate create a Fed that's scared of its own shadow. Every 1% rise in interest rates is an additional $150 billion in interest payments to U.S. bondholders. Total debt including household, corporate and government obligations is already 279% of GDP. This is Japan's problem, only their total indebtedness is 512% of GDP. Today, Japan can't raise rates and avoid financial suicide...and we are rapidly approaching the same point of no return with each new, misguided stimulative effort. We are turning Japanese - a suggestion that I initially voiced in late 1999 to open scorn, derision and outright ridicule. Nobody's laughing now--including me.

5. What it takes to grow through a downturn

I hear it all the time...investors are desperately trying to convince themselves that there's no growth to be had and, therefore, there are no investments worth making.

My Take: This is a total copout. If you look at earnings, many of the world's best companies have not only pulled farther ahead during the financial crisis, but many continue to grow despite the fact that the world appears ready to go off a cliff.

I know the bar is low and I understand that CEOs are managing expectations, growth is slowing, etc.

But would you rather place your bet with a bunch of politicians who have no clue how real money works or a bunch of CEOs who have navigated international waters for decades?

Excluding the banks, I'm with the CEOs any day.

There are obviously a lot of variables when you look under the hood but generally speaking the kinds of companies that interest me have four things in common:

Anyway, that's today's missive in terms of what I see when I look over the horizon.

Now where did I put my French dictionary?

I am pretty sure I heard Germany's Chancellor Merkel say "merde" when Francois Hollande got elected...

Morgan Stanley, a lead in the Facebook IPO, issued yet another prospectus (revision) this Wed. morning for the upcoming IPO. In it they disclosed even more shares (25% more) available for sale, as more insiders want out. For example, Goldman Sacks is going to sell 50% of their position while another hedge fund wants to SELL a similar amount of their total shares. The institutions want out and at a still higher price ($38/share).

Never to miss out on a big deal, the individual retail investors are literally 'falling over each other' to get in this IPO, if possible. Never mind the company fundamentals, they want to own their favorite social web site. (Hardly anyone reads a prospectus anyway). Well, that's Democracy.

Myself, I must agree with Keith. If the general investing public wants all-in, then maybe this is the peak for Facebook for a long while, possibly forever. The company could find the magic code to enable it to place targeted ads on every mobile device on the planet. Similarly, you could win the lottery or the black jack game in Las Vegas. The mule might learn to talk too. You just never know for sure. That's the allure of Facebook (Hope).

THE LAST DAYS OF POMPEII??

Regarding QE 1&2, I put "two and two" together LAST year. If so few were able to do so, then I must conclude the general public is really SLOW (witted, that is). So, will Facebook's stock performance THIS year be fabulous if we get the anticipated QE 3 or a flop, as predicted by Shah and yourself?

Seeing the markets under the control of the FED and their latest market intervention does not make me feel warm and fuzzy all over. It adds another level of speculation and manipulation to most everything. Frankly, I don't know what to expect but "feel" it won't end well when the FED finally runs out of silver bullets. Until then we pretend, and extend. Is it like the "Last Days of Pompeii"??

Yeah food and water (and gas) stocks…the same ones that are creating inflationary nightmares across the nation. Invest in them if you can look in the mirror. They may be the last to go down with the titanic, but down they will go.

Sometimes movie directors, even good ones like Clint Eastwood, have to reshoot a scene to get it just right. Same thing goes for other things like stocks, IPO's, and wineries. RE: Facebook

The long term bet is that Facebook's 28 year old CEO and founder Mark Zukerberg will prevail in his quest to expand markets globally and in the developed markets such as Europe and North America. So, the bet for investors/speculators in the next 5-10 years is he will be successful in growing ad revenue and viewers BEFORE his seed money from this IPO is largely consumed. Monetizing 900 million existng viewers is now his personal and professional Quest (mission).

Not all established businesses can make profitable use of their IPO windfall. Lets look at a vernerable old winery, Robert Mandavi in Oakville, CA. (Napa Valley). Mandavi had a huge IPO in the go-go nineties. Some of the money went into capacity and production improvements at his winery. A large some of money was wasted in an expensive premium winery across the street: Opus One ( Another Rothschild Family play thing). Still Laugh'in?

However, other IPO $$ went to private limos, chauffeurs and "other perks". Robert Mondavi's sons apparently had expensive tastes. In the end, they burned-up all their seed money from the IPO, got into trouble financially and were forced to sell the family business to a Constellation Brands (a large conglomerate). They cashed-out. Easy come, easy go. No one is immune from folly.

excellent article Keith.also worth noting is the 60 some thing years since we (USA) had 2 wars going at 1 time.I think we are going to have to wait until both conflicts are resolved .then and only then will we see true prosperity restored .and I don't believe it matters who's in charge.