If President Barack Obama is pinning his Election 2012 hopes on better U.S. jobs reports in the months between now and November, he may want to get started on updating his resume.

The president's re-election bid took a blow on Friday when the U.S. Department of Labor reported the U.S. economy added just 80,000 jobs in June. That was far below analyst expectations of 100,000-125,000, and well short of the 125,000 needed to keep pace with population growth.

The disappointing U.S. jobs report came on the heels of other bad economic news, including a contraction in manufacturing activity and a decline in household spending.

"We had confirmation of what all of the other economic indicators have been signaling for some time, and that is a marked deceleration of the U.S. economy," Paul O'Keefe, director of economic research for the consulting firm J.H. Cohn and a former Labor Department official, told The Wall Street Journal. "This is not an outlier month. We've seen a deceleration in job growth since the beginning of the year."

While the headline unemployment rate held steady at 8.2%, the numbers are clearly going in the wrong direction. The Labor Department said 155,000 people joined the workforce in June -- almost double the number of jobs added.

An analysis by Hamilton Place Strategies calculated that the economy would need to add 219,000 jobs per month to get unemployment below 8% by Nov. 6.

Businesses simply have too many concerns:

Promises Come Back to Haunt Election 2012

It's easy to see how unemployment could remain stuck at 8.2% or higher for the rest of 2012.

Historically, unemployment over 7% has made it very tough for incumbent presidents to get re-elected. Only two presidents have done it in the past 75 years: Franklin Roosevelt and Ronald Reagan. 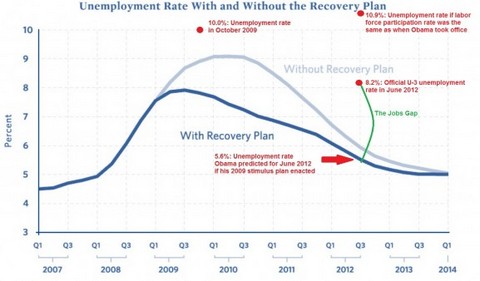 Those numbers appear in a document called "The Job Impact of the American Recovery and Reinvestment Plan." It was written by the Obama administration transition team to sell Congress on the passage of the $787 billion American Reinvestment and Recovery Act (ARRA) in January 2009.

"Certain industries, such as construction and manufacturing, are likely to experience particularly strong job growth under a recovery package that includes an emphasis on infrastructure, energy, and school repair," the report said.

But a chart comparing jobless rate projections both with and without the stimulus shows just how over optimistic those promises were.

For example, the stimulus was supposed to prevent unemployment from going to 9%. Yet it peaked at 10% in October 2009.

ARRA was also supposed drop the U.S. jobless rates below 7% by January 2011 and 5.6% by June of this year. Obviously, that didn't happen.

President Obama has often tried to lower expectations by saying it will take a long time to dig out of the hole the 2008 financial crisis created. But even that can't fully explain the gap between the recovery he promised and the reality.

"All executive reelections are referenda on the incumbent, and the biggest driver is the economy," Nathan Daschle, the former executive director of the Democratic Governors Association, told Politico. "The lesson of 2010 is that chief executives get reelected when people feel they are stewarding a strong economy. They get defeated when it's going south."

As one of the people living on a income of less than 12,500 year on Social Security disability, I have given my life to the construction trade. At the age of 57. I find myself so struggling just to survive. Living on Peter butter and jelly and Kool-Aid. I can barely afford to feed my dog. I see our political leaders simply as self-serving greedy people that do not have the people's Best interests first and foremost. I know there are people who live on even less than half of what I am receiving and it is a shame that the greed and self-serving attitude is filtering down into state government. On both parties. The leaders are using the people for personal gains and cronyism outlooks.

And as far as being able to invest in anything monetarily, people living on the low end of the feeding scale are punished if they try to reach out and have any type portfolio. The corruption in the American government's by the Progressive Socialist Party is growing, in the end goal is to bring America people down to their knees.

There good Money Morning America where am I going wrong with this statement. Prices on everything is going up, and we still have to pay back the over $15 trillion. We have borrowed from people around the world, including our enemies. Yes far as the Matrix goes , it can be wiped out with a series of seven EMP detonations over specific locations around the world, and there would be no recovery for decades. For most markets and people don't have a clue what a starburst can do.

Dont worry about Obama or Romany Ron Paul will win. We will all better off come the convenction, when Ron Paul gets up and talks. Cant you american people see that.From a aussie friend