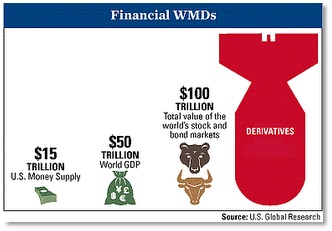 You can see the problem as easily as I can…there literally isn't enough money on the planet to bail us out, and I don't care who's got the keys to the printing presses.

Following World War II, we levered up approximately 10 to 1 as the U.S., Europe and Japan recovered. Then, in the 1970s, the United States moved away from the gold standard. Other nations followed, taking global leverage higher; 30 to 1 became the new standard.

Following the Asian currency crisis and the beginning of Japan's Lost Decade, things jumped to 60 to 1 as ChinIndia, the Dot.bomb boom and housing took off.

In 1999 Congress tore down Glass-Steagall with the Gramm-Leach-Bailey Act, and in the process removed many of the limits between commercial banking and securities firm affiliations.

Shortly thereafter, it passed the Commodity Futures Modernization Act in 2000 which specifically exempted credit default swaps and other exotic derivatives from reporting. That created a Wild West-like atmosphere for traders and their firms using leverage that jumped as high as 100-1.

With each progression down the slippery slope, the bubble simply grew and grew…and grew.

And it's not just in one market either…but in every market. I believe this is precisely what our leaders and bankers are missing. To them, the crisis appears like a bunch of independent bubbles each with its own unique set of causal factors and solutions.

Take your pick: the housing bubble, the credit bubble, the EU, China– you name it, only they're not so independent. 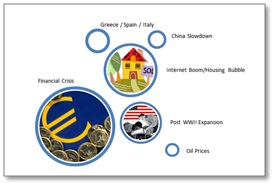 The Problem with the "Smartest Guys in the Room"

So why do guys like Ben Bernanke, Paul Krugman, our Congress, the ECB, and nearly every leader in the EU except Angela Merkel like the idea of printing their way out of this mess?

I've commented extensively since this crisis began about what they should be doing, so I'm not going to delve into those details again but here's a quick summary:

You may have your own opinions or even disagree with mine. That's okay and expected. There are no easy solutions this time, nor is there a singular perspective.

How to Beat the Bubble Economy

But, in terms of what we do as investors, there are certainly easy choices.

First, the return of your money has to be more important than the return on your money. Period. Any investment you make has to be made with the concept of safety in mind and the preservation of value at hand.

To me this means shifting focus from what the world wants to what the world needs, particularly when it comes to energy, inflation-resistant choices, and dividend-producing stocks with high free cash flow.

Second, don't walk but run away from long-term bonds and fixed-rate investments. I know this will piss a bunch of people off, but that includes many annuities and whole life insurance at this point. Any rise in interest rates will crater the value of these instruments and subject your wealth to unnecessary volatility.

Short-term bonds and variable-rate instruments are a different story. There you have at least a limited capacity to absorb the changes that will come from rising interest rates and a changing global financial system by continually recycling into new, higher rate instruments as they become available.

Third, make sure you are equipped to "buy and manage." Buy and hold has been dead for years and is unlikely to ever return. Sadly most people don't realize this and continue to confuse it with buy and "hope."

A lot of people don't like them, but I am a big fan of trailing stops. I encourage any investor who's serious about their money to use them as a means of capturing profits and protecting their hard-saved capital from serious market hiccups. Put options are a good choice for those with a more sophisticated toolset.

And fourth, you've got to know when to step back in.

I know that sounds like a contradiction given the stage I've just set in this article, but knowing when to buy is critical in markets like those we're living through now.

Don't confuse this with market timing.

What I am suggesting is that the markets have an upward bias over time, therefore outstanding performance over time becomes a matter of identifying relative weakness and buying into it rather than running the other way.

You can see that quite clearly in charts like this one: 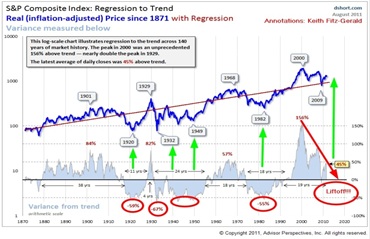 So don't give up the ghost.

Understanding the big picture as I have laid it out will help you comprehend the world we live in and how to use the mistakes policymakers are making to your advantage. It may not be easy to deal with emotionally nor pleasant to think about. But that doesn't make it any less important.

Believe it or not, the global financial crisis is actually helping us approach a point where market conditions will again favor buying more than selling, and even our policy makers won't be able to screw that up.

very good article..few questions A) if i hold my debt till maturity whats problem??b wher do we park liquidity??Is precious metals like Gold and silver safer bets??

Very well done Keith – the big bomb is what's been scaring me for the last 7 years. Breaking down the solutions – much of which is simply reversing failed regulatory changes is spot on – even Sandy Weil agrees. Read a great piece awhile back which in addition to repeal of Glas Steagall, the other catalyst for increased risk was the conversion of private investment banks into publicly owned institutions. Previously partners much more tightly managed the risks because it was their fortunes not someone else's at risk. Not sure how that can be reversed but your point to expose the exposures as well as limit the amount of someone elses money (especially taxpayers') is spot on. And of course some well placed and adjudicated criminal charges would go a long way towards reigning in reckless behavior – not to speak of reinstilling some confidence in our sadly tarnished markets

Just a couple of quick observations. I see so many people who seem to feel…and I'm not including you in this pool…that simply re-enacting Glass-Steagall would magically fix things, It would be some kind of panacea.

The horse is already out of the barn. G-S may help prevent the situation from getting any worse, but that big red bomb on your table is there and it ain't gonna just disappear because commercial banks are prevented from engaging in "investment" banking/wildy leveraged speculation going forward.

The market current enjoys a stable disequilibrium. When the disequilibrium becomes unstable, the whole thing avalanches. If it would wipe out JPM, not to mention Goldman and BofA, it might be worth living through it. Gotta clean out the "mutants."

The third perpetrator's name was Bliley, not Bailey. And let's never forget that Robert Rubin was the driving force behind scrapping Glass-Steagall, along with his fellow travelers, Phil and Wendy Gramm.

This is one of the best and most salient articles outlining our current condition that I've ever read. It's uncomplicated and to the point.

On the other hand (There has to be one of those, doesn't there?), if central banks stand back and do nothing, we'll probably see the biggest deflationary collapse in the history of mankind.

Frankly, I think it's likely we'll see central banks continue to do what they're doing until we experience a combined hyperdeflationary and hyperinflationary disintegration.

When interest rates are forced to rise, and liquidity rushes out of interest rate-sensitive instruments into commodities and other tangibles, credit assets could very quickly become valueless while things that require productive effort to produce become priceless.

I think that as these deflating assets are sold, the initial effect will be a huge increase in the value of currencies that can be used to settle these sales. In response to this, central banks will rush in with liquidity, which will then push all of those assets into tangibles (e.g., precious metals, collectables, everyday consumables, land, real estate).

The above scenarios should have played out in 2008, but the sovereigns were not yet quite bankrupt. Now that both the banks and the sovereigns are hypersensitive to interest rates—which has masked their true financial condition—everything is in place for the simultaneous hyperdeflationary and hyperinflationary collapse to take place.

It's going to be fascinating to see how this all plays out. But more interestingly is the question of when this will actually happen—tomorrow, next week, next year, or at some point even further out. Regardless, something wicked this way comes.

Why do all these articles have to ramble on and on? Cut to the chase!!!!

Ah, Keith- the world's central bankers may not be "missing" all this but our politicans sure won't ever "get it" either. They won't change or cut back on real spending , no matter who is elected. Bankers are all to happy to lend to spendthrift sovereigns ( Greece, Spain, Portugal, Italy, etc.)

Central Banks Around the World were net sellers of gold from 1999-2002. Gold hit bottom and the breaking point for South African gold producers. These sovereigns were heavily in debt and laying off thousands of miners. South Africa sold 323,000 hectares of forest to raise $ to pay debts and stay afloat. The same central bankers made deals and bought their gold mines.

Now they have most of the gold and the mines too! Ten years ago they started buying back all the gold they sold. What do you these bankers are ultimately after? A global scheme of new "funny money" controlled by you know who? Everyone will be indebted to them. Who calls the shots then? Sure not the President.