The landmark Supreme Court ruling to uphold the Patient Protection and Affordable Care Act (PPACA) – informally known as Obamacare – has fundamentally changed the relationship between U.S. consumers and the healthcare market forever.

The decision will have sweeping political and economic ramifications. And moderate estimates say it will cost $900 billion to implement.

Editor's note: New research shows that the federal government's current economic policies and programs could be exponentially more dangerous than first suspected. And time could be running out for Americans to prepare their wealth, investments and day-to-day life. Find out more here.

But while almost everyone is hung up on the law itself and its economic sustainability, smart market-watchers are already moving to invest in the individual sectors poised to profit.

The PPACA was crafted to provide and guarantee health insurance to more than 30 million U.S. citizens who lacked coverage or were underinsured prior to its passage. And the law furnishes three different programs to provide that coverage:

These three programs will have a profound impact on a sector that is already central to U.S. economic survival.

Healthcare represents 16% of the total U.S. economy, and it continues to grow at a staggering pace compared to overall production figures and growth in other sectors. According to government forecasts, total healthcare spending will grow at an average rate of 5.7% a year between 2011 and 2021, far outpacing the predicted growth rate of the nation's gross domestic product (GDP).

That means any regulation of the sector will have big – and potentially very profitable – implications as it comes into force over the next 18 months.

The new legislation's most significant effects on domestic healthcare spending will occur in 2014. According to estimates, expansion of insurance coverage (both private and government-provided) will spike at a staggering 7.4% in 2014. Spending will dramatically increase on physician services and drug prescriptions as millions of newly insured patients start using their benefits.

But here's the most stunning figure of all.

By 2021, government spending at all levels could reach 50% of total national health costs, and nearly two-thirds of that spending will come directly from the federal government.

Editor's note: Government spending is out of control. And the "fiscal cliff" you've heard so much about is going to look like child's play compared to what could be coming. It's up to you to protect yourself and your family's way of life. Go here for details.

This offers huge potential to three sectors that cater to the swelling ranks of healthcare patients around the country. All three will see chart-busting growth in the "new healthcare economy." And I've found the best stock picks in each sector to bring you incredible – and reliable – gains as healthcare transforms.

Perhaps the most vocal cheerleaders of healthcare reform were executives at pharmaceutical companies across the country.

Forbes reported in 2009 that pharmaceutical companies would spend as much as $150 million in advertising and advocacy to support healthcare reform.

And spend they did.

The pharmaceutical sector spent $140 million on two healthcare advocacy groups to promote this bill: Healthy Economy and Americans for Stable Quality Care. Throughout the passage of the law, these two advocacy groups were central in messaging and lobbying for votes of congressional representatives and senators.

And the results couldn't have been better for them. After all, an additional 30 million patients will provide a strong boost to these companies' profits. Especially when concerns had grown that U.S. prescription drug spending was slowing down significantly. 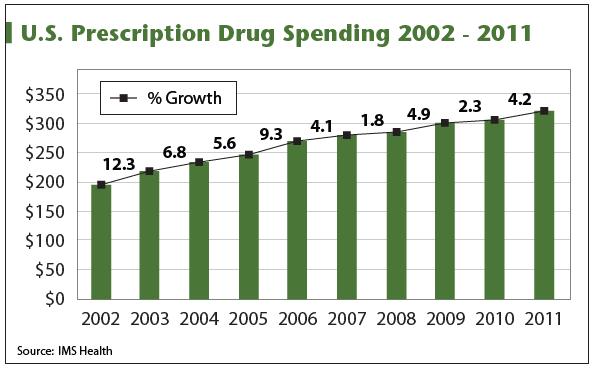 Last year, spending on medicine in the United States reached a remarkable $320 billion, up 4.2% over the previous year.

That's a whopping $1,000 a year for every man, woman, and child living in the country.

Editor's note: A similar "zero growth" pattern is emerging in the U.S. economy, the energy markets and the global environment. And it could jeopardize your wealth, investments and way of life. This is the most dangerous threat facing America – and your wealth – right now. You can get details here.

In the new economy, patients have cut back on name-brand prescriptions and increased the use of generic drugs to treat their aches and pains. But with the expansion of the healthcare bill, and more and more people joining the public rolls, we might be heading for a period of irrational exuberance in this portion of the healthcare sector.

That means the manufacturers and marketers of the most commonly prescribed brand drugs will still be doing okay (to say the least). And we expect these three companies to benefit most:

Pharmaceutical companies provide a nice steady dividend stream – with stronger yields than other healthcare-sector companies. They also provide the opportunity for greater share appreciation coupled with those dividend payments.

And they're going to make money hand-over-fist as Obamacare goes into action.

But if you're looking for growth stocks – and triple-digit winners – you'll want to see my next recommendations.

These stocks have been beaten up and down the block in the last few years.

Their industry is vitally important to the health and safety of America. As a business, though, it's been a losing proposition for decades.

But that will change with Obamacare.

Chart-Busting Industry #2: Big Gains in a Beaten Down Sector

Overall, the biggest winners from this ruling could be hospitals.

On the day of the healthcare ruling, the hospital industry spiked. And with Obamacare in full effect, hospitals will be able to increase profits and reduce debt loads – which is good news for the beaten down industry.

Most hospital stocks were hit hard by the financial crisis. And these companies have been surviving on smaller profit yields and a growing percentage of patients who can't pay their bills.

But with Obamacare's near-universal health insurance coverage, hospitals are able to guarantee a significantly larger portion of their patients can pay for the services they're receiving – including those to patients who would have been uninsured and unable to pay before.

These hospitals also stand to profit from an increase in high-margin elective surgeries when more patients gain coverage.

Guaranteed payments and a much smaller percentage of defaults by patients should bring hospitals higher revenue – and send their stocks northward in a hurry.

With the advent of Obamacare, the business of running hospitals could become a whole lot more profitable. These best-of-the-best hospital stocks will "pop" at every positive announcement for the healthcare bill. And as they generate more profits, stock valuations will steadily increase – along with share prices.

But hospitals won't be the biggest winners in the Obamacare race. And investors who want the biggest bang for their buck should look in one place.

Finally, one of the most obvious beneficiaries in the near-term is the health insurance industry.

Health insurers will benefit from increased premium revenue provided by state healthcare exchanges and from a new crop of customers required to carry coverage under the new law.

With millions of new patients expected to join their customer rolls, health insurers stand to experience a steady revenue boost, despite the requirements imposed on them by the bill.

One of the key dynamics of this healthcare bill is that health insurers are no longer able to discriminate against potential new customers due to preexisting conditions.

But the addition of millions of low-risk customers will absorb the expected rising costs of new high-risk patients.

As an investor, owning a blend of hospital, insurance, and pharmaceutical companies will give you a balanced approach to profiting off the recent healthcare ruling. And remember to research any new stocks you're considering before jumping in. It pays to be cautious when buying into an unfamiliar new sector.

But these Obamacare stock profits are only the tip of the iceberg… There are much bigger profits – and much bigger dangers – around the corner for those who can see what's coming.

As you've seen, the mid-term view for these three industries – hospitals, insurance and pharmaceutical companies – is phenomenal.

There's one more thing you should know about…

Even after the Supreme Court's Obamacare decision, there are strong doubts about the long-term success of the program – and the rest of the government's recent interventions in the American economy.

And that's putting it mildly.

New research shows that the federal government's current economic policies and programs could be exponentially more dangerous than first suspected.

In fact, these policies could soon bring about an economic catastrophe… affecting the wealth and financial security of millions of unsuspecting Americans.
To understand the truth about America's economic future, take a look at this gripping investigative documentary.

You owe it to yourself to learn what plans like Obamacare are hiding from you.
Watch the video now.