I've gotten quite a few great questions from readers lately so I thought we'd take a quick peek into the mail bag today.

As always, I love answering questions from the Money Morning family so please feel free to keep the conversation going by sending your questions to: keith@moneymorning.com

Let's get started with a great question about what Bill Gross said a few weeks ago regarding stocks....

Q - What do you think of Bill Gross's recent comment that equities are dead? - Martin R.

A - I think he's as wrong about this as he was about his well-publicized February 2009 call to avoid bonds - a mistake, by the way, that cost investors $5.7 trillion according to Forbes contributor Peter Cohen - and his February 2012 call to do the same thing.

Sure it sounds great considering who he is in his capacity as a bond manager with $1.4 trillion under management, but avoiding equities is a sure path to ruin. They've always involved risk and risk produces returns. Therefore, if you want the returns, you have to take the risk.

It's how you control risk that matters when it comes to big, consistent profits. Most people, though, fail to make the connection and pay a terrible price as a result.

The other thing to think about is that the markets don't price on growth. That's something Wall Street analysts have cooked up to keep you distracted. They price for risk and always have, which is yet another reason to turn conventional thinking on its ear.

Q - I can't believe our leaders. A year after the last debt debate our spending is up another $2.1 trillion. And? - Dan B.

A - Me neither. The actual fiscal gap - that's the present value difference between projected spending and income - is a staggering $222 trillion. That's $11 trillion more than it was last year and represents the true federal deficit according to Boston University Professor, Laurence Kotlikoff, who reviewed the latest CBO data.

Let me put that into perspective.

Our leaders portray themselves as making heroic efforts to cut funds that will save us money over the next ten years. They love to appear on the evening news with very earnest faces and dour expressions.

Puuuulllleeeeeeaaaassseeee -- the $2.1 trillion they're fighting over is 0.95% of the money we already owe ourselves. 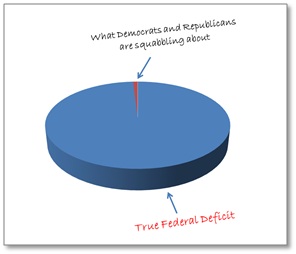 They're essentially arguing over a leaky faucet when the house is floating away. $2.1 trillion is little more than a rounding error.

Q - What do you make of the Justice Department dropping its criminal probe of Goldman Sachs? - Paula R.

A - A travesty. So far not a single mega-bank nor trading house has been held accountable for its role in the financial crisis. The fact that the Justice Department cannot meet the criminal standards of proof needed to prosecute suggests three things: a) a lack of competence in the Justice Department, b) a clear need to change the laws to enable effective prosecution, and/or c) the fact that the sleazy characters involved continue to maintain their incestuous relationships and are therefore somehow afraid of the repercussions associated with prosecution or turning the lights on people who would just as soon remain in the shadows.

Q - What do you make of China missing its export estimates recently? - Hairong L.

A - Not much. Look closely at what happened. China reported exports rose 1% versus a year earlier as imports rose 4.7%, resulting in $25.15 billion trade surplus. This points to continued internal development and less reliance on exports.

Don't forget that China's stated policy goal is balanced imports and exports by 2015; therefore, it's only logical. I have warned many times that we will see more surpluses like this in the meantime.

There's something else to consider, too. Many news sources reported last week that the markets dropped because "analysts expected Chinese export gains of 8%," according to Bloomberg.

What they should highlight is the fact that Wall Street analysts are so poor at predicting things and understand so little about what they are forecasting that they got it wrong again.

This is as true with exports as it is with earnings, which is why I am reminded of the old joke that God invented economists to make weather forecasters look good.

Q - I watched your video recently and was stunned to learn that banks were told to prepare for complete collapse and no Federal aid...by the Federal government. Do they know something we don't? - Carol D.

A - Emergency planning is a normal part of financial markets. Every financial institution is responsible for preparing contingency plans. What makes this different is that the so-called "living-wills" directive actually requires the banks involved to specify how they would liquidate themselves and not blow up the financial system in the process.

To call me skeptical would be an understatement. Don't get me wrong, the idea is a great one as outlined in the Dodd-Frankenstein act, but we have not seen a bank, nor a regulator, nor a congressional leader act decisively since this crisis began.

I doubt we will when the next crisis surfaces, either, if for no other reason than there will be entirely new risks not presently contemplated.

In that sense the "living wills" are nothing more than a financial Maginot Line and probably about as effective.

Selling clients bad investment products described in inhouse e-mails as "crap" is no surprise. Just go back to the investment banking culture of the 1990's and you get even more unacceptable behavior. For example, Morgan Stanley traders would create a deriviative product to peddle to institutional clients and then brag about how they planned to eventually buy them back at a huge discount. The in-house slang term for doing this to a client: " Rip his face off ".

Honestly, with "regulatory capture" and the fact U.S. BANKERS own most of Congress, the Senate, the President ( last one, current one, and next one), I don't believe much will be changed for the better.

I think the China export estimates are about as far of as they want us to feel, that is there goal to let others think there ship is slowing down. Well there ship is slowing down like most super liners out in open water or the huge jet liners can not turn on a dime and that they want the projection of a slow down will mean dollars that they have to pay less by this perception. KBar Financial Services Int. has seen this coming and has cracked a door to show why in there last secretive session. The Asian market is making a slow turn so they have to slow the ship down. Although they are not flush with cash they are 95% more flush than anybody else per there small population that is in there circle and a few of there partners that think they are partners, the old keep your friends close and your not so close friends for a lack of a better word closer, I think you know what I mean . Where they are concentrating on and what they let you see is very very far apart even the biggest deals the do internationally that everyone in the world see's has a whole bigger than the Grand Canyon theory behind them. Sure they are looking in all the corners of the earth for deals to buy and partner but they do not want to flash cash they just want you to know that they can get the money if they want to buy something. This is no cost plus deal where they will always be highest bid they are playing the time and material with the skill of psychology to buy and wait till they walk away and smile, sure they will shake your hand and smile on each deal but once behind close doors the laughter and cocktails will be much more ear to ear smiles and they are not going to make a big wake when the ship is turning they don't want to spill a drink they want every last drop. When the ice is melted and the drinks and smile slow down the will get there rest with one eye open always ready to turn the ship. The land of the sting could be on for many of there deals if they pay before looking behind all the doors but they will do so many with Obama's money it will not hurt when they where getting them free in the first place. They also have to spend that cash as it will eventually loose value. I admire and respect a competitor when the street goes both ways but we have built a one way street to loose a lot and pay for it is the kicker, like paying the robber to rob you or your friends and they are getting your money and assets . China's biggest asset is the Media which they control with an iron fist and there people will revolt but it will never get to the next block and it will never be seen unless some one's cell get gets a video but as the money report shows wih some of there other recommendations or observations or how ever it is said, some how the technology for the rest to see will be cyber stopped and China is probably the best about letting you see what they want you to see. Great article it is a shame we let our selves get so far behind. Again good reporting ! !

Thanks for your message, i got it and i hope we could countinue our bisiness and i am ready for getting your message and when you are ready for when and how can we transfer by your system and with that system you will offer

Need some clarification of your system as we are getting receiving bank details ready.