If only CEO Mark Zuckerberg had used a bit more imagination when cooking up the Facebook Inc. (Nasdaq: FB) ticker symbol, its stock might have fared a little better.

The phenomenon is particularly true for IPOs, with the "fun name halo" extending about 10 days out from the stock's first day of trading.

Companies that choose a ticker symbol that doesn't form a pronounceable word - yes, like Facebook (Nasdaq: FB) -- often struggle. Generally speaking, the more jumbled the letters, the worse a stock does.

"[Our] research shows that people take mental shortcuts, even when it comes to their investments, when it would seem they would want to be most rational," Professor Daniel Oppenheimer, who co-authored a 2006 Princeton University study of the subject, told Psych Central.

While the academics who have studied this have not conclusively nailed down the cause, most suspect it has to do with something called "fluency," or how easily a person can process information.

People are simply drawn more to a catchy ticker symbol like YUM than a drab one like FB.

"It is possible that [people] are initially more attracted to fluently named stocks, that they pay particular attention to those stocks, or even that they favor those stocks because they have developed an association between easily processed names and success," Adam Alter, Oppenheimer's research partner, told The Wall Street Journal.

The Science Behind Clever Tickers

Alter and Oppenheimer studied nearly 800 stock listings between 1990 and 2004, looking at intervals of a day, a week, six months and a year after the IPO.

They found that IPOs with catchy ticker symbols on average did vastly better than those that didn't.

"The effect was strongest shortly after IPO," Alter told Psych Central. "For example, if you started with $1,000 and invested it in companies with the 10 most fluent names, you would earn $333 more than you would have had you invested in the 10 with the least fluent." 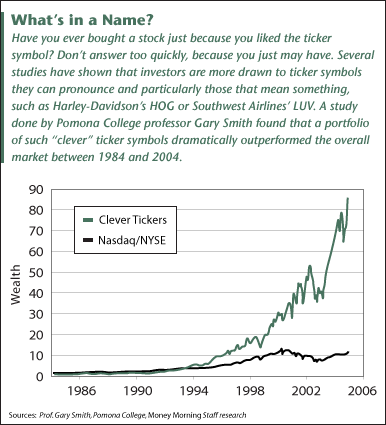 Another study by Pomona College finance professor Gary Smith looked at the effect of a catchy ticker over the long term. Here, too, clever paid a dividend.

Smith's portfolio of clever ticker stocks, measured over a period from the beginning of 1984 to the end of 2005, earned a 23.5% return compounded annually. That more than doubled the 12% return of a hypothetical index of all NYSE and Nasdaq stocks over the same period.

Smith also found that the degree of cleverness also mattered. The tickers considered the most clever (as determined by the votes of a group of test subjects) did the best, with 71% beating the overall market. Only 59% of the next-best tickers beat the overall market.

That people would let their investment choices be influenced by something as trivial as a ticker symbol is hardly far-fetched. Psychological factors drive the market all the time.

For example, people buy "momentum" stocks mainly because they're going up or down.

Lessons from FB, GRPN and LNKD

The wave of social media IPOs over the past couple of years shows both of these psychological forces in action.

With clever ticker symbols, social media stocks have proven that a dog with a pretty name is still a dog. In other words, a catchy name can't prop up a lousy stock, at least not for long.

Facebook chose a blah ticker to go along with its weak business model. Sure enough, the stock slipped $4 below its $38 offer price on day two and now sits under $19.

A better ticker choice - LIKE, for example - might have helped to slow Facebook's swoon, but eventually the company's lack of profit potential would have dragged the stock down anyway.

For proof, just look at Groupon Inc. (Nasdaq: GRPN). This social media stock chose a pronounceable ticker symbol, but its prospects for sustaining profits may be worse even than Facebook's. GRPN opened $8 above its offer price, but slipped $2 by the first day's close. It's down 84% since.

Then there's LinkedIn Corp. (NYSE: LNKD). Here we have both a catchy name and a workable business model. LNKD soared 109% on its first day of trading in May 2011and is up over 15% since, triple the performance of the Standard & Poor's 500 Index.

The lesson, of course, is that investors need to resist all psychological influences and focus on a stock's fundamentals.

That's not to say awareness of the catchy ticker symbol phenomenon isn't useful, but investors do need to make sure they don't get caught up in the silliness themselves.

"We certainly don't recommend that people make trading decisions based on our findings," Alter told the Journal. "Rather, our findings suggest that economic models should take psychological factors...into account if they are designed to faithfully capture how the markets operate in practice."