Not too long ago I mentioned that whatever European Central Bank President "Super Mario" Draghi delivers, it had better be big.

Because the only way he could hope to shore up the beleaguered euro, wrest control of interest rates from the modern day financial pirates that dominate credit default swaps and break the impasse between skittish investors was with a monetary "bazooka."

We certainly got one yesterday when he announced an unlimited bond purchase program designed to do exactly this.

The S&P 500 shot up 26.13 points while the Dow and Nasdaq both tacked on 216.01 and 62.80 points respectively. European markets also moved sharply higher on the news as well while Spanish and Italian yields tumbled at maturities of every length suggesting traders relaxed their risk aversion stance considerably.

Under Draghi's plan, the ECB will be buying unlimited amounts of short-term sovereign debt while also sterilizing that debt-- ostensibly to stave off concerns about hyperinflation and further money printing.

Up to now, the ECB has only purchased troubled EU bank bonds as a buyer of last resort. So this is a big change now that Draghi is talking about stepping up as a sovereign debt buyer, albeit also of last resort.

Draghi noted interestingly that the ECB will retain exclusive decision making on when to engage in purchases, the amounts purchased and when to stop. This effectively puts the politicians on notice that further bickering will not be tolerated.

Further, Draghi did not rule out purchases of Greek, Portuguese and Irish bonds when those countries regain practical access to the bond markets.

There are a couple of things that stand out here...

A Cause for Fear-Not Celebration

First, things are so bad that insiders are using euphemisms to describe Draghi's plan which is officially referred to as a "blueprint" and called "Monetary Outright Transactions."

I don't know about you but if it smells like a duck, walks like a duck and quacks like one, too...odds are pretty good it's a duck.

It doesn't matter whether you are talking quantitative easing or bond purchasing. The fact that things are so bad that central banks - first the BOJ, then the Fed, now the ECB - have to wade in as lenders of last resort should be a cause for fear rather than celebration.

If not now, then a few years from now, when it all comes back to roost.

Under Draghi's blueprint, the ECB is going to be buying bonds from troubled sovereigns. The banks, meanwhile, "sterilize" their debt by investing with the ECB.

The only trouble is that the banks have been borrowing money from the sovereigns all along so the money they are "investing" to sterilize the ECB's purchases really came from the ECB in the first place.

The money is simply going around in circles - whether that's like a tornado or a toilet bowl depends on your perspective. 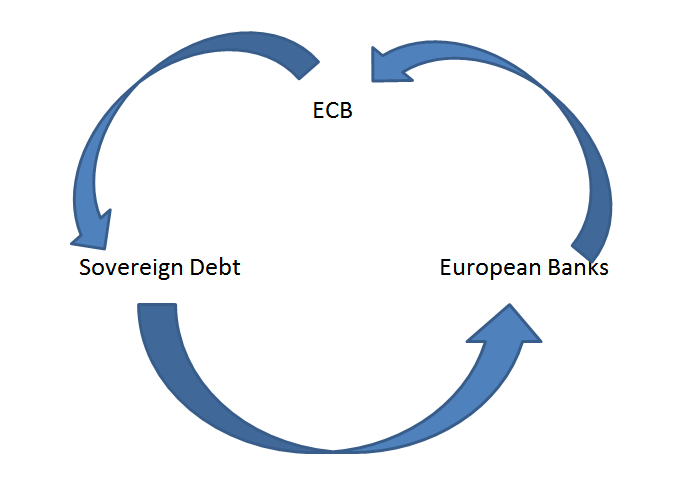 Then there's the cash itself.

As I understand it, Draghi's plan presumes that European banks are going to invest it in the ECB as part of the sterilization process. Last time I checked, many European banks are functionally insolvent because they don't have enough cash to operate let alone invest the excess, especially when it comes to Spanish and Italian banks.

At the same time, banks are deleveraging in order to meet revised capital requirements. They are selling assets and scaling back lending. When you scale back lending you have less credit. And less credit means less growth.

The ECB itself forecasts the economy will expand by 0.5% in 2013 and a deeper economic contraction in 2012 that shows Eurozone GDP dropping 0.4% instead of 0.1%.

In other words, the numbers are already going in the wrong direction - and that's before any sort of austerity whatsoever. Imagine what happens when somebody actually starts getting serious about spending less.

Second, the plan targets sovereign government bonds with 1-3 year maturities while also including longer dated instruments that have residual maturities within the 1-3 year time frame.

That means there are huge swathes of the credit market that will not be stabilized nor sterilized. It also fails to address corporate and private debt both of which have also reached problematic levels in the EU just like they have here in the United States and Japan.

According to Eurostat long term sovereign debt accounts for between 74.6% and 98.9% of total debt in 23 EU member states. Shorter term levels of less than 5% were recorded in Estonia, Slovenia, Austria, Slovakia and Poland. Only Sweden and Romania presented a significant short term debt ratio which Eurostat defined as greater than 23% according to the latest data. 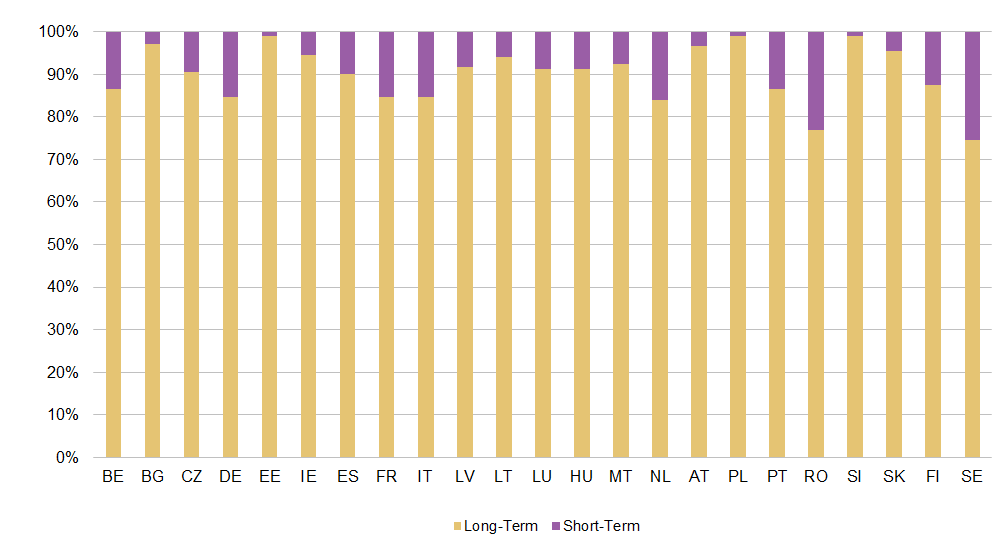 In other words, by addressing the short term debt (in purple), the ECB is potentially leaving the bulk of the long term market (in yellow) out of the picture.

(Admittedly, details are hard to come by on this point only hours after Draghi's announcement so I'll plan on an update for Money Morning readers in the weeks ahead as we learn more about the exact debt composition details.)

Third, Draghi's concept of "unlimited" really bothers me. It's been a common theme so far because policy wonks want to "send a signal" to the markets that they are serious about fixing this problem.

I don't know about you, but I am tired of signals.

What I would like to see is governments learning to live within their means and the derivatives traders who have fractured the credit markets, making Draghi's actions necessary, held accountable for having driven the rest of the world to the brink of financial oblivion.

Granted, Draghi did say that nations requesting purchases will have to apply to the ECB and maintain specific behavior to qualify on a periodic basis, but so what.

EU membership supposedly required strict adherence to the Maastricht criteria which formed the basis of the initial economic and monetary union and that's been effectively ignored or violated six ways to Sunday since it was signed in 1991.

Draghi's plan is little more than a fresh shot of intoxicants for stimulus addicted markets. I have no doubt that it will create a "rush" that people enjoy.

How big and how long this "rush" lasts really doesn't matter - two weeks or two years - I don't know.

What's far more important is that investors think through what will happen next and take steps to help to protect their money once the high wears off.

I'm not trying to ruin your day but I think it's much more important in this instance to be a futurist than a nowist.

At the end of the day, I'll take a rally. Right now the world's investors could use one psychologically and financially. But, get ready for reality.

Once traders and central bankers figure out what unlimited actually means and how expensive Draghi's bond bazooka will become I have no doubt we're going to experience the entire doom, gloom and boom cycle all over again.

Could someone explain to me how the ECB buying of debts that nobody else dares to buy, is going to solve the debt crisis and save the Eurozone? Does it decrease those debts? Or make them bigger?

Does it make those debts safer in terms of rating? Or unsafer?

Will investors now say to Spain and Italy: “This changes everything. Now that the ECB wants to buy your debts, I also want to lend to you! Because now the strenght of your economy changed!”

Who pays for these bonds to be bought by the ECB? The rest of Europe, right? Why are the markets cheering?

Mario Draghi-I agree with your assment of the Mario's solution. As an investor when I read about his solution I was dumbfounded as to the markets reaction(rally). I am not smart;therefore I will make assumption that a majority of investors see more to the downside of Mario's fix than I do. So the question is-who is really pushing this market????? I keep thinking about reasonable dividend paying stocks like AT&T with PEs in the 30s and what this might mean going forward!

Your comment implies that ECB MUST buy long term debt to calm markets and avoid disaster…..who told you that?, any monetary policy (including U.S in first place) never assumes PAYING debt as a rule or obligation.

The owner of the print machine must provide conditions for stability, including inflation, who told you that paying long term debt is part of that principle?. Do you think FED is going to pay what is in the market?, they just print more money when conditions allow it.

Europe is doing a GREAT job in the control of deficits, responsible sustainable social policies and is, as usual illuminating the way for the rest of the world for XXI century,is not just kicking the can to our grandsons as U.S. has been doing the last 40 years

Money invested in common shares is already spent. The money is made of paper. A bond is repayable with paper money. Most money is created by fractional lending. Ahhh.. Such simple truths. Another truth is that they, whomever they are, will say and do anything to keep the dream of a unified Europe together. So the money will keep right on spinning and I wouldn't worry unless someone starts talking about gold backing, silver backing or copper backing. That would be the signal to run for the hills, Kenya maybe?

I look forward to your comments