Investors have prepared for the Federal Open Market Committee (FOMC) meeting today and tomorrow to end with the announcement of a third round of quantitative easing (QE3) - and that's a good bet to make.

Today's Fed meeting will likely end with more of the same information we've been hearing for months from U.S. Federal Reserve Chairman Ben Bernanke. It's been a year and a half since Bernanke first announced that short-term interest rates would remain near zero "for an extended period." That language will likely stay the same tomorrow, and the policy timelines could be drawn out even longer.

There is also no doubt that QE3 or some other meaningful economic stimulus measure is on its way.

Maury Harris, an analyst with UBS, declared in a recent note to clients that, "We now anticipate an announcement of another round of quantitative easing at the FOMC meeting on September 13th. We expect the easing will take the form of a six-month program of at least $500 billion, primarily focused on Treasuries."

Harris also added that, "We also expect the FOMC extends their rate guidance into 2015."

Traders have been expecting the announcement of QE3 or a similar measure at recent FOMC meetings and at Bernanke’s Aug. 29 speech at the economic policy summit in Jackson Hole, WY, since it became obvious in June and July that the U.S. economy was weakening.

The accompanying chart shows how traders/investors poured money into commodities-related investments to prepare for the announcement. 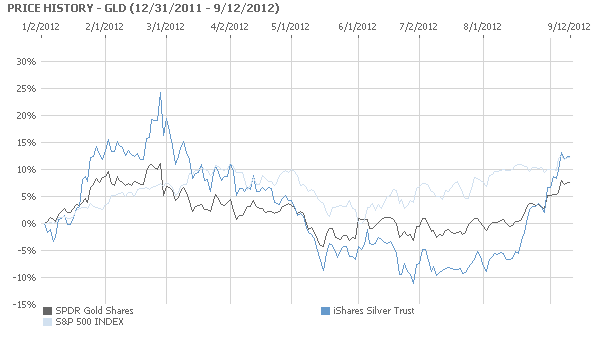 After falling earlier in 2012, the prices of the exchange-traded funds for gold, SPDR Gold Shares (NYSE: GLD), and silver, iShares Silver Trust (NYSE: SLV), have surged since the June and July reports.

Traders expect QE3 to greatly weaken the U.S. dollar, as did QE2. From that, the prices of gold and silver rise as investors seek shelter in the traditional safe haven assets.

In a CNBC interview on Sept. 5, gold expert David Lennox stated that, "We're still of the view that gold going forward we think is a reasonably good place to put some of your portfolio, yes, when you have the potential for events such as a third QE to come about out of the Fed Reserve. That could act as a real catalyst that could push gold, we think, back toward its record of $1,900 an ounce. ... We're still probably at this stage to get toward that $1,900 level. We do think that all events are slowly pushing the Fed toward taking a quantitative-easing stance."

This is all as a result of the lingering weakness in the U.S. economy, highlighted in recent reports.

While the Federal Reserve has clearly been signaling that more economic stimulus action is coming, it will most likely not begin until after the November elections. Bernanke cannot do anything that looks like he is trying to influence the voting on Tuesday, Nov. 6.

That’s what happened with the previous QE program.

QE2, however, did not begin until November 2010, after the mid-term elections.

While the Fed is moving nearer to announcing QE3, not everyone is convinced it’ll be this week. The odds are even that it will be announced Thursday.

Following the release of the August Fed minutes, chief economist John Silva at Wells Fargo Securities told Bloomberg News, “They’re closer to doing QE3 than I would have guessed. It may not be September. It could be October.”

There’s also disagreement within the Fed whether or not the U.S. economy needs QE3. Dallas Fed President Richard Fisher commented on Aug. 8 that the Fed has already delivered adequate economic stimulus.

And despite the copious amounts of dollars the Fed has spent to goose the economy, the two prior rounds of QE have not worked in bringing down the jobless rate or kept the pace of the economic recovery going.

Tune in to Bernanke’s press conference at 2 p.m. tomorrow to see what the Fed meeting will deliver.