With another syringe of quantitative easing being injected into the U.S. economy's bloodstream, Ben Bernanke is giving the markets their liquidity fix.

The Federal Reserve's action reaffirmed the stance I've reiterated on several occasions that the governments across developed markets have no fiscal discipline, opting for ultra-easy monetary policies to stimulate growth instead.
The government's liquidity shot promptly boosted gold prices and gold stocks, as investors sought the protection of the precious metal as a real store of value.

In fact, since the beginning of 1984, as money supply has risen, so has the price of gold.

The dollar declined due to the Fed's easing, which isn't surprising, given the fact that gold and the greenback are often inversely correlated, and increasing money supply generally causes the currency to fall in value.

What's interesting is that currency decline was what Richard Nixon sought to avoid when he ended the gold standard in 1971 and announced that the country would no longer redeem its currency in gold.

During his televised speech to the American public, Nixon translated in simple terms the "bugaboo" of devaluation, saying, "if you are among the overwhelming majority of Americans who buy American-made products in America, your dollar will be worth just as much tomorrow as it is today."

As you can see below, more than 40 years later, a dollar is worth only 17 cents.

This significant decline in purchasing power only strengthens the case of gold as a store of value, likely prompting Global Portfolio Strategist Don Coxe to propose making Nixon the "patron saint of gold investors," during this year's Denver Gold Forum.

In its long-term asset return research charting economic history in comparison to current markets, Deutsche Bank illustrates multiple ways how "the world dramatically changed post-1971 relative to prior history." While the research firm makes it clear that returning to the gold standard would be "disastrous," DB finds that the "lethal cocktail of unparalleled levels of global debt and unparalleled global money printing" are relatively new governmental developments.
Prior to the last four decades, deficits only occurred in extreme situations of war or severe economic setbacks, such as the Great Depression.

Balanced budgets were a "routine peace time phenomena in sound economies." Since 1971, surpluses have been rare. The U.K. has had an annual budget deficit 51 out of the past 60 years and Spain has had 45 years of deficit spending over the past 49 years, according to DB. 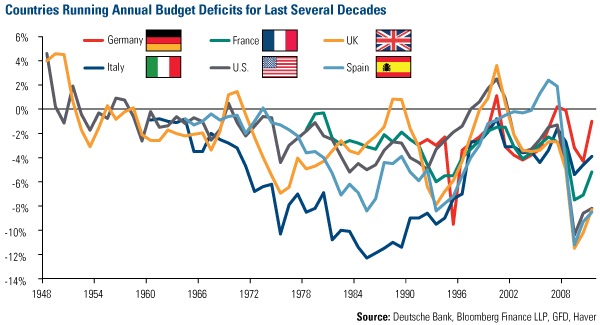 Many developed countries are in a predicament, as fiscal austerity attempts have led to weaker-than-expected growth in Greece, Ireland, Portugal, Spain and Italy. DB asks, "Can we really be confident that the developed economies that we have created over the last 40 years have the ability to withstand the effects of austerity and cut backs? Do our modern day econometric models have the ability to understand the impacts of fiscal retrenchment after a financial crisis having been calibrated in a period of excessive leverage?"

Countless discussions over fiscal and monetary policies will carry on, but time will tell.

Ian McAvity, editor of Deliberations on World Markets, says, "Excessive debt creates deflationary drag that they repeatedly fight by throwing fresh 'liquidity' or 'stimulus' at, to debauch the currency of that debt … For private investors, gold is the best medium for self-protection and preservation of purchasing power in my view." I agree. Rising money supply, declining purchasing power and annual deficits are giving the all-clear to include gold in your portfolio.

Many others appear to agree with us, as sentiment has shifted in favor of the metal in recent days: According to Morgan Stanley's survey of 140 institutional investors in the U.S., gold sentiment was at its highest bullish reading since July 2011 and the largest month-over-month increase during the survey's three-year history!

So, gold investors, if you haven't put in your orders, consider getting them in quickly, because the bulls are buying. Credit Suisse saw "massive inflows" into gold exchange-traded products in August after experiencing significant outflows compared to crude oil and the broader market in March, April, May and July. August shows a clear preference toward gold. 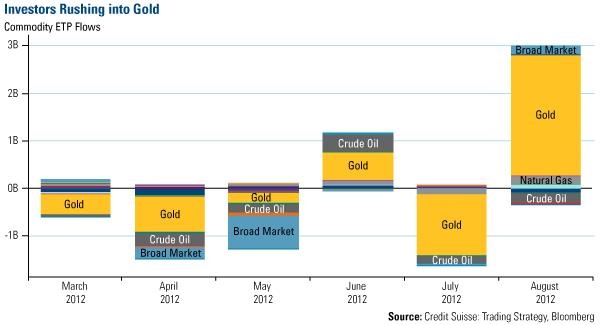 We generated lots of interest when we showed our standard deviation chart a few weeks ago, so I updated it through September 13. Although gold has been on a tear recently, breaking through the stumbling block of $1,600 and climbing to $1,770 by Friday, bullion still looks attractive, with a low sigma reading of -1.7. 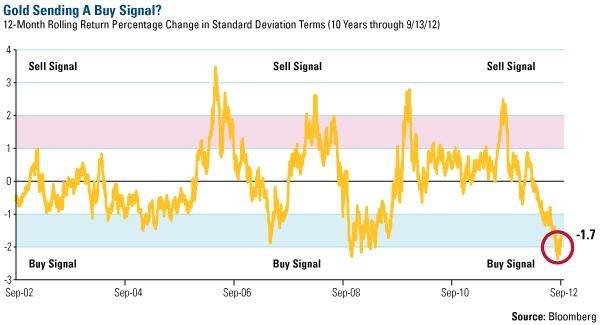 A look at a histogram shows how many times gold bullion historically fell in this sigma range. Today's sigma of -1.7 has occurred only about 2 percent of the time. Bernanke and Draghi only made the decision more obvious for gold and gold stock buyers. 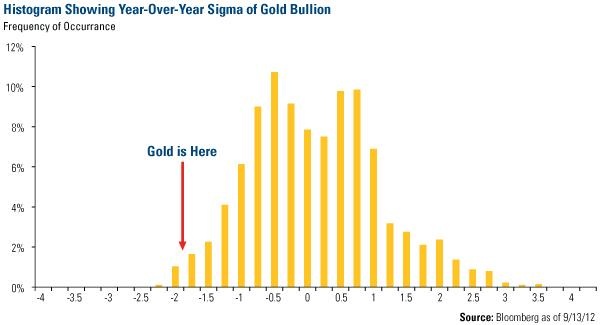 The Fed and ECB also make my job presenting at the Hard Assets conference in Chicago very exciting. Don't miss my presentation on September 21. I invite you to be there in person if you live in close proximity to Chicago, or you can download a pdf at www.usfunds.com following the meeting.

You might also learn something you didn't know with our newest interactive slideshow, the 10 Surprising Uses of Commodities. Check it out and share with a friend.