Don't worry about scanning headlines every day to determine the U.S. economy's chances of entering a recession in 2013.

We already know the answer.

Such indicators as gross domestic product (GDP), consumer spending, durable goods and exports all point to an economy not in a slow recovery, but on the verge of a 2013 recession.

That's because the trend lines, rather than showing gradual improvement, are moving in the opposite direction. The economy, after spending months with its head just barely above water, is about to go under.

The U.S. Commerce Department last week revised second quarter GDP sharply downward from 1.7% to 1.25%. The GDP was 1.9% in the first quarter of 2012. While we do not yet have any official data for the current quarter, a Federal Reserve Bank of Philadelphia survey of forecasters in August put the number at 1.6%.

The Mounting Evidence for Recession 2013

There's actually a term for what we're experiencing: the "stall-speed economy." It's roughly defined as a period of two or more quarters in which the GDP remains mired below 2%. 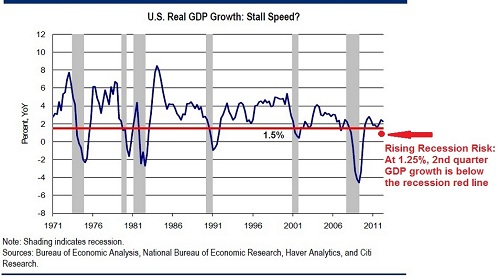 And the headline GDP numbers only tell part of the story. All too many economic indicators are flashing a warning that growth will slow down even more.

Here are three pieces of the GDP that show how the economy is getting slammed from several directions:

In addition to the GDP data, there's plenty of other evidence pointing to a 2013 recession:

Even if such a tottering economy isn't quite weak enough to tip over on its own, all it takes is a little push from an external shock, such as the Eurozone debt crisis.

While recession 2013 may be inevitable, investors do have options – and time – to protect themselves.

Protect Yourself From Recession 2013

One is to invest in those countries not suffering recession, such as emerging markets or Japan. In Japan, Hutchinson likes Orix Corp. (NYSE: IX). Hutchinson also likes the Aberdeen Chile Fund (NYSE: CH).

Domestically, Hutchinson says investors should seek out dividend aristocrats – stocks that have consistently paid out and raised their dividend for 20 years or longer.

"These types of stocks represent the ultimate safe haven for your money," Hutchinson said. "Their share price and even earnings may decline, but their dividends should continue to increase."

Hutchinson singled out four particularly strong dividend aristocrats — companies that have paid or increased dividends for 50 years or more, and pay a dividend yield of at least 3.5%.

"Having survived every recession since 1962, they can be expected to survive the next one," Hutchinson said.

Hutchinson has cautioned, however, that you shouldn't think simply picking a stock with high yield alone is the best way to recession-proof your portfolio.

In fact, since Hutchinson knew the economy would enter recessionary conditions, he built a detailed strategy that not only preserves your wealth, but can make you money over the long-term.

Click here to check out Hutchinson's plan for creating a permanent income stream for any environment.

Promos talk about 2 new recommendations to new subscribers……………….available to existing members???? Where?