Americans will be united in heading to the polls today (Tuesday) to decide who will win Election 2012 and be the next president and vice president. After months of experts, news reporters and the candidates inundating us with a barrage of facts and opinions, voters have the last word.

Research finds that historically Americans' say has been swayed by very recent stock market performance. Last July, I covered the work of Adam Hamilton from Zeal LLC, who analyzed that the market has typically determined whether an incumbent leader wins. He used InvesTech research dating back to 1900 to look at market results covering the two months leading up to the presidential election.

The majority of the time, when stocks rose in September and October, the incumbent party was reelected; when equities dropped, the incumbent typically lost. He discovered that "out of the last 28 presidential elections, this simple indicator has proven correct 25 times. This is an astounding 89 percent success rate!"

This shows that Americans "make political decisions based on how our families are faring economically," he explained in an October update on this topic. The stock market, as a proxy for the broader U.S. economy, "heavily influences how we cast our ballots."

However, during September and October of this year, the S&P 500 Index rose 0.40%, which makes it too close to call an incumbent win. This "essentially dead flat" result has made the few days leading up to the election "super-important."

Adam says, "We all figured it would be a close race in our heavily-divided country, and the stock markets are certainly exacerbating this with their schizophrenic September-October ride."

There has also been a close relationship between President Obama's approval rating from Gallup and the performance of the S&P since he took office. Immediately after President Obama took the oath, there appeared to be an inverse correlation between the stock market and the approval rating while the president enjoyed a "honeymoon" period. We "had high hopes his leadership would bolster a rapid economic recovery in America," says Adam.

However, following the honeymoon, "Americans' views on the job President Obama is doing have been closely tied to the fortunes of our stock markets." Beginning in mid-2010, as the stock market rose, the approval rating for the president climbed; when the market corrected in 2011, so did the Gallup poll. 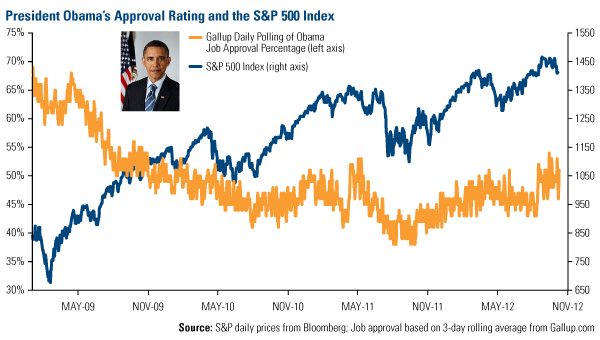 What's interesting is that while the S&P has climbed an outstanding 68% over the president's term, the president's approval rating sits at only 51% as of the end of October 2012. This weak approval has been attributed by several experts to stagnant job growth, a slowing global economy, weak U.S. GDP growth, and a mountain of rules and regulations that have hindered businesses over recent years.

Alan Zafran of Luminous Capital believes that these reasons are why "CEO confidence remains listless, lethargic and dispirited."

Will CEOs Decide Who Will Win Election 2012?

According to the YPO Global Pulse Confidence Index, which measures executives' perspectives on the business climate, leaders' confidence around the world, except for in Latin America, "fell modestly over the past three months and remains in largely uninspiring territory." As you can see, a majority of CEOs responded that there would be no change in their businesses' employee count and fixed investment.

He indicates that the most important reason for a slump in CEO confidence is that "uncertainty relating to America's tax code and regulatory environment as well as its health care and retirement systems – particularly in the face of our nation's "fiscal cliff' – has stymied many American CEOs' willingness to add jobs and buy business equity today."

Zafran concludes his article by calling for "meaningful fiscal action" to get the U.S. economy out of its "financial ditch" and raise the confidence of CEOs. As I often say, it's not about the political party, it's the policies.

Regardless of which candidate wins, Goldman Sachs' research shows that the market is indifferent during the president's first year. As you can see in the chart below featured on Business Insider's website, since 1976, the S&P has experienced a median return of 10 percent over the twelve months following the election of both a democrat and a republican. 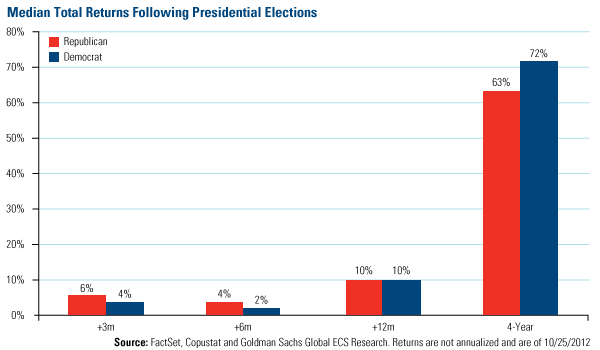 How is Energy Affected By Who Will Win Election 2012?

If President Obama is reelected, it could be a negative for certain energy companies involved in natural gas fracking, says International Strategy & Investment (ISI).

The research firm put together an "Obama Portfolio" which includes sectors such as taxes, defense, discretionary spending, energy and infrastructure. ISI says that companies "highly leveraged to fracking and onshore drilling in the U.S." could be negatively affected "if regulatory costs are substantially higher in a second Obama term."

Conversely, a Governor Mitt Romney win could be significant for energy companies. In its "Romney Portfolio" ISI's rationale is that Romney and the GOP "will try to do more to promote traditional forms of energy, including offshore drilling, approving the Keystone pipeline, and exploiting the nation's coal resources."

U.S. Global's Director of Research John Derrick also discussed the impact of energy companies as well as tax policy differences between the two candidates with AdvisorOne.

After casting your ballot, make sure to tune into our post-election webcast where I'll be discussing the questions that have been on investors' minds with Money Morning Chief Investment Strategist Keith Fitz-Gerald. We'll talk about a variety of issues, including the "fiscal cliff," the housing recovery and the future of energy prices.

Don't miss it! Add to your calendar today – and check out Fitz-Gerald's Election 2012 analysis here.

I don't want either of them Idiots to be presidents.