If you've been following my advice, you avoided the carnage at the fumbling tech giant, Hewlett-Packard (NYSE:HPQ)

In fact, I told my Radical Technology Profits readers on Sept. 18 not to buy into the hype that H-P was becoming a great turnaround story.

That was after I wrote in this Money Morning article from January that H-P was one of the five tech stocks to avoid. It's lost over half of its value since then.

And had you used my Real Demand Tracking System to check out this stock, you would have seen for yourself that H-P was a lousy investment.

No, I didn't have any insider source that warned me about the accounting scandal rocking this Silicon Valley giant.

It runs deeper than that -- the fundamentals and the technicals were just plain horrible for what is clearly a deeply troubled stock.

In case you missed the news, H-P got crushed last week, falling more than 11% on word that the firm is writing down some $8.8 billion in the most recent quarter.

I know, the party line is that H-P got hoodwinked when it bought the U.K. software firm Autonomy. Seems a whistle blower has now come forward to say Autonomy's accounting practices made the company a financial house of cards.

But as I see it, there was plenty of reason for HP to have been more cautious.

They were so hell-bent on trying to find new revenues outside of their hardware business they blundered into an ill-fated merger.

This is what happens when you throw spaghetti on the wall to see what sticks. I mean, you have to know a company is confused when it goes through three CEOs in as many years.

Here's a hint for high-tech leaders. When Larry Ellison tells anyone who will listen that a merger candidate is too expensive, heed the advice.

As the CEO of Oracle Corp. (NasdaqGS:ORCL) Ellison is about as good an M&A expert as you'll find anywhere. He's bought dozens of firms over the past decade.

If Ellison can't find a way to make a merger pay off, pretty much nobody can.

Here's the thing. The accounting scandal is a symptom of the problem, not the trouble itself.

Don't get me wrong. I'm not saying these guys are complete idiots. It's just that they focused on computer sales for far too long.

Note to H-P's executive suite -- you missed the mobile wave. Now what?

Just look at these lousy numbers from the quarterly report:

So, let me ask you this: Where's the good news?

It certainly isn't in the charts. Indeed, in a recent webinar on how to use charts to improve stock profits I gave for Radical Technology Profits subscribers, H-P served as a prime example of the type of stock to avoid.

My system relies on a series of exponential moving averages to show the real demand for a stock. I then add other indicators that I will be talking about in future webinars.

The next webinar is on Wednesday, by the way. It's free and you can sign up for it by clicking here. 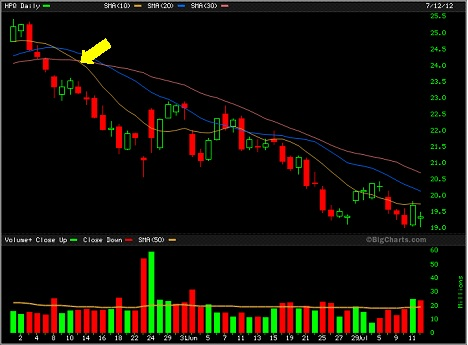 For those of you who missed the last session, I've included a chart that shows a pretty clear sell signal back in May as marked by the yellow arrow. The 10-day average falls quickly below the 30-day as volume picks up.

I hope you stayed clear of H-P because we haven't gotten a confirmed buy signal since then.

That's why I say it pays to look for stocks that have a good blend of fundamentals and technicals. As you can see for yourself, H-P had neither.

Let me close by noting that at some point, when it's "stupid cheap," H-P may be a good buy for us. But trust me, now is not the time.

As a contrarian, I have looked into HPs turnaround story, not by reading noise that passes for information, but by seeking out information that is indeed information. The difference exists and has been clearly articulated by non other then Fischer Black who has discussed the difference between noise and information trading. Mr. Robinson what you have done is what most financial journalists do: They focus on a very narrow band of information that generates either fear or greed in the target audience. As HP begins to turn around, and it will for reasons that you have failed articulate, the business journalists like you will keep the public mind fixed on the negative aspects of this story. While the truth will be discounted in a higher stock price a price that will begin to gain momentum without public participation

You've got all the Buzz Words down pat.

Care to ennunciate why HP will "begin to turn around"?

Care to enlighten us with a time frame?

Don't trust anyone involved in the stock market unless he was your best man, your best friend and is an experienced broker. Other than that, it is still a risky business for low-end investors.

Mr Kurtz…succinctly said…Now, the proverbial question is where, when, and how does one go about finding a trustworthy-knowledgeable financial- adviser/planner/broker in these tumultuous times for low end investors?

I am so very disappointed in the conduct and the service of H.P. that I am instatuting a complaint in that regard. They have fallen from a fine company to a disgracefull facsimaly of it's former self.
I can't say its the fault of Mrs. Whitman ; or some of knuckle heads she put in place . The very sorry state of the support and service departments , here , in the PHILLAPHINES , INDIA or in Calif.
Is just the front page of a failing Corporation . When the "CONSUMERS" are deliberately denied contat with "ANYONE" ; in upper management ,by gate keepers ; It's time to put such a compay in the garbage can . It stands to reason , IF they can'T or won"T talk to the CONSUMER ,They have no business ; IN BUSINESS . So good riddence !!!!!!