Morgan Stanley awarded gold the "best commodity for 2013" while Goldman Sachs called the end of the metal's hot streak.

After seeing 11 consecutive years of positive performance from gold price, one needs to be wary of research analysts' price forecasts, as they have consistently underestimated the shifting dynamics driving the precious metal higher.

Take a look at analysts' annual predictions of gold prices, which is "a telling picture," CEO Nick Holland of Gold Fields told the crowd at a mining conference last summer.

From 2006 through 2011, Bloomberg's contributing analysts have forecasted that future gold prices would be lower. "The analysts who keep telling us the gold price is going down have been wrong seven years out of seven. That's a remarkable track record!" says Holland.

Take a look at the chart... 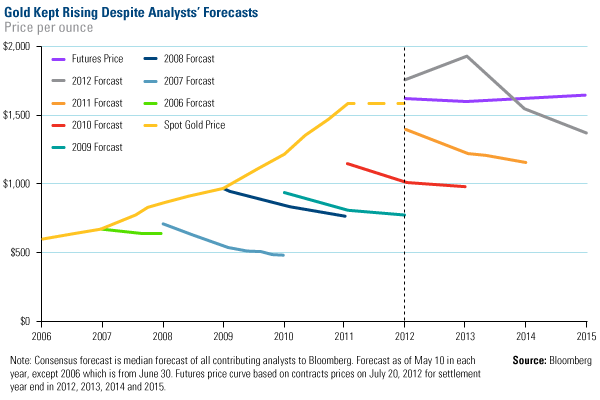 It is worth keeping gold's DNA of volatility in mind as the day-to-day price of gold naturally fluctuates, of course.

Based on 10 years of data as of September 30, 2012, over any 20 days, there is a 7 percent chance of a 10 percent change in the gold price. Swings have historically been more frequent for gold equities, moving 10 percent up or down about 30 percent of the time over the same time frame.

The Advantage of Gold Mining Stocks

The upside to gold stocks is that investors historically have received a 2-to-1 leverage by owning gold equities instead of the commodity.

We believe that effective management can help miners gain more leverage over the metal for their shareholders.

Picture gold prices as a pulley with gold company executives applying force on one side of a rope. The more disciplined and successful the management, the bigger the potential boost in gold equity returns.

In recent years, gold mining companies have been facing the dilemma of trying to grow their production profile while also depleting their current resource base.

As I explained to Mineweb in a recent podcast, no miner wants to show investors that their production profile is in decline, so there has been a huge push to grow gold production.

However, this "growth for growth's sake" mind frame has resulted in a congested intersection of projects in the pipeline.

Take a look at the chart that National Bank Financial (NBF) put together showing an "unprecedented wave" of projects that mining companies are planning over the next decade.

Each dot represents either a gold and precious metals project or a base metals and iron ore project. The bigger the dot, the larger the estimated cost of the project.

The 2006 through 2010 construction history benchmarks the engineering and construction industry's capacity to build new mines. Relative to the size and number of new projects in the pipeline, the current pool of expertise to build these projects is quite limited. 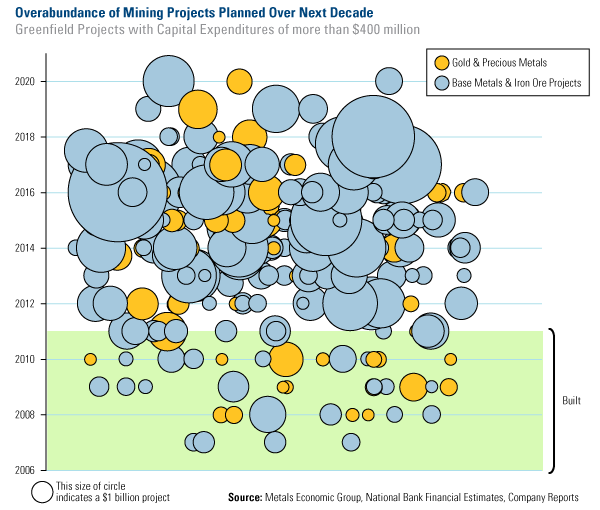 NBF's mining analysts indicate that about 30 projects can be completed in a two-year time frame.

The critical shortage of technically skilled people has been driving up the cost of projects and resources. "Mines that used to cost $2 billion only a few years ago, now cost $5 billion," and the beneficiaries of these projects have not been shareholders, but contractors, employees, consultants, governments and equipment suppliers, says Stifel Nicolaus' George Topping, a well-respected analyst with years of experience in capital markets.

In his research, "Don't Build It And They Will Come," he analyzed the projects that four senior miners, Barrick, Goldcorp, Kinross and Newmont, have in the pipeline, looking at the capital expenditures, cash costs and internal rates of return to determine whether he thought the projects should be continued or deferred.

Of the 14 he looked at, only five projects were worth pursuing, in his view. Instead of spending the money on these projects, "senior producers would be able to pay higher dividends, say yielding 5 percent at current prices," according to Stifel. A monthly or quarterly dividend program shows that gold miners have a pulse and are taking disciplined action in paying back some of their capital.

The Fairytale Land of Cash Costs

The other factor that has been hurting gold miners is the outdated use of a cash costs measure which doesn't reflect the true costs of mining.

In the Mineweb podcast, Ralph and I discussed these "cash cost fairytales," with Ralph pointing out that only governments believe gold miners have seen a windfall profit from the rising price of gold. He says,

"You've got to thank your cash cost marketing for basically taxing 50 percent of your gains away in the form of taxes when the government has risked no capital on the project and not borne any of the risks during the construction of the project."

Research indicates that an "all-in cost" is much more indicative of the true cost of mining, as it takes into consideration operating costs, sustaining capital, construction capital discovery costs, and overhead tax along with acceptable profit.

For example, CIBC's research calculates that a sustainable number for mining an ounce of gold would be $1,700.

These factors highlight the importance of active management, as gold companies that are successful at executing what they've articulated to the public should be more effective at leveraging the price of gold.

In addition, as Brian explains to The Gold Report, "The precious metals market is surprisingly inefficient," meaning that active investors should be able to take advantage of dislocations in the market.

I have been involved as an active investor in mining industry for past 20 years and am very interested in your information. Kind regards, Ros

What should I do if I no nothing about investing. But have aquired a large amount of jewelry over time but can't eat it . And don't no how to really male it work for me I'm a simple guy . I thought it was a smart thing years ago but don't no what to do when things are tuff. Like now injured can't work no insurance. Any help would greatly be apprecatted..: thank you