Gold prices in 2013 are already expected to top $2,200, and adding fuel to that price surge is an accelerating trend in the global economy.

The term currency wars describes a race between many of the world's central banks to make their currencies worth less relative to other currencies, with the goal of increasing exports by making them cheaper.

Such a strategy becomes less effective as more countries join in the battle, but a growing currency war has another effect that investors can exploit: As central banks devalue their currencies, they create inflation and cause hard assets like gold to rise against them.

Fortunately for gold investors, most of the world's central banks, from the U.S. Federal Reserve to the Bank of Japan, are expected to further step up their currency devaluation in 2013.

"Implementation of the European Central Bank's Outright Monetary Transactions, andfurther Bank of Japan easing -- both of which we expect - [will] support gold, aswould a weaker outlook for the yen, which competes with gold as a flight-to-qualityasset," wrote UBS analyst Edel Tully in a recent research note.

Why Currency Wars Will Get Worse in 2013

While the central banks' easy money policies have been aimed at stimulating their own sluggish economies, the effect has been to strengthen other world currencies, particularly those in emerging markets.

That has made their exports more expensive, hurting their economies. And they've had enough.

"Advanced countries cannot count on exporting their way out of the crisis at the expense of emerging market economies," Brazilian Finance Minister Guido Mantega said at an International Monetary Fund Meeting last week. "Brazil, for one, will take whatever measures it deems necessary to avoid the detrimental effects of these spillovers."

Emerging economies are also uneasy about the recent election of Shinzo Abe as Prime Minister of Japan. Abe and his Liberal Democratic Party are expected to push for as much as $120 billion of stimulus spending plus call on the Bank of Japan to print piles of yen.

"It's almost obscene what they're talking about doing," John Mauldin, chairman of Mauldin Economics, told The Daily Ticker.

He added that with a shrinking and aging population less able to absorb Japanese Government Bonds (JGBs), "they're going to have to print and print in size and level that will make what Fed and European Central Bank [have done] look small." 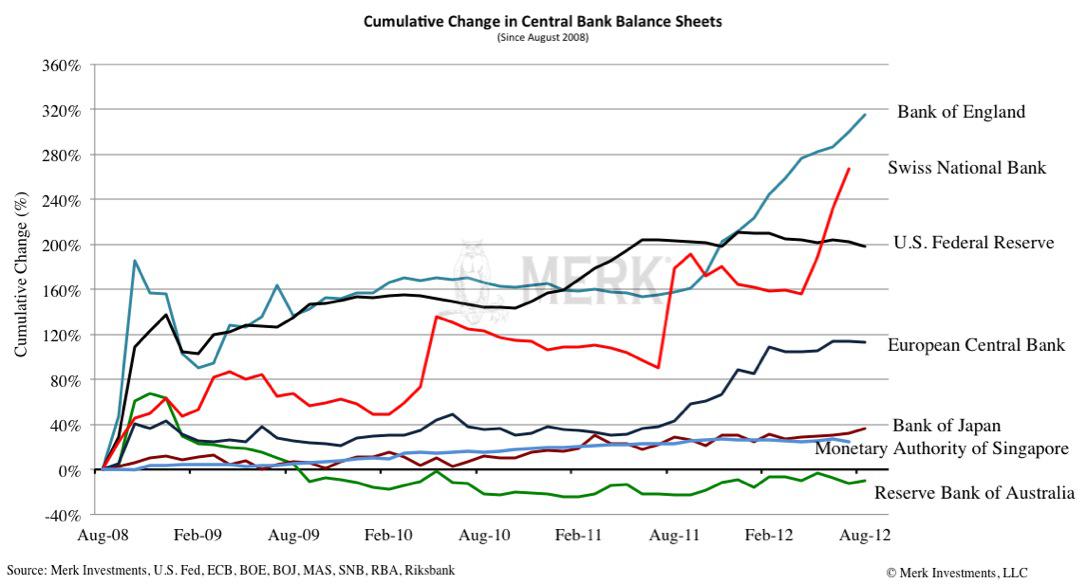 As the slow global recovery continues to put pressure on central banks in both developed as well as emerging economies, an escalation of the currency wars in 2013 appears unavoidable.

"You can see, month by month, the number of countries who feel that active exchange rate management, always to push their exchange rate down, is growing," Bank of England Governor Sir Mervyn King warned in a speech at the Economic Club in New York earlier this month. "My concern is that in 2013 we'll see the growth of actively managed exchange rates as an alternative to the use of domestic monetary policy."

Another Way Central Banks Will Move Gold Prices in 2013

For the past two years, many central banks have also been buying up more and more physical gold, partly as a form of defense in the currency wars.

Krauth believes the actions of central banks, plus several other factors, will push gold prices to $2,200 in 2013.

For more on where gold and other commodities are headed in 2013, click here.

How to Profit From Rising Gold Prices

With gold prices rising in 2013, the only remaining question is how best to profit from the situation.

Because it's not always easy for retail investors to buy commodities like gold and silver directly, those seeking to profit from the 2013 currency wars might want to look at mining stocks and exchange-traded funds (ETFs).

Among the top ETF choices:

Gold miners have not risen proportionally to gold prices over the past year, but that could change in 2013, Krauth said, as previous investments in expanding their reserves begin to pay off.

Some ways to play gold mining stocks include: