As the bull market tries to enter its fifth year, many are wondering if it still has legs - but a handful of stock market charts warn there's high risk of a coming sell off.

In fact, a recent report from Credit Suisse Group AG (NYSE ADR: CS) outlined 10 technical factors that show the market is at its most risk-on level since just before the stock market crash that began in 2007's third quarter.

"Many of our tactical indicators point to a consolidation phase in the equity markets, in the near-term," Credit Suisse Global Equity Strategist Andrew Garthwaite said in a note to clients.

For a closer look at this bearish forecast, check out these five stock market charts pointing to a pullback. 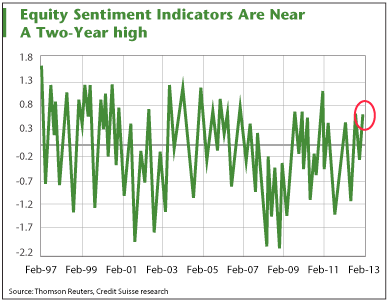 This stock market chart clearly shows investor enthusiasm is on the rise. The bulls will argue that the enthusiasm is warranted and the economy is improving, even if slowly.

But there's little doubt the rising stock market is masking our long-term debt and spending issues. The question is just how much longer the market can rise before a serious correction occurs. 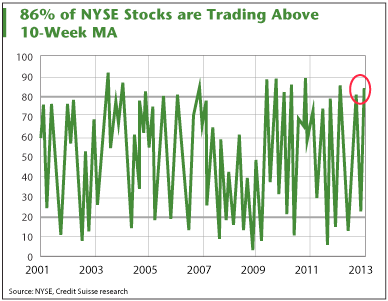 The fact that more than 80% of stocks are trading above their 10-week moving average, near all-time highs, is an indication of an overbought market. 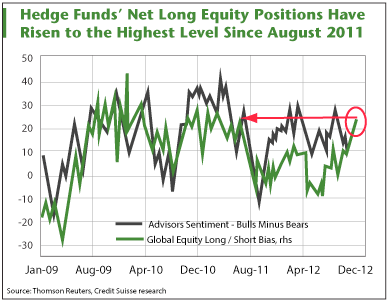 If you're a contrarian or think some hedge funds and Wall Street experts end the year losing to the S&P for a reason, this is your chart.

This chart is more evidence that euphoria is widespread among investors, even hedge fund managers. Their net long positions are nearing two-year highs and are much more bullish than their collective sentiments. 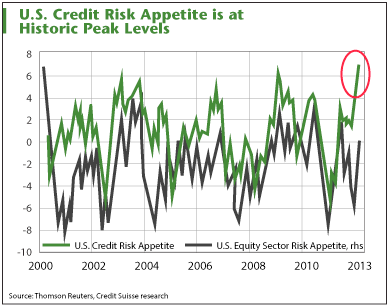 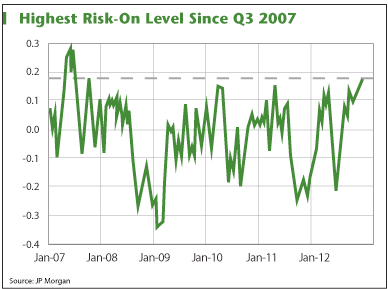 As you can see, the level of risky positions continues to rise and we have been more speculatively positioned only once - when stocks peaked in the middle of 2007.

The "risky" assets are copper, the GSCI commodity index (heavily weighted in energy), the Australian, Canadian, and New Zealand dollars, the Russian ruble, Mexican peso and an aggregate index of equities based in the three major U.S. stock markets and the Nikkei. "Safe" assets include gold, the VIX, the Japan Yen, the Swiss franc, silver and an aggregate of U.S. Treasury and eurodollar futures, as well as an aggregate U.S. dollar index.

So how can I track these charts, what are the sources?

I just read Shah Gilani's article, also in an Agora publication, that now is the time to gradually work into equities. This article seems to suggest just the opposite. Is this a Goldman case of taking both sides, in this case to avoid being wrong?