During these first days of January, many adopt an "out with the old, in with the new," approach to shed bad habits or extra pounds.

Washington opted for its same ol' strategy when averting the "fiscal cliff," as the addictive nature of "can-kicking is a transatlantic sport," according to The Economist.

The magazine suggests that the deal made in the 11th hour is "disturbingly similar to the eurozone's." The short-term fix did "nothing to control the unsustainable path of "entitlement' spending on pensions and health care … nothing to rationalize America's hideously complex and distorted tax code… and virtually nothing to close America's big structural budget deficit."

In the end, politicians agreed to end the payroll tax cut and raise taxes on the top earners; altogether, tax increases will total $162 billion in 2013.

According to a Bloomberg article, it's the first time since 1990 a Republican leader agreed to a boost on tax rates. The legislation also represents the largest tax increase in two decades, says the Wall Street Journal.

One negative consequence resulting from the new bill is an immediate hit to Americans' spending cash.

International Strategy & Investment (ISI) anticipates that the impact will occur in the first quarter of this year, with real disposable personal income (income after taxes and inflation) decreasing by 3.8 percent, says ISI.

Avoiding the "fiscal cliff" initially calmed the market, with equities and gold beginning to rally before the ink was dry.

On January 3, I appeared on Fox Business to discuss the impact on gold and whether the yellow metal had the strength to increase for the 13th year in a row. I said that the lack of fiscal austerity combined with monetary reflation would keep fueling gold throughout 2013.

However, the Federal Reserve poured a bucket of cold water on gold after its minutes were released, with some members documenting their wish to stop quantitative easing (QE) before the end of 2013. While this appears to be a negative for gold, keep in mind that the Fed has always been divided, but when opinions diverge, leadership prevails, says ISI's Roberto Perli. Chairman Ben Bernanke, along with William Dudley and Janet Yellen, continue to hold the belief that more accommodation is required.

In addition, the conflicting comment was made in the context of the labor market, so if we see QE end by the middle of this year, "it will be because the economy is getting stronger, and that would be a bullish development," says Perli.

Regardless, we are seeing developed countries' central bankers adopting very unconventional monetary policies these days, and "the base case for investors must remain that, when the pressure is really on, the choice will be made for yet more easing and yet more bailouts," says Christopher Wood from CLSA.

It's likely that the latest round of easing by the Fed was because Bernanke anticipated a reduction in spending and wanted to offset the hit taken by the consumer due to the tax increases. And historically, during times of QE, money flows to riskier assets.

A few weeks ago, I showed how money was heading to emerging markets, and it's worth repeating, as the trend has continued in the New Year. 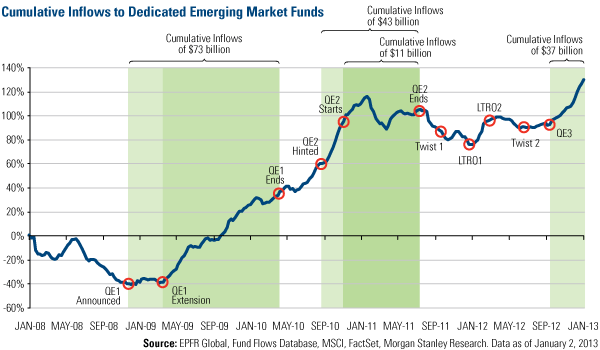 Back in April 2012, I suggested that if you apply the principle of mean reversion, history appeared to favor China's H shares to land in the top half of emerging markets on an annual returns basis.

With a new leadership in place and its economy improving, investors have begun to gain confidence in the Asian giant, and in response to the significant flows, equities in China began to outperform other emerging countries, ending the year as a top-half performer on the Periodic Table of Emerging Markets. 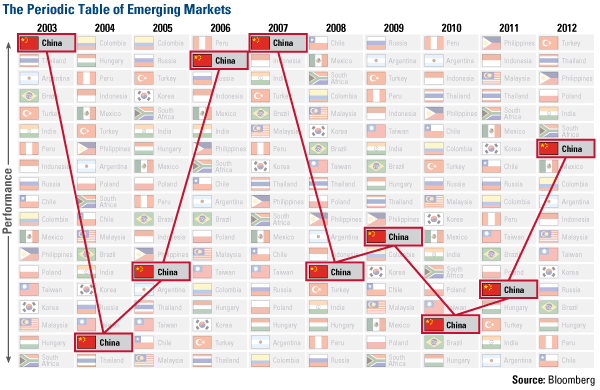 Is it part of your New Year's resolution to improve your investment portfolio?

To help you accomplish that task, join our Outlook Webcast on January 9 at 3 p.m. CT. Our team of experts will be discussing ways investors can find opportunity by following monetary and fiscal policies as well as seasonal and cyclical patterns occurring in global markets and natural resources.