Every year Money Morning comes out with our forecast that predicts the market action for the next 12 months.

It's built on a system that Chief Investment Strategist Keith Fitz-Gerald spent over 10 years perfecting. He calls it the "Geiger Index."

Based on "fractal theory," it's similar to models used to predict hurricanes, interpret digital satellite data and even avert cyber attacks. It works by looking for patterns so complex they are beyond traditional analytics.

The amount of raw data this program crunches is extremely large. In fact, it takes a series of computer servers 14 hours to produce a forecast that covers the next 12 months.

Just last year for instance, the Geiger Index correctly forecast the movement of the S&P 500 right down to the month. According to last year's forecast:

And as Keith noted in late 2011, "Dips will generally be buying opportunities." Looking back, they certainly were.

So what does Keith's Geiger Index forecast predict for 2013?

I've put together the entire projection in one simple chart along with Keith's key takeaways for the year below. 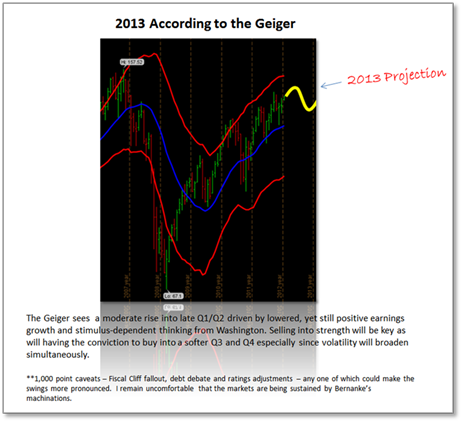 First, let me explain the chart. Using market data from around the world, it projects the market forward in 2013 using the S&P 500 as a proxy.

What's important is the yellow line. It marks the projected pattern that the Geiger Index "sees" for 2013.

What you notice from the projection is that there will be a gradual run higher into late Q1/Q2. Over this time frame the S&P 500 will likely peak for the year.

After that, the Geiger Index predicts that the markets will soften considerably going into Q3. Knowing these moves in advance will be key.

According to Keith, "the selloff is going to test everybody's patience, but the good news is that it shouldn't last too long."

Beyond Q3, the Geiger sees momentum building into Q4. That potentially includes a sprint into year-end that's similar to what we just experienced at the end of 2012.

Keith's Key Takeaways From the 2013 Forecast

As you might suspect, there are a couple of key takeaways when it comes to your money.

We'll be sharing more specific looks at some of the more popular asset classes in the weeks ahead, including gold, oil and even some of the media darlings like Apple, Amazon and Home Depot. So stay tuned.

In the meantime, though, let me leave you with one final thought.

What's critically important is that you take the time to develop a plan that will allow you to easily adjust your tactics to changing market conditions.

Armed with information provided by the Geiger Index, it's easy once you can tune out the noise. Consistent gains are absolutely possible when you understand what's probable.

To learn how you can take direct advantage of the Geiger Index - and join in our 4-year anniversary celebration of the Geiger's astounding track record, starting today, just go here.

I am very interseted in keiths work on the fractals and the geiger index.
I am based in europe and before joining i need to know a) how trades are done and b)
can i do them from a european bank and c) who has access to the accounts of trades done.
kind regards,
ray phillips

All good questions, Mr. Phillips. Our VIP Services team will shoot you an email today – or you can call 1.410.622.3004. They’re available Monday through Friday, between 8 am and 5 pm EST.

YOU have given us the chart for last year. Maybe you realise that we are aware of what happened last year. What you did not show was you prediction for next year.

James, look again at the chart. There's a yellow "squiggle" to the right that picks up where 2012 left off. That's the Geiger's prediction of the market path through 2013.

Looks to me that a fortune is almost assured, just playing S&P options….assuming ithe predictions are as accurate as presented….

Living in Italy we are not yet able to trade options in the USA. It's a pitty because I am interested in the Geiger's prediction for 2013. The projection is that there will be a gradual run higher into late Q1/Q2.
1) Does that mean late March or late June?
2) In the projection I therefore do not see a market correction in February due to the debt-ceiling discussions?
Regards
Torben

I'd like to know where Geiger's members could find this chart. As a member I didn't receive it!