Apple Inc. (Nasdaq: AAPL) is certainly no stranger to impressive numbers. But even if Apple were split into four separate companies, each would be impressive in its own right.

Apple's four major divisions – the iPhone, the iPad, the Mac, and the iTunes Store – rake in so much revenue each that they would rank individually in the top half of the Fortune 500.

The iPhone business, with fiscal year 2012 revenue of over $80 billion, would rank 29th in the Fortune 500, ahead of such tech titans as Microsoft Corp. (Nasdaq: MSFT), Amazon.com (Nasdaq: AMZN) and Google Inc. (Nasdaq: GOOG).

The $32 billion iPad business is no slouch either: It would rank 95th – bigger than Time Warner Corp. (NYSE: TWX).

Even Apple's Macintosh computer business, though overshadowed by its mobile cousins, also has grown into a mighty money-maker. The Mac business pulled in over $23 billion in FY 2012, which would make it 125th on the Fortune 500.

And the iTunes Store – typically thought of as just a support system for the iPhone, iPad and iPod businesses – generates a ton of revenue when you include all the developer and media vendor revenue that passes through the store. (Apple only reports the cut it takes in its earnings.)

According to Horace Dediu of Asymco, all revenue transacted through iTunes Store adds up to a stunning $12 billion annually.

The chart below shows where all of AAPL's businesses would rank in the 2012 Fortune 500, which was released last May. 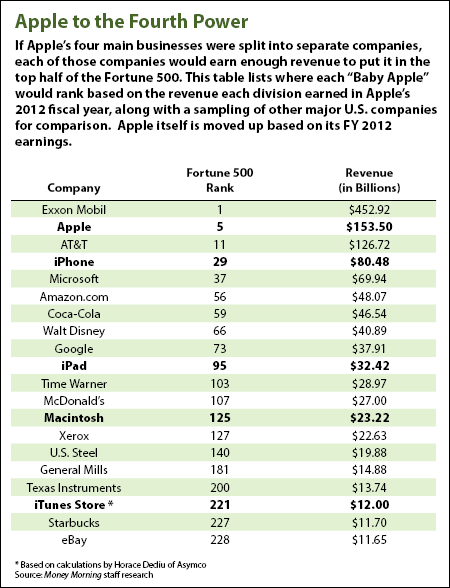