After hitting its 12th straight year of new highs, gold prices got off to a bumpy start in 2013.

"Dr. Doom" Marc Faber even came out Tuesday with a reduced price prediction for gold.

In a CNBC "Squawk Box" interview, Faber said, "I don't think [gold] will go up right away, and we maybe have a correction of 10 percent or so on the downside."

Faber had also estimated a gold price range in his JanuaryMarket Commentary of "... perhaps down to between $1550 and $1600."

But any gold price correction would be a short-term move. Even Faber admitted central bank action is a reason to bet on higher gold prices for the long term.

That's why investors should look at any price correction in gold as an opportunity to stock up.

By Thursday, the yellow metal jumped 1% after the European Central Bank left interest rates the same and the euro rose against the dollar. The February gold contract jumped $20.90 (1.3%) to $1,676.40 per troy ounce.

Additional trends boosting gold this week include the rise of Indian gold imports as traders placed their buy orders prior to the anticipated increase in the country's gold import taxes. They are expected to rise to 5% - 6% from 4%.

China also delivered bullish news for gold, as it swooped in this week to buy up the yellow metal on lower prices. Trading volumes for physical gold hit record highs on the Shanghai Gold Exchange.

These are just the latest in a slew of catalysts for higher gold prices, as Money Morning Global Resources Specialist Peter Krauth outlined last year.

Feverish Growth of Fiat Money: The U.S. and most of the developed world is printing money faster than the amount of new gold being brought to the market; printing presses are bullish for gold.

Feverish Demand for Gold: As central banks continue printing money, individuals keep feverishly buying gold, notably in the world's two most populous nations, China and India. When combined, they accounted for more than half of world gold demand through 2012's third quarter.

Central Banks are Buying: Central banks, especially in developing nations, are buying and keeping gold at a rapid pace. Through the end of November, they bought 493 tons, surpassing 2011's 457 tons.

This is believed to be a long-term trend, further supporting higher 2013 gold prices.

According to Barrick Gold Corp.'s (NYSE: ABX) CEO Jamie Sokalsky, the entire industry spent a record $8 billion last year for gold exploration. Even with large resources to hunt for gold, discoveries fell. Bloomberg reported that in 1991 there were 11 gold discoveries but by 2011, there were only three.

When you have this imbalance, prices rise.

Krauth's Favorite Reason for Gold Prices to Hit $2,200: The majority of analysts frequently forecast prices too low and are predicting declining gold prices farther out.

But data has shown they've been consistently wrong. For years. 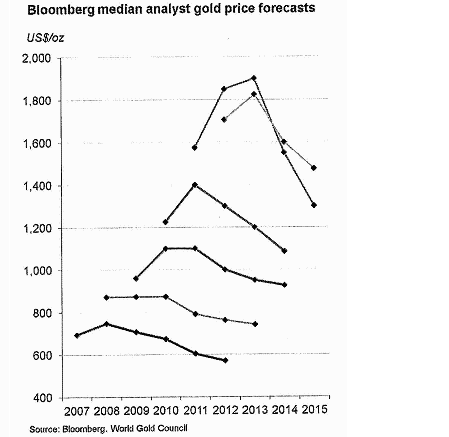 i am interested in the news letter. it makes good reading. please send to me regularly.